All about Hoi An Self-guided Tour 2019

Formerly known as Fai-Fo, Hoi An is one of the oldest cities in Vietnam and has been a populated harbor town since the 7th century, when the Cham people controlled this strategic spice port at the mouth of the Thu Bon River. An important trading center in the 16th and 17th centuries, the city was a divided town, with the Vietnamese population mingled with Portuguese and Dutch settlers on one side of the river and the Japanese settlement on the other. Now a popular tourism destination in Vietnam, Hoi An is an historic town that has seen the rise of bars, hotels, and resorts to cater to the huge influx of tourists from around the world. 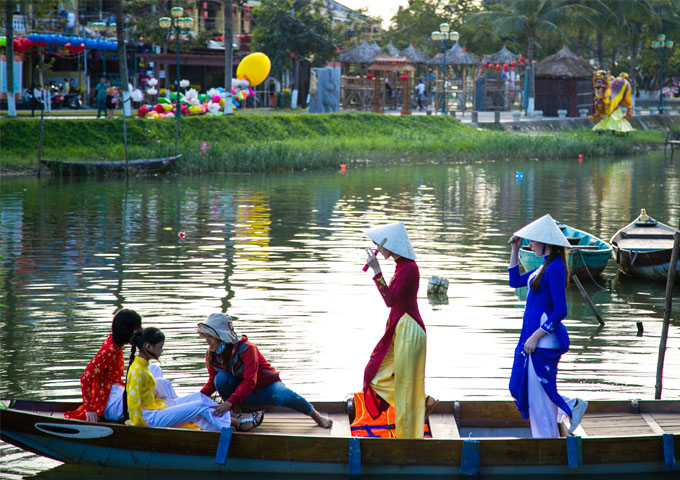 One of the few cities in the world that has attained UNESCO World Heritage Site status, the Old Town district of the city is one of the most well-preserved examples of a trading port in Southeast Asia. With its location on the mouth of the river, the city has grown as tourism has increased, and activities such as kayaking and boat tours have become increasingly popular. Tourists travel to the city to enjoy the history and culture of Hoi An, as well as the unique local cuisine, a blend of several centuries of influences from China and Japan, as well as other countries in Southeast Asia. The city is also famous for the monthly Hoi An Lantern Full Moon Festivals, a celebration to honor their ancestors, which takes place on every cycle of the full moon. For a first-timer to Hoi An, you would be amazed at the breathtaking sights of the city, as well as the amazing history of the area around the river mouth.

Check for more about 8-days Vietnam tour including Hoi An.

When to visit Hoi An?

Lying on the coast of Vietnam, Hoi An is a city that lies in the Central Region of the country, which has a different climate in Vietnam  to that of the south and the north. The Central Region of Vietnam has distinct wet and dry seasons, and the weather is warm throughout the entire year, unlike the north, which has four seasons and gets cold in the winter months. The dry season in Hoi An runs from around January to August, with the long and humid wet season running from September to around mid-January. June to August is the hottest time of year, when temperatures can reach as high as 38 degrees, and the city has an average annual temperature of around 29 degrees.

The rainy season is the most annoying time of the year in Hoi An, which is longer and later than in most Southeast Asian countries that are subject to the Southwest Monsoon. Throughout the rainy season, heavy showers are a constant factor of everyday life, and flooding is a normal occurrence in many parts of the area around the river mouth. Temperatures range from 19 to 24 degrees in the rainy season, which is fairly cold for this region of Southeast Asia, though more than comfortable for tourists from higher in the northern hemisphere. 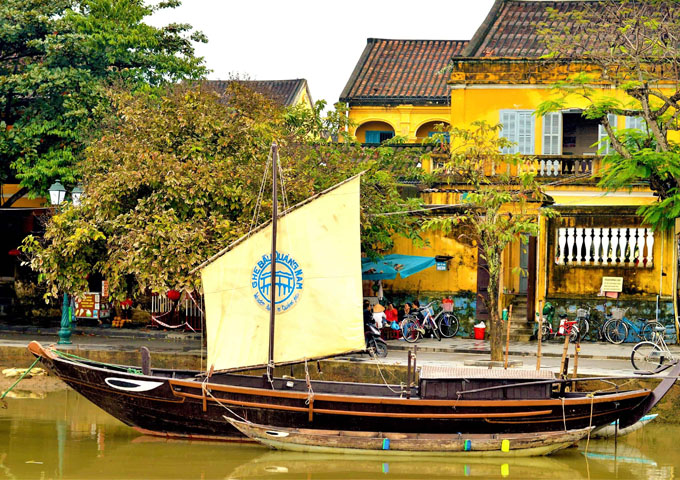 The Central region of Vietnam is also subjected to numerous typhoons from September to December, as it lies in the area of Asia known as the Inter Tropical Convergence Zone, a low-pressure belt that is highly prone to typhoons throughout the year. October and November are the peak months for typhoons in Vietnam, and there is a huge decrease in tourist numbers during this dangerous time of year on Vietnam’s central coast.

Overall, the best time to visit Hoi An would be from February to May. The weather is milder than in the latter part of the dry season, with temperatures hitting a cooler 24-28 degrees, with very low humidity and virtually no more rain. The sunshine is warm and pleasant, though not too hot, and for those looking to explore the area of Hoi An and the surroundings, it is an ideal time to visit. If you are looking for that relaxing beach holiday at Cua Dai Beach or An Bang Beach, you might want to delay your trip until around the end of May or into June, when the weather starts to get hotter.

How to get to Hoi An?

For most travelers to Hoi An, it normally comes as part of a longer tour, traveling through the country to visit the many amazing cities and sights of Vietnam. However, it is entirely possible to travel almost direct to Hoi An by flight from outside Vietnam via the Da Nang International Airport. Da Nang has flights from all across Asia, including Hong Kong, Singapore, and Bangkok, though no flights from outside Asia itself.

If you are thinking of traveling from Hanoi or Ho Chi Minh City to Hoi An, then flights are the easiest and fastest option, though you can find long-distance buses that run routes up and down the coasts. However, these buses can take days to travel to Hoi An, and can be expensive with the constant connections and changes. Flights run daily from both Hanoi and Saigon to Da Nang, and take less than 30 minutes. Alternatively, the rail links from both Saigon and Hanoi take around 15 hours to reach Da Nang, the closest railway station to Hoi An.

Located just 30 kilometers to the south of the Da Nang International Airport, Hoi An can be reached easily by bus or taxi. Buses from Da Nang run several times a day to Hoi An, and can cost from around 100-110 thousand dong (4-5 dollars) for the 45-minute trip. There are several bus companies in Da Nang that run open-top and deluxe buses to Hoi An, which is the better option despite being a little more expensive. 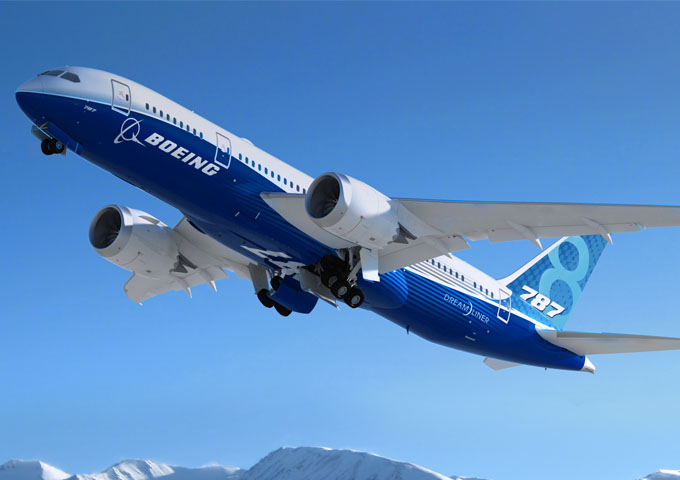 The local yellow buses, with no air-con and hard seats, also run to Hoi An from central Da Nang itself (not from the airport), and can cost as little as 20,000-30,000 (around 89 cents to as much as $1.29, with luggage) dong per person. However, it is common for the drivers of these buses to try and bump up the price for foreigners, and you may end up paying as much as the air-con bus costs, without the comforts.

Taxis are often the most popular option for travelers heading to Hoi An from Da Nang, and the journey from the airport to Hoi An by taxi takes just 30 minutes. The most reliable airport taxis for a trip to Hoi An are the green-liveried Mai Linh and Vinasun taxis, and the metered fare should be no more than 300,000 dong, or around 12-13 dollars. If you are already booked into a hotel or guesthouse in Hoi An, you may find it cheaper to arrange a private transfer through them, which can cost as little as 220,000-250,000 dong ($9.50-$11.00).

Top things to do in Hoi An

A unique UNESCO World Heritage Site, Hoi An has a wealth of things to see and do that can take several days to complete. However, since few people get to stop in this beautiful city for more than a day or two, we have taken the top attractions for travelers in Hoi An that will make your visit to the city worthwhile.

Known as the Cau Chua Pagoda, the ancient Japanese bridge that spans the river between the Vietnamese areas and the Japanese settlement in the city is one of the most famous attractions of the city. A perfect example of ancient Japanese architecture, the bridge dates back to the early 1700s, and was built by the Japanese settlers to give them a trade link to the Chinese and Vietnamese communities on the other side of the Thu Bon River. Adorned with sculptures of dogs and monkeys, the bridge was built with a roof to protect the merchants from the sun and rain, and includes a small temple inside dedicated to the god of weather, Tran Vo Bac De. 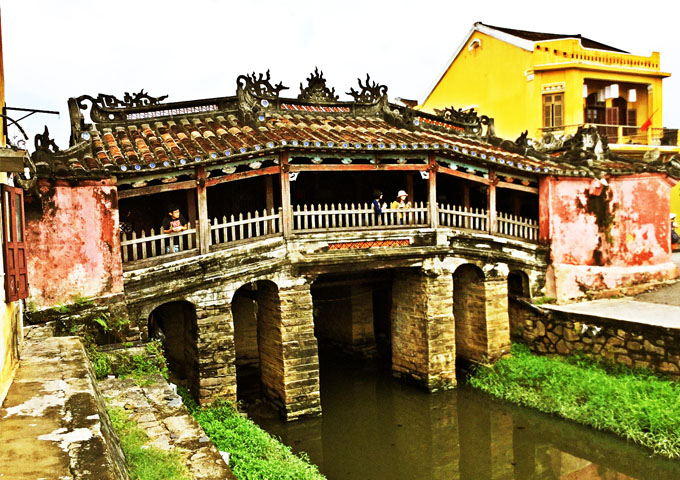 While this may be an obvious attraction in Hoi An, it really is a necessity to get out into the Old Town and wander through the narrow streets and alleys, past pretty ancient houses that line the sides of these photogenic streets. The Old Town in Hoi An is a place where the multitude of people going about their daily lives makes for some of the most amazing photographs. Women balancing baskets full of goods or clothes on their heads, lines of rickshaw drivers touting for customers, and the scenery of the ancient buildings themselves makes for an amazing and spectacular sight. Hoi An is a multi-cultural city, with Vietnamese, Chinese, and Japanese influences, and this can be seen through the streets of merchant houses, restaurants, and temples. The best time to explore is towards dusk, as the streets are lit up with a myriad of colorful lanterns. 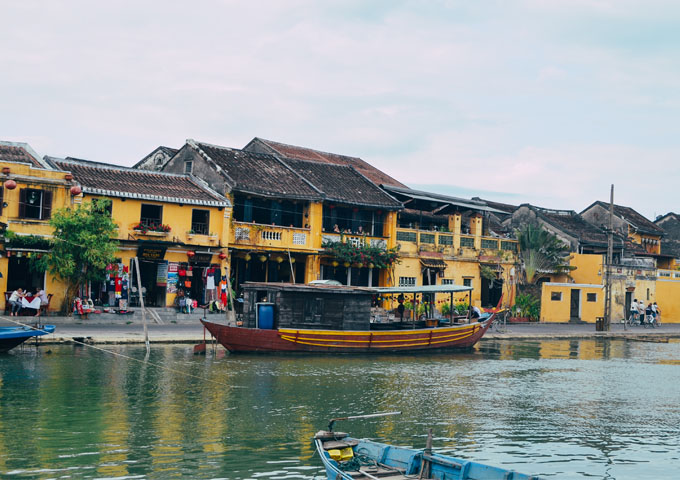 See the lanterns in An Hoi Market

Across the river from the central area of Hoi An lies An Hoi, where you can find one of the most amazing and beautiful night markets in Vietnam. While other products may be available here, the market is renowned for its silks and silk lanterns, and the famous lanterns are on lit display throughout the entire night. Locally made from the famous Hoi An silk, from across the river, the sight of the lanterns hung on every stall in the market and lit up throughout the night is one of the most stunning sights in Southeast Asia. 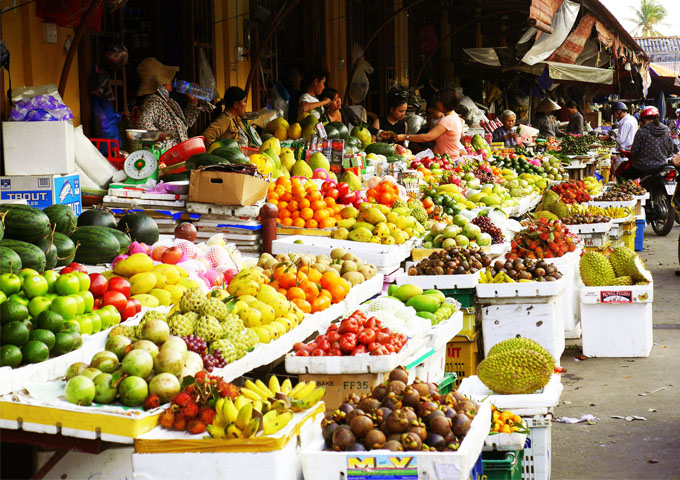 Get a new suit of clothes

Hoi An is renowned for its tailors, and visitors to the city can order a complete new wardrobe for their travels, which can be made for you within around 48 hours. There is an overwhelming choice of fabrics and styles to choose from, and in the tailor’s district the whirring of the old Singer sewing machines pervades the noise of the streets. The town is also famed for its embroidery, popular with Chinese merchants in the 18th century, and the small silk village on the edge of the town is famous for the delicate silk fabrics they produce. 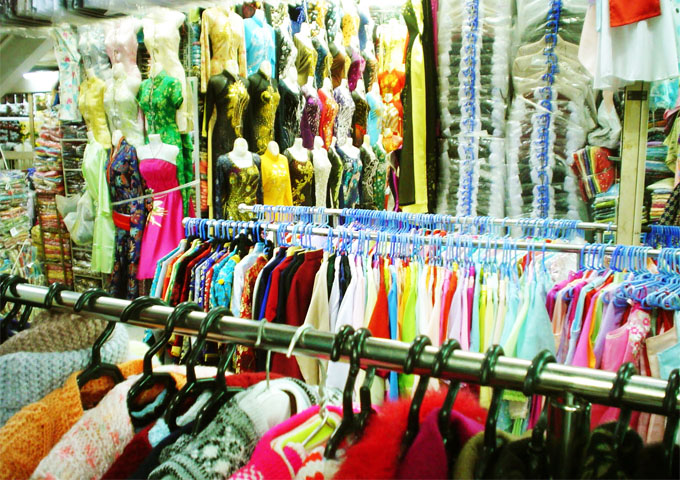 Take a trip to the My Son Ruins

A collection of Hindu temples that date from the 4th to the 13th centuries, the UNESCO World Heritage Site at My Son has been largely abandoned for almost a millennia. Covering an area of around 140 hectares, the site was a major influence on Vietnamese culture for several centuries. However, by the end of the 13th century, the temples were left to rot into ruins, as few people ever took to the Hindu and Buddhist religions in Vietnam. The site has been part of a major conservation project in the country since 1999, and is now one of the most popular tourist attractions in Central Vietnam. 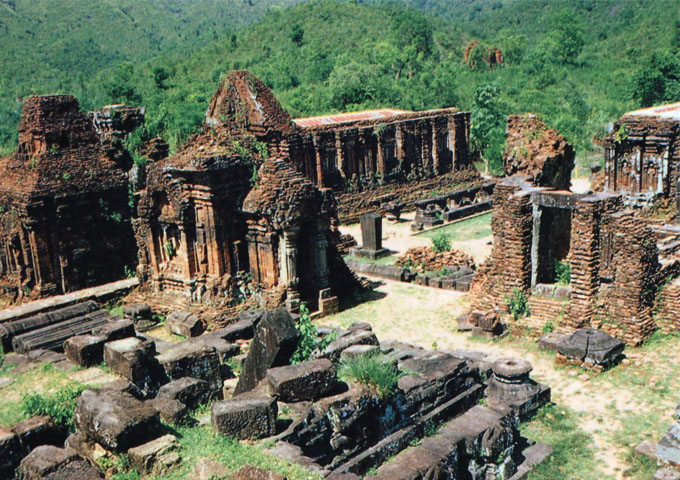 Hoi An may be a little harder to get to than many of the top cities in Vietnam, but it is well worth the extra effort taken to reaching this beautiful city that was left undeveloped and almost forgotten for almost 200 years during the rise of the rest of the country. From the stunning sights of the night market and the covered bridge to the delicious foods and delicate silks, there is more to this ancient trading port than meets the eye at first glance. So if you are thinking of a trip to Vietnam, then including Hoi An as a major stop for a few days is a must.