First designated as a Renowned National Landscape Monument in 1962 by the Vietnam Ministry of Culture, Halong Bay was given UNESCO World Heritage Status in 1994, which was updated in 2000 for the outstanding geological and geomorphic value of the karst formations. The site was placed on the World Monuments Watch in 2012 because of the tourism and development that was damaging the area, and in the same year, Halong Bay was listed by the Seven Wonders Foundation as one of the New Seven natural Wonders of the World. 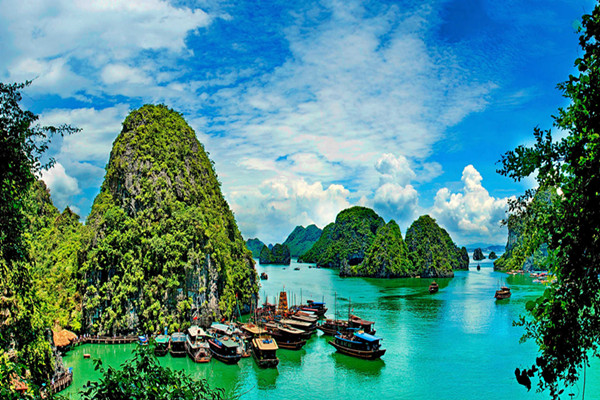 Renowned as the most popular tourist destination in Vietnam, for both international and domestic tourists, Halong Bay in the Quang Ninh Province of northern Vietnam is one of the most beautiful locations in Asia. A unique UNESCO World Heritage Site, the area is made up of the bay to the southeast of the capital city of Hanoi, and is filled with amazing karst rock formations, small islets, and stunning beaches. Thousands of limestone karst formations and small islands of various shapes and sizes fill the small bay, with beautiful beaches on some of the larger islands and boat trips around the islands and through the many caves in the bay.

How to Get to Halong Bay?

Getting to the bay can be done in one of a number of ways, including traveling by private car, tourist bus, and local bus, and depending on where you are traveling from, by train. From Hanoi, the bay is around 165 kilometers to the southeast, and a road trip from Hanoi to Halong bay takes around 4 hours. Coaches or tourist buses are the most popular way to get to the bay, as there are plenty of buses that run from the Vietnamese capital daily. 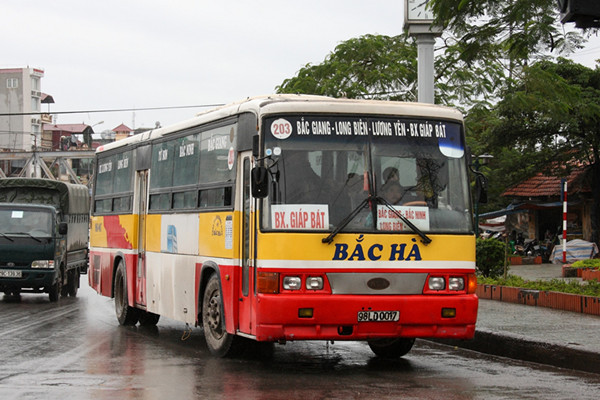 Buses leave from the My Dinh Bus Station, Gia Lam Terminal, and Luong Yen Terminal in Hanoi daily, several times a day, and the price of the tickets is around 100,000-200,000 dong (4-8 US dollars). The coaches and tourist buses do not go all the way to the bay itself, but stop at the terminal near Bai Chay Bridge. From there, a motorcycle taxi to the Tuan Chau Marina at the bay usually costs around a dollar, and takes less than ten minutes.

It is possible to book a private car to take you to the bay from Hanoi, and there are a huge number of travel agencies with private car hire that will be able to provide a good service. However, the cost is more than ten times that of a bus. Cruise packages from Hanoi also run two-way transfers by bus and minibus to the bay, the cost of which is usually included in the cruise price. 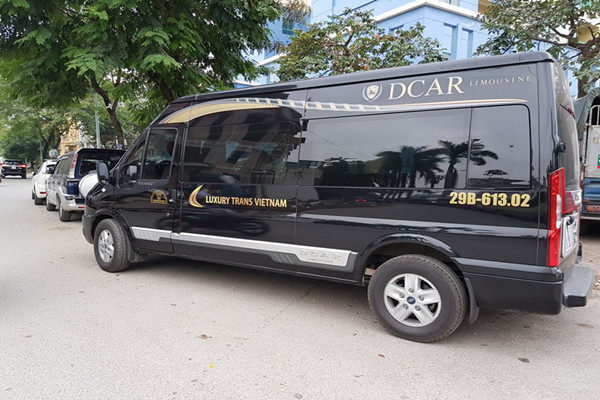 The latest way to get there is by seaplane from Hanoi. Since 2014, seaplane tours of the bay have been available from Hanoi, although they are the most expensive way to see the bay. The flight from Hanoi takes around 45 minutes each way, and you only get around 15 minutes of touring over the bay in the seaplanes.

If you are traveling from Hai Phong, the third largest city in Vietnam and the second largest in the north of the country, then your trip is one of only 75 kilometers, and can be done easily by bus, coach, or taxi. The Lac Long Terminal, in the Hong Bang District of Hai Phong operates six return trips to Halong Bay daily, seven days a week, and the cost depends on where the bus drops you. Terminals in Halong Nay are at Bai Chay, Cua Ong, Cai Rong, Cam Pha, Hon Gai, and Mong Cai, and the two-way tour costs from 40,000 to 100,000 dong (US$ 1.72 to US$ 4.30).

There are also plenty of taxis in Hai Phong that will take you to Halong Bay, and you should negotiate the price before getting in the taxi, as the drivers will charge what they feel like if you do not. The average price for the taxis from Hai Phong to Halong Bay is around 800,000 dong, or about 35 US dollars, each way. For four people traveling together, this is actually a relatively cheap option for the comfortable ride you get. 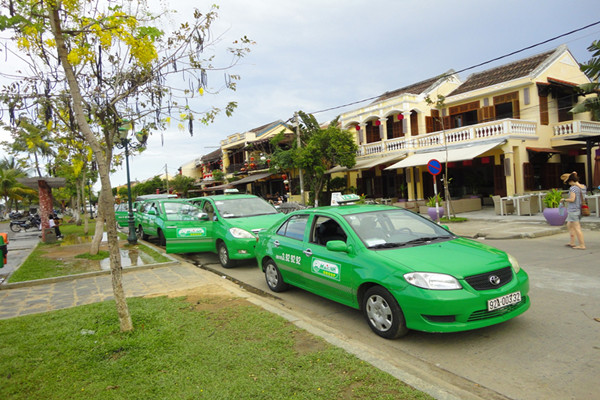 Check for more about how to get Halong Bay from Singapore.

When to visit Halong Bay really depends on what you are expecting from the trip, and what weather you are prepared to put up with. If your main concern is the weather, then the periods from September to November and March to May are the ideal times to head for the bay. The weather is dry and pleasant, with comfortable temperatures that will allow you to experience the best of the area. For most tourists, this is the best time of year as you have all the weather benefits with fewer tourists.

For those that are budget-minded, taking the trip to Halong Bay from May to September is a good option, as this is the low season for tourism in the area. Cruise ships offer a huge discount of up to 40 percent off on their cruises in these months, which makes the period popular with budget travelers and backpackers. However, July and August are known as the heaviest of the monsoon months, and this time of year can often see violent typhoons and storms in the area, which can cause problems on your trip. The storms usually last no more than 3-4 days, at most, and the trip to Halong Bay can always be visited later. 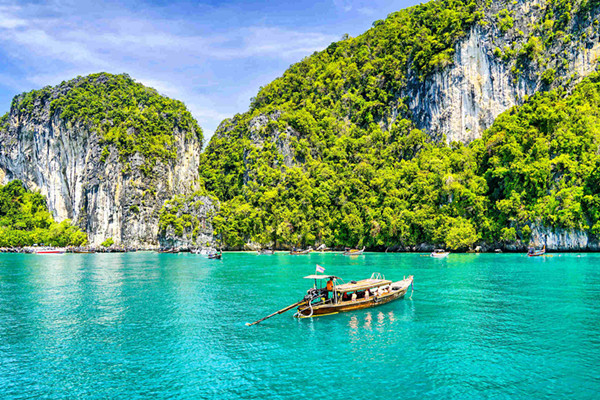 The peak season for tourism in Halong Bay is from December to February, and the weather at this time s normally dry and pleasant, without being too hot. Clear skies abound, and the chance of rain is almost zero, making it a great time to travel to Halong Bay. On the downside, this is the busiest period for tourism in Halong Bay, for both international and domestic tourists, and the area is usually very busy, with crowds of people vying for places o nthe boat tours.

Take a Cruise Around the Islands and Caves of the Bay

Halong Bay is not just a wide bay with some pretty rocks and islands, there are a multitude of things to do and see here, not to mention the unique cultures that live in the area around and even on the bay itself. One of the best ways to tour the bay is by cruise boat, and there are hundreds of boats in the marina that offer cruises around the bay. Most cruises last for a day or even two, while the cheaper cruises run for a half-day to a full-day, and cover only the most popular spots in the bay. Cruises also range from luxury to budget, and these can be booked in almost any travel agent in the area. 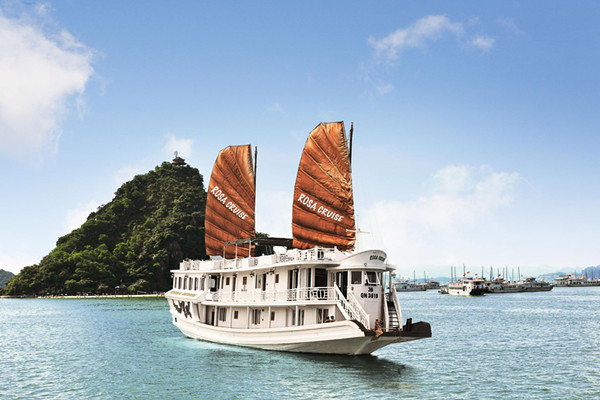 Cruises around the bay usually cover several different islands, as well as stopping at some of the beautiful beaches for some relaxation tine and taking the smaller boats to explore the caves that cover the various islands across the bay. Many of the caves can only be accessed by boat, and the cruises have smaller dinghies to transfer you into the caves, to explore the unique rock formations inside.

One of the most unique and special attractions in Halong Bay are the floating villages that can be found dotted around the bay area. These unique communities were made up of fishermen that have been living this lifestyle in the area for thousands of years, the small floating villages tucked away between the karst formations. The residents, who relied on fishing as their only source of income, lived all year round on the water. The villages are still in place in several places around the bay, although there are no longer any permanent residents due to government rules requiring them to live on land most of the year. Nowadays, these beautiful little villages are only populated for part of the year, but during this time, you can visit and see how their ancestors lived, following a lifestyle that is wholly unique to this area of the world. 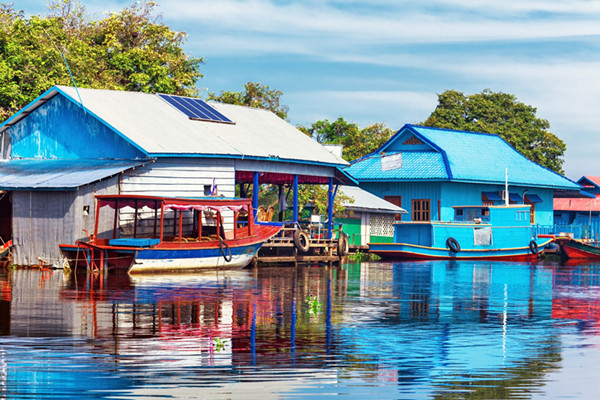 The village on the water. Tonle sap lake. Cambodia

Halong Bay is one of the most unique sites in the world, with its beautiful karst formations, stunning sandy beaches, and awesome islands. The bay is also a place where you can explore dozens of different caves, some of them entered from on the islands and karsts themselves, while others can only be accessed from the water, using small dinghies. Others are also only accessed by swimming underwater, though few of these can be visited, as the caves are too dangerous to swim through without diving gear. 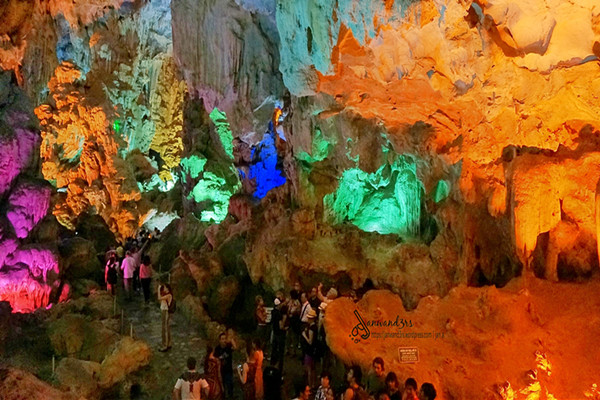 One of the most unique aspects of these caves is the colors. Several of the caves are brightly colored, as if painted by hand, and the multitudes of colors inside the caves are astounding. Created by water containing limestone that has filtered through other natural mineral resources, and leaked into the caves to form colorful stalagmites and stalactites, these caves are one of the most beautiful and wondrous sights on the planet. Akin to some strange alien landscape, the vibrant colors of the caves mix together to form a magical picture of Mother Nature at her most creative.

Whether you are traveling in the peak season or the low season, Halong Bay is one of the few places in the world where it matters little what time of year it is. Monsoon to dry season, Halong Bay is one of the most beautiful locations on the planet, and a place that is a must-visit destination in Vietnam. Small wonder it is popular with both international and domestic tourists all year round. With the bay being located so close to the Vietnamese capital there is no reason not to visit while you are in the northern area of this long and beautiful country.