Home > blog > Cambodian Cuisine’s Secrets: What Do You Know about Cambodian Food?

Cambodian Cuisine’s Secrets: What Do You Know about Cambodian Food?

Cambodian or Khmer cuisine is the traditional food of the Khmer people of Cambodia in Southeast Asia’s Indochina. A typical Asian cuisine that consists mostly of rice, an average meal in a Cambodian household normally consists of more than one dish, often with contrasting flavors and textures. Rice is the staple food of Cambodia, as it is with most Southeast Asian countries, and is eaten with every meal, including breakfast. Cambodia has more than 2,000 varieties of rice that were developed internally over the centuries by local farmers, and this staple food is also used as a popular street snack, with the popular deep-fried rice cakes being one of the tastiest of all the street foods. 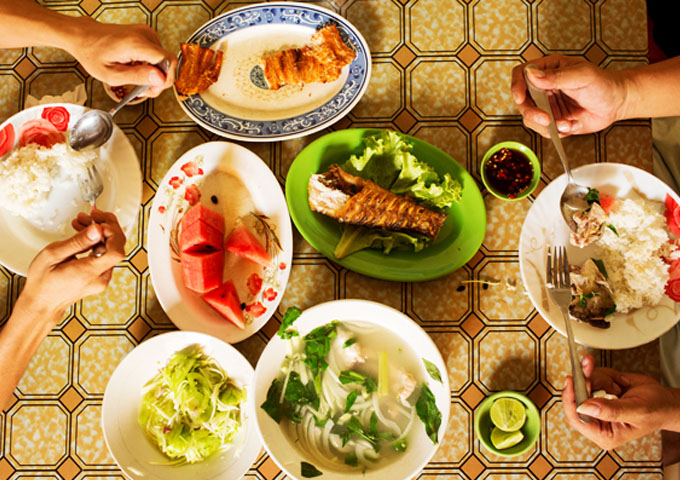 The origin of Cambodian cuisine

Developed over more than 2,000 years, Cambodian cuisine has been heavily influenced by the environment and the natural resources of the country. Water, rice, and freshwater fish have had the largest influence on the traditional Cambodian cuisine, and with the mighty Mekong River cutting a swathe through the country and the stunning lake of Tonle Sap being one of the major sources of freshwater fish, it is small wonder that fish features so heavily in modern Khmer cuisine too. Tonle Sap Lake is the beating wet heart of this ancient country, and is believed to have more fish than any other lake in the world.

Rice development in Cambodia comes due to the wet monsoon season, when the rains turn the country into a soggy marsh across all of the lower ground. Across much of the country, these flat lowlands turn into lush emerald-green fields of rice, and it is this vast area of wetlands, second only to Bangladesh in size within Asia, that have enhanced Cambodia’s development of rice as the main part of their diet. Even some of the dishes in Cambodian cuisine have that pond-like appearance, such as the tasty samlor or soups, which are usually filled with floating reed-like leafy vegetables that mirror the natural landscape of the monsoon season. 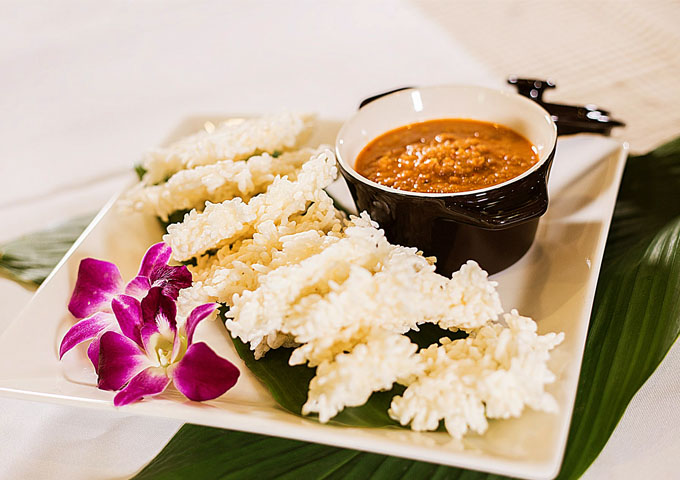 External influences on Khmer cuisine can be attributed to neighboring countries such as Thailand, who share some common staple foods, as well as Vietnam, which also shares some common dishes with Cambodia. However, the heaviest influence to modern Cambodian cuisine has to have come from both France and China. As the center of the French colonies known as Indochina in Southeast Asia, Cambodia saw a huge influence from the French national cuisine, and the ever-popular baguette, known in Cambodia as “nom pang”, is still a ubiquitous dish in Cambodia today. Served with pate, sardines, or eggs, they are a popular breakfast for city-dwellers in Cambodia, and can be found all over the country, buttered and stuffed with ham or any number of meats, often several together, and the famous Kampot Pepper. Noodles can also be found in many dishes across Cambodia, showing the heavy influence of China on their cuisine over the last 300 years since the French era.

The features of Cambodian cuisine

One of the main features of Cambodian cuisine, aside from its prominent use of rice at every meal, is the famous Cambodian “prahok”, a common ingredient in most Khmer dishes and almost a national institution. A fermented fish paste with a distinctive flavor, prahok is not just included as a flavoring in many Cambodian dishes, but is also used as a dipping sauce. This uniquely Asian condiment adds a salty tang to the food, and can be fried with the meats, used as a flavoring in soups and stews, or eaten as a dip with vegetables such as cucumber, aubergine, or green mangoes.

When it comes to spices, Khmer cuisine actually uses very few of the spices that you might find in Thai cuisine, despite Thailand having a large influence on Cambodian cooking. Black pepper is the condiment of choice in most Khmer dishes to give it a little heat, and is used in stir-fries, marinades, soups, and dipping sauces. The famous Kampot Pepper is the main source of spiciness in Khmer cuisine, and is known around the world as the King of Peppers. Local cardamom which grows in the Cardamom Mountains in the southwest is also lightly used in Khmer cuisine, mostly in samlor, or as a local medicine. Turmeric is used as an ingredient in Khmer curries, while saffron is normally used for its medicinal properties instead of as a food colorant. Tamarind and star anise are sometimes used in some soup dishes, and Cambodian cuisine also uses small amounts of palm sugar, galangal, ginger, kaffir leaves, pandan leaves, and lemongrass in several dishes, but never all together. 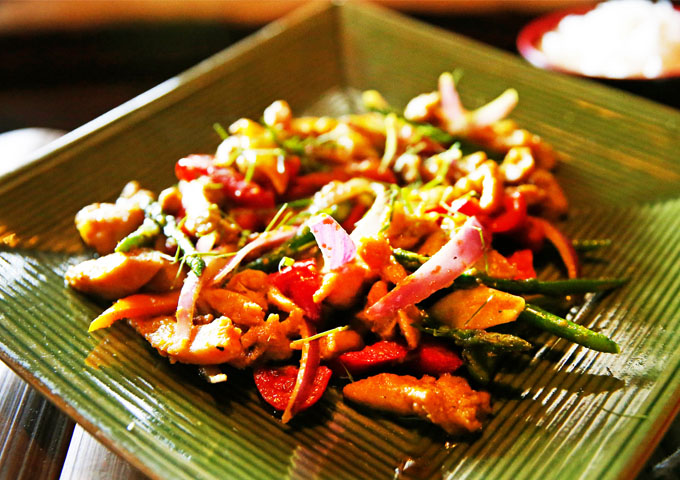 With a huge number of waterways, not to mention the Mekong River and the Tonle Sap Lake, fish has become a huge part of the daily diet for most Cambodians, and has found its way into more recipes than all of the common meats put together. Fresh fish is found in most places in Cambodia daily, it is used as the source for the famous prahok, and it is dried ad salted and known as “trei ngeat” and served with plain rice porridge. Even the most popular dish in Cambodia, for both locals and tourists, known as “amok”, uses a variety of catfish steamed in a savory curry with a coconut base.

While pork and chicken are common meats in Cambodia, they are not as widely eaten as vegetables, and vegetarian-style dishes are a major part of Khmer cuisine, often favored over meat and fish by the more devout Buddhists in the country. Many of the vegetables used in Khmer cuisine are also common in Chinese cuisines, such as winter melons, luffa, spinach, yardlong beans, bok choy, cabbage, bamboo shoots, radish, carrots, Chinese broccoli, and banana blossoms. Common dishes that use mostly vegetables include many of the soups, stir fries, some noodle dishes, and even some desserts. 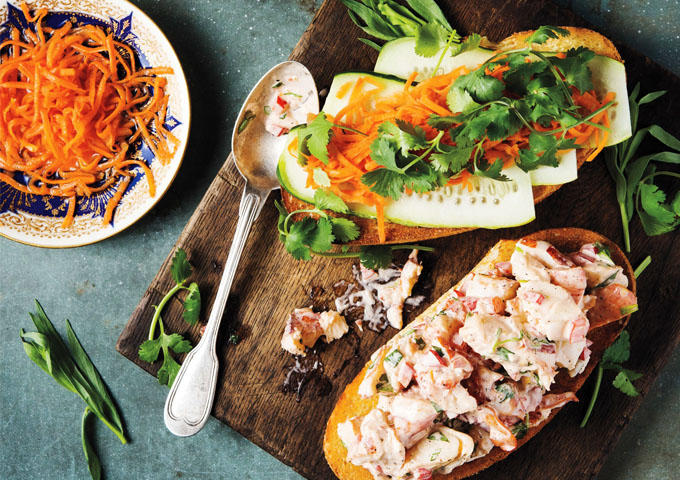 Fruits are also popular in Cambodia, and have their own place in Khmer cuisine, with almost all of the famous tropical fruits being grown locally, including pineapple, banana, coconut, guava, jackfruit, papaya, water melon, rambutan, etc. The more exotic fruits are also popular, and the oft-considered smelly fruit known as “durian” is classed as the “King of Fruits”. Meanwhile, mangosteens are classed as the “Queen” and sapodilla are known as the “Prince”, with milk fruit known as the “Princess”. 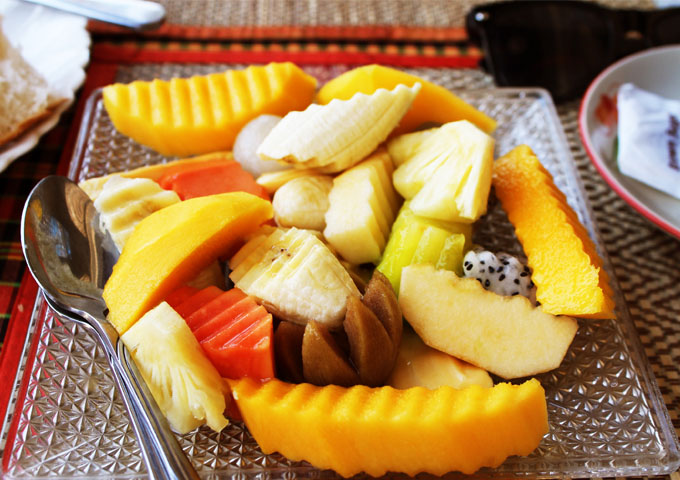 For most Cambodians, a typical meal consists of soups, noodle dishes, plenty of boiled white rice, and salads containing both fruit and vegetables. However, while there is a variety of dishes on the normal Cambodian table, you will never find a knife anywhere in the house. As with several Asian countries, most Cambodian’s eat with a spoon and fork, or when faced with a bowl of soup, a spoon and chopsticks. And, strangely to most westerners, it is considered impolite to actually put the fork in your mouth, as it is only used to push the food onto the spoon to eat with. Chopsticks are used for the solid elements of soups, and spoons for the liquid, and it is not done to use cutlery that has been in your mouth to get more food from the communal pot in the center of the table. And you should always remember that it is considered to be poor etiquette to leave your chopstick sticking up out of the bowl: always lay them down on the side of the bowl or the table once you are finished or when resting.

Table manners are also somewhat lacking by western standards, as eating with the mouth open, resting elbows on the table, or making slurping sounds when drinking your soup are common throughout the country. In Cambodia, making slurping, lip-smacking, or other noises is considered to convey your enjoyment of the meal you are eating. However, you should definitely not blow your nose at the table, though picking your teeth at the table is acceptable, just cover your mouth with your hand whilst doing so.

The most recommended dishes in Cambodia

Fish Amok is probably the top dish in Cambodia, and is eaten in great quantities by both locals and tourists. Made as a rich and creamy curry-like sauce that is perfectly balanced with ginger, turmeric, coconut milk, and lemongrass, this awesome dish is tasty but not spicy, and the fish literally melts in your mouth when cooked correctly. The dish is normally served wrapped in a banana leaf. 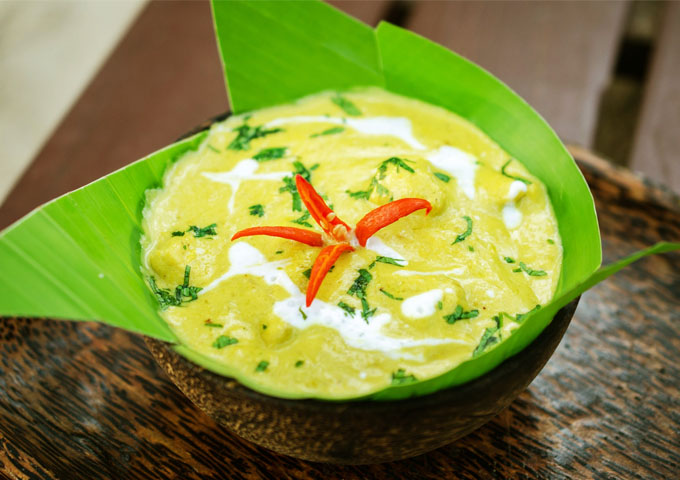 Banana Blossom Salad is one dish that can be found all across the country, and is a refreshing meal that contains fresh banana blossoms with shredded garlic and fried shallots, with aromatic lemongrass and topped with a little kaffir lime to add a little citrus flavor. 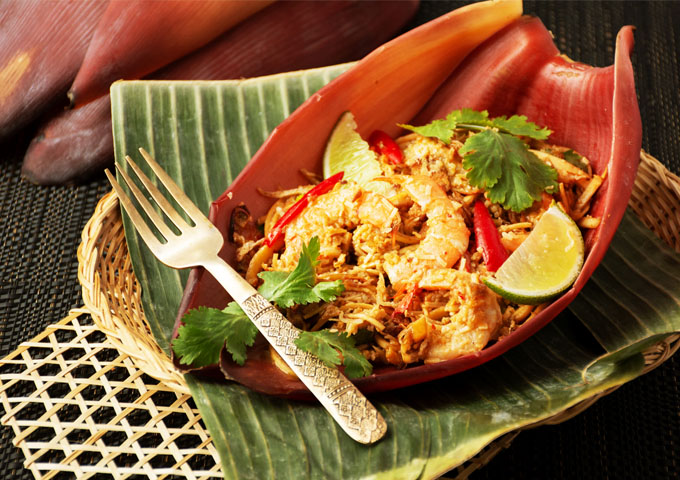 Lap Khmer is a Khmer beef salad marinated in kaffir lime, and is a local take on ceviche. Wafer-thin slices of beef are marinated in the kaffir lime with shallots, garlic, prahok, basil, mint, and bell peppers. This is then grilled, and served together with all the marinade, with chopped chilies on top. It can give quite a kick, so if you are not fond of spicy food, try something else. 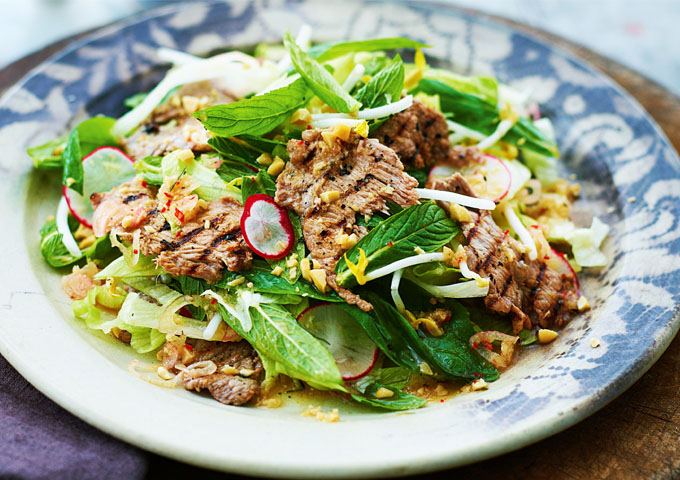 Nom Banh Chok is a popular breakfast dish in Cambodia, and can be found on every street stall all morning. Made from thin rice noodles covered with a dark green fish gravy made from prahok, lots of bean sprouts, banana blossom, cucumbers, and any other local vegetables available, it is served wrapped in banana leaf. A must-try dish, this strange concoction is a delicious start to the day. 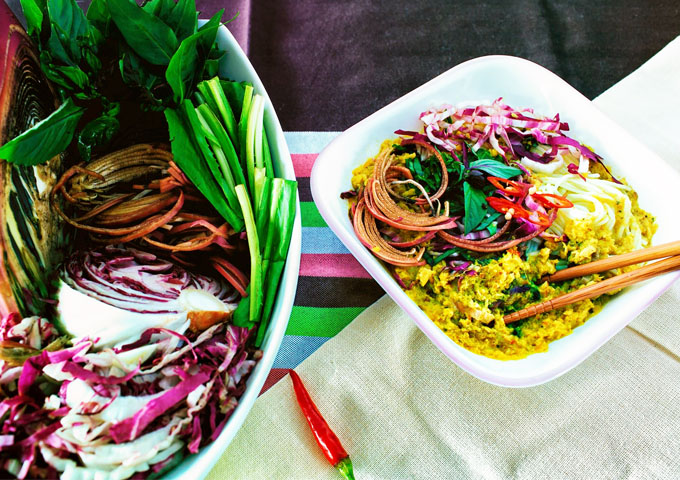 Kuy Teav, a tasty noodle soup, is another popular start to the day, and is made from stewed pork or beef bones and rice vermicelli. The rich flavored broth is topped with garlic and fried shallots, green onions and bean sprouts, and plenty of aromatic herbs, and balls of either fish or port added to the top. Often eaten with side dishes of kaffir limes, chili paste, and hoisin sauce, it is a delicious street food on the way to work. 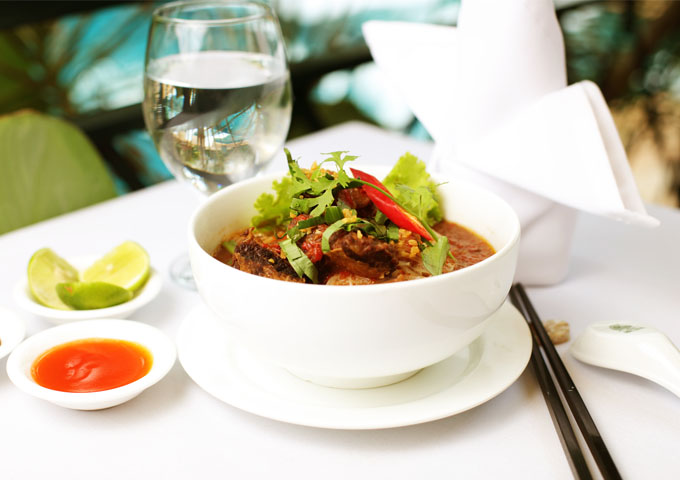 Lok Lak is an original Vietnamese dish that crossed the borders a long time ago and became overwhelmingly popular with the Cambodian people. The juicy stir-fried beef, which is the favored meat in Cambodia, is served in huge portions, topped with sweet tomatoes, cucumber, and fresh onions. Seasoned with lime and black pepper, this dish is served in a lettuce leaf, the traditional and classic way of eating fried or grilled foods in Cambodia. 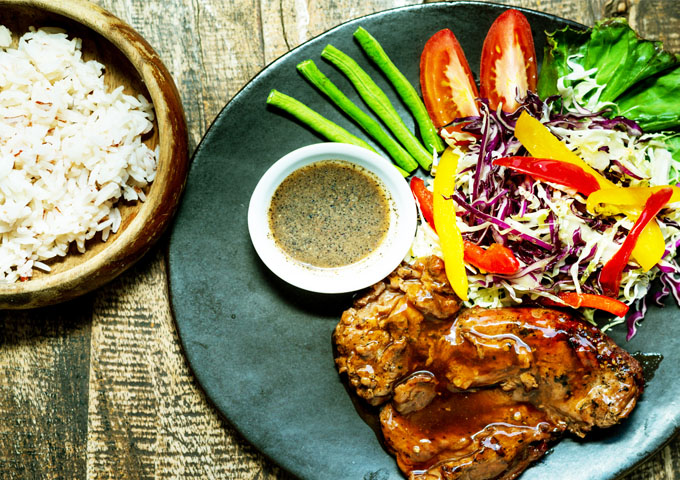 Balut, which is a snack that can also be found in several other countries in Southeast Asia, is kept simple in Cambodia. Made from the fertilized embryo of a duck, the duck egg is boiled with the partly –formed duckling inside, and is eaten straight from the shell with a little garnish alongside the egg and some coconut vinegar to add as flavoring. Rich in proteins and nutrients, this is the all-time favorite snack of the Cambodian people. 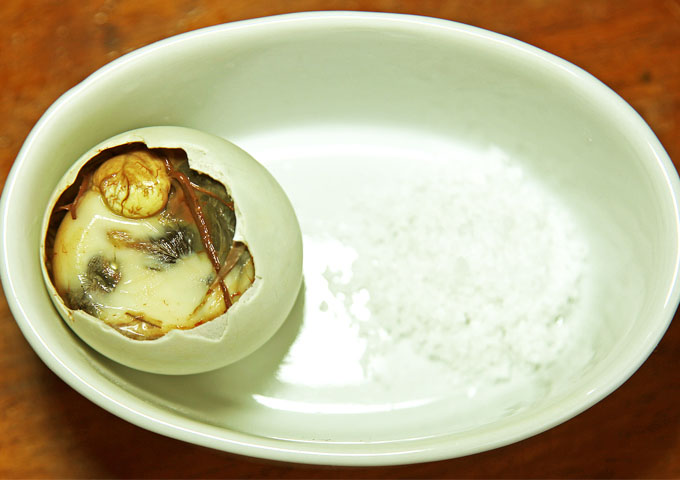 Cambodian cuisine is often overlooked in Southeast Asia, and regularly condemned to be “the same as Thai or Vietnamese food”. However, while these two countries did have some influence in Khmer cuisine, they are far from the same. Cambodian cuisine does not use the spiciness that can be found in Thai and Vietnamese cuisine, and favors vegetables and fish more than meat. Made from fresh ingredients and having a medley of delicious flavors, Khmer cuisine is typically mild, with a heavy use of pickles and condiments, especially the famous prahok. Any trip to Cambodia is delight to the palate and the taste buds, and while some of the dishes may sound a little strange, they are well worth trying, and as tasty and delicious as you are likely to get anywhere in Asia.