The Most Representative Festivals in Thailand That You Must Know

Thailand has long been a favored destination for western tourists, drawn in by the unique Thai culture, the beauty of the northern and central countryside, and the outstanding beaches that form a major part of the income from the tourism industry in Thailand. For more than 50 years, Thailand has been one of the top destinations from the United States and Europe, with millions of travelers pouring into the country every year. 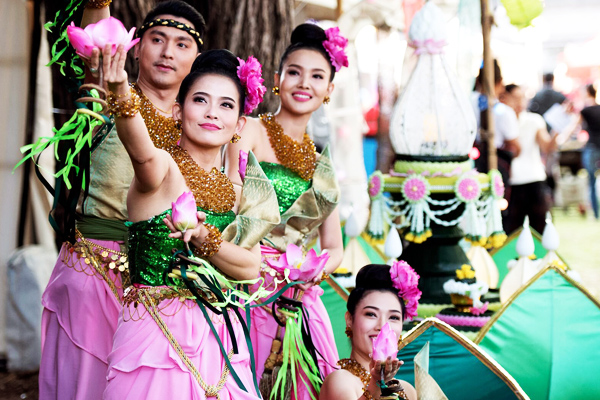 And the festivals that are held have always been a great time to travel in Thailand, from the wet and colorful water festival to the devout festivals of Thailand’s Buddhist people. Festivals in Thailand are celebrated to the extreme, a factor that has always drawn western tourists in to experience the strange and unusual culture that is Thailand.

What kind of festivals do Thais celebrate?

A major Buddhist country, Thailand’s devout population follow Theravada Buddhism, which has been an integral part of the culture and national identity of Thailand. Active participation in the Buddhist religion is the highest in the world, and the religious festivals have always been major events in the Buddhist calendar in Thailand. As such devout Buddhists, the celebrations of major events in the life of Buddha and the saints and gods are important days for the people, and are often named as national holidays to allow all the people to attend. Rich in culture and history, Thailand has a festival in every month of the year, and often several in each month. And with a love of celebrating just about anything, it is small wonder that the Thai festivals, even the devoutly religious ones, are celebrations of intense color and outstanding beauty and revelry.

Top 10 most important festivals in Thailand

With at least one festival in every month of the year, there are more than enough festivals to find a good one to travel to. However, for the sake of simplicity, here is a list of the most popular festivals in the Thai Buddhist calendar.

With a major Chinese population in Bangkok and the rest of Thailand, there is no surprise that the whole country joins in with the traditional Chinese New Year celebrations across the country. Now one of the most popular festivals in Thailand, it normally takes place in January or February, according to the western calendar, and the exact dates depend on the dates of the Chinese calendar. The best celebrations are found in Yaowarat, known as the “Chinatown” of Bangkok, where the traditional dragon dancers parade through the streets and fireworks light up the night sky in the evening. A long weekend of merriment and fun, it is a feast time for lovers of Chinese food, which can be found everywhere. 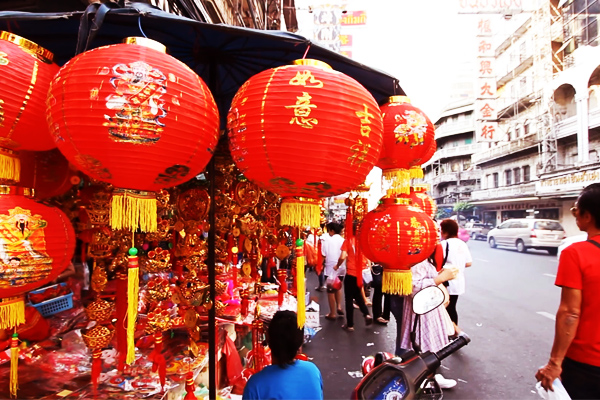 One of the most spectacular festivals in Thailand, the Lantern Festival, known as Yi Peng, takes place in Chiang Mai in Northern Thailand in November. A significant festival for the northern culture of Thailand, the festival is held to release the misfortunes of the past year, and the people release lit Chinese lanterns into the sky in the evening. Thousands gather in every city to release the lanterns into the night sky, and after, live music and firecrackers make the rest of the night a noisy but enjoyable time. 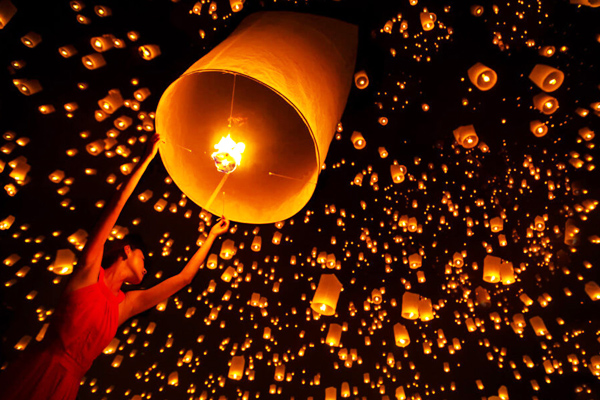 Pronounced “sohng-krahn”, this is the traditional New Year in Thailand, and is celebrated for around three days in April. Thais celebrate the festival by symbolically washing away the sins of family and friends with water, and the festival is a traditional excuse for Thais having fun. Young people lie in wait for other revelers with buckets, water bombs, water pistols, and even fire hoses, ready to douse whoever comes near with copious amounts of water. The people also spend the first day of the New Year visiting the temples to make offerings of food for the monks, clean the images of Buddha, and pour scented water on the statues. 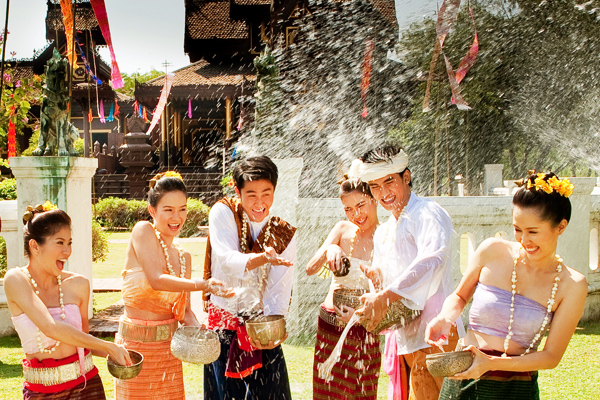 Known as the “Ghost Festival” because of the way the whole event embraces the macabre aspects of the celebration, the Phi Ta Khon is held in the small town of Dan Sai in Isan of Loei Province. A 3-day celebration that is marked by the colorful and gaudy masks and costumes, often with large phalluses as noses, it normally occurs in June or July. Phi Ta Khon is meant to be a huge party that joins the living and the dead in harmony, and locals believe the noise will awaken the spirit of the Mun River, who protects the town from harm. The festival features parades, pageants, and performances on the first two days, with religious ceremonies on the third day. 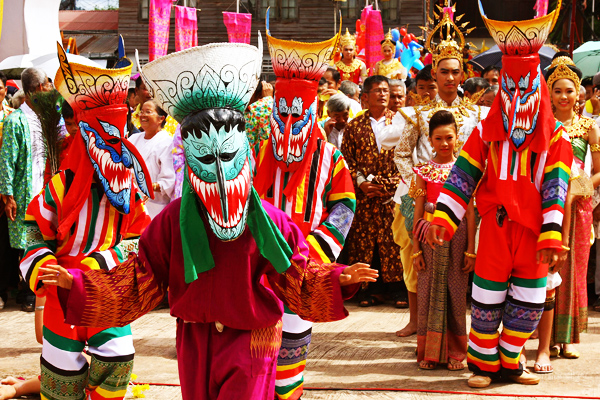 Known as the Rocket Festival, Boon Bang Fai is held in the northern province of Yasothorn in northwest Thailand in the main farming communities. The rockets are meant to encourage their local gods to bless the land with plentiful rains in the growing season, and are paraded around the city before being let off. There is also a contest for the highest rocket, whose owner wins a large sum of money. Those whose rockets fail to launch are dumped in the mud in fun. The celebrations are also marked by live entertainment, merriment, and lots of drinking. 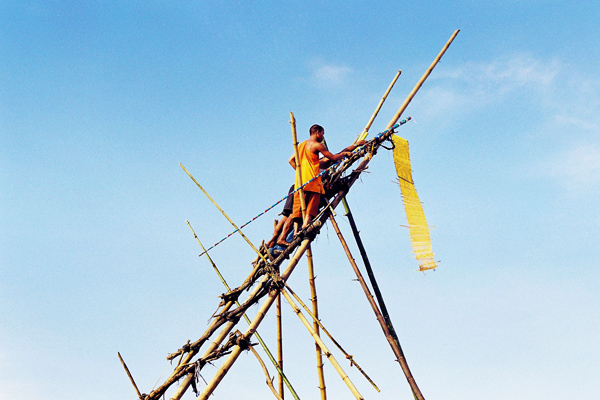 The Elephant Festival in Thailand is held in honor of the giant beasts of burden that are still widely used to move large objects and carry heavy goods. Elephants have been an integral part of Thailand’s culture for thousands of years, and have been traditionally used in battle, agriculture, and for long-distance travel. Held in the northeast province of Surin in Isan, the festival sees a vast parade of elephants that are fed lovingly with fruits and vegetables, and includes marching bands and elephant shows. The festival normally takes place in the last few weeks of November. 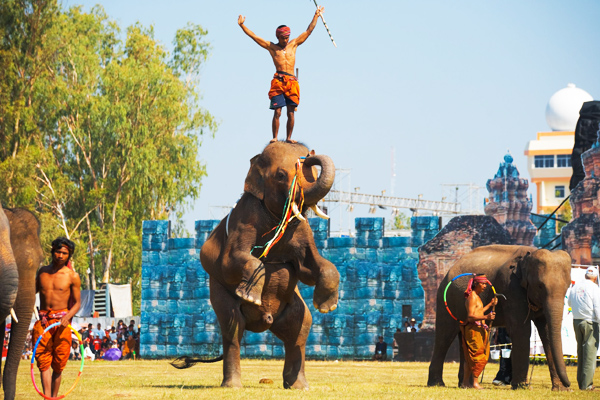 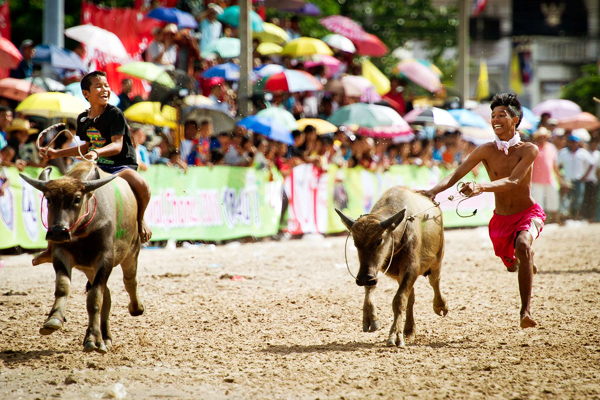 The candle festival in Ubon Ratchathani, in southeast Thailand, is normally held in July on the days of the Asanha Puja, which is the commemoration of Buddha’s first sermon, and Wan Khao Pansa, the beginning of the Buddhist lent. Large wax sculptures are created and paraded through the streets on huge floats, and some are carved with scenes from both Hindu and Buddhist mythology. Normal candles are places around all the temples in the province, in order to dispel gloom on this celebration day, and custom dictates that the people donate clothes to the monks. The huge parades of floats also includes dancing and music, as well as performances of theatrics. 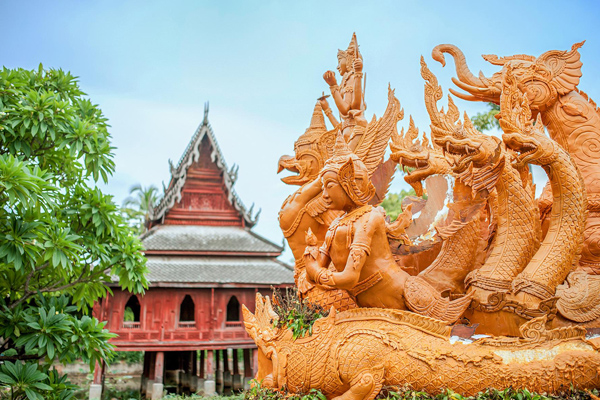 Known as the Naga Fireball Festival, this is one of the many festivals in Thailand that has fascinated western scientists for centuries. The festival takes place alongside the mighty Mekong River in October or November, and the fireballs are thousands of reddish-pink balls of light that rise into the sky at night. The phenomenon is completely natural, and the locals believe it is the work of a serpent known as the Phaya Naga, which is endowed with divine powers. Scientists postulate that the lights are caused by combusting Sulphur in the marshes alongside the river, but this has never been proven. Whether godly or marsh gas, the sight I one of the most amazing to behold in Thailand, or even the world, and the phenomenon continues annually, now often joined by local firecrackers. 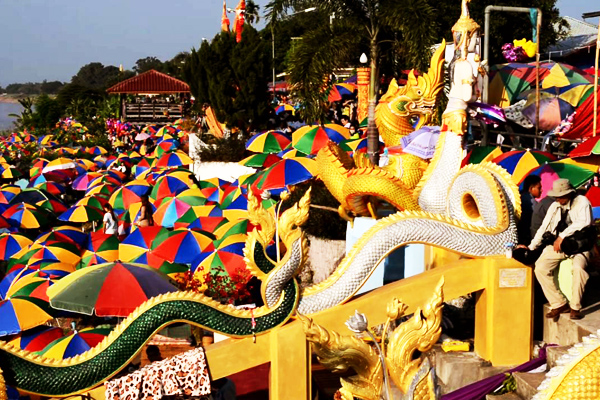 An ancient festival that is held to thank and honor the water spirits for the water they provide the rural areas for the harvest and growing seasons, the Loi Krathong Festival is normally held in November, on the first full moon after the rice harvest. As rice is not always harvested at the same time across Thailand, this festival can occur at different times in different places. The people float colorful banana-leaf lantern boats on the rivers, as a symbolic act of letting go of grudges, anger, and soul defilements, to bring good luck for the coming year. 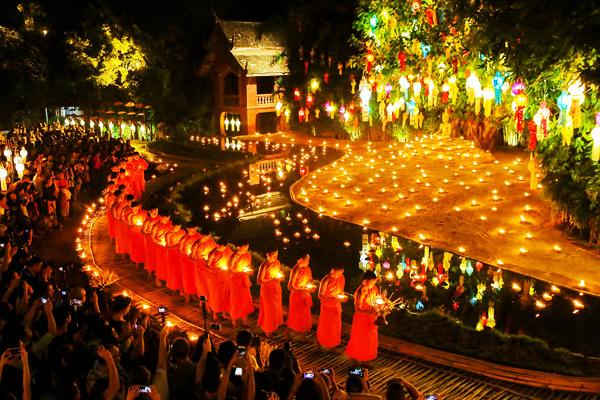 Whether you are coming for the amazing water festival or to see the beauty of the natural fireballs from the Mekong River, there is a festival that will suit every type of traveler in Thailand, from elephants and water buffalo to the ghosts, rockets, and even the Chinese New Year, you are guaranteed to have the time of your life when you visit Thailand for one of its hundreds of annual festivals.