Top Things to Do and Experience for any Cambodia Tour

Since the world saw Angelina Jolie swinging through the ruined temples of Cambodia as Lara Croft, the country has been crawling with tourists eager to get a better look at the places made famous by the film. In recent years, Siem Reap, a town that is close to a huge complex of ancient Buddhist and Hindu temples, is now a major tourist destination, with more than 120 hotels, from basic hostel to Ultra-DeLuxe. While there may be small pockets of opulence such as this, the majority of the country is still poor, and visitors to Cambodia should get out to see the reality of this beautiful country. 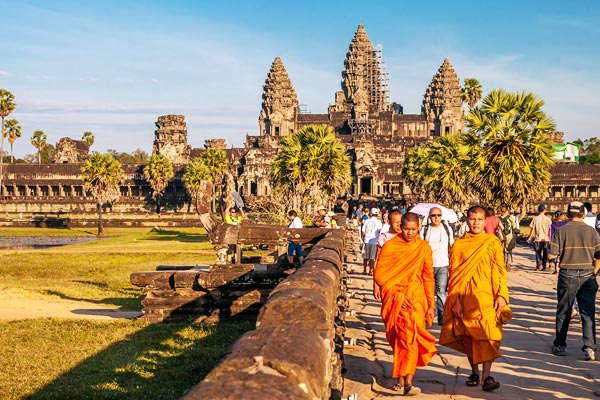 After several decades of civil war, and the genocide brought about by Pol Pot and the Khmer Rouge, Cambodia’s modern, violent history is fresh in the minds of the world. However, with the introduction of a new regime of democracy, the nation sits on the verge of a new revolution – as a popular travel destination. And this is mainly due to the jungle-covered ruins of Angkor Wat, and other places just like it. 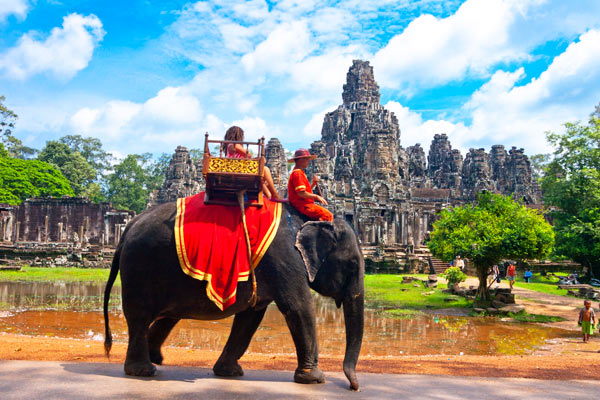 The ancient capital of the old Khmer Empire is also the world’s largest, single religious monument, and is one of only a handful of temples that have been uncovered in the dense jungle landscape. Hundreds of other beautiful, ancient temples and pagodas exist, buried under the growth of tropical jungle, and sometimes used as backdrops for major Hollywood blockbusters. 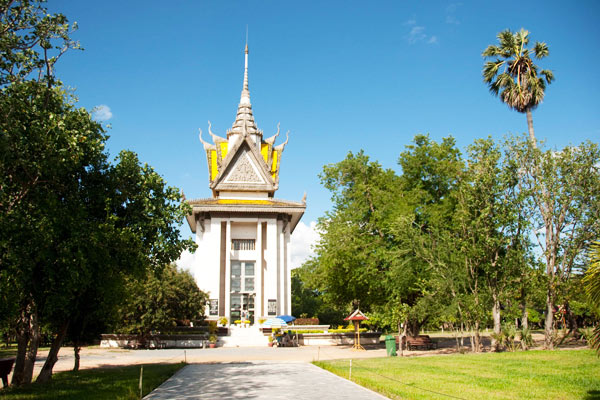 From the ruins of Angkor Wat to the Killing Fields of Choeung Ek, you can really immerse yourself in the rich, yet violent history of Cambodia. Whether you are following in the footsteps of adventurers, or enjoying freshly baked bread in one of the delightful cafes of Siem Reap, it is almost impossible not to be affected by the stories of Cambodia. Tales of glory and of ruin, tragedy and joy, all are etched into the deathly silence of the stones, and shines from the friendly faces of the Khmer people. Wherever you travel in this once-devastated land, Cambodia is a country that leaves an unforgettable, indelible impression.

Top Spots for Tourists in Cambodia

In Siem Reap, lies the ancient temple of Angkor Wat. Probably the most famous of all places in the country, people show up in their thousands to watch the sunrise at 5:30am. While many people crowd the walkways, jostling for the best shot, if you get off the main walkway and sit on the steps of the outpost buildings, you are almost guaranteed a better view, with less people. Built over the course of more than thirty years, Angkor Wat was the 12th century home of King Suryavarman II after he died. 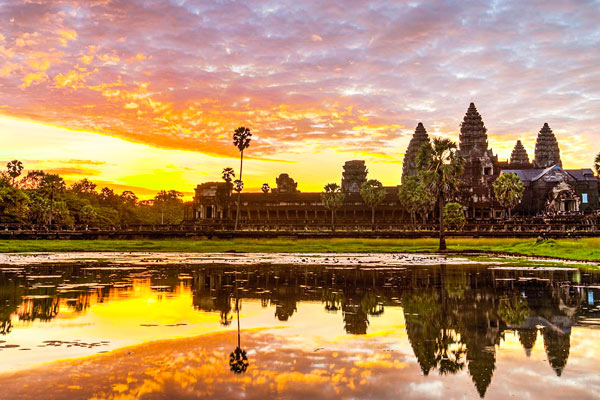 Completely buried by jungle until it was discovered by French colonists in the 1800’s, what they uncovered is now considered as one of the Wonders of the World. The well-preserved temple has numerous bas-relief walls that depict the many levels of heaven and hell, some of which are quite gruesome, as well as more than 1,800 seductive Dancing Maidens carvings.

The temple is surrounded by a huge rectangular lake, and rises up on three terraces to the central shrine and tower. The temple reflects the traditional Khmer design of the “temple mountain” which is a representation of Mount Meru, the home of the gods in Hinduism.

Locally mispronounced as “Uncle Tom”, this temple has not been restored in the way Angkor Wat has, though it has several interesting features. The main feature of the temple is the entrance bridge, which is flanked by 54 stone-carved warriors who appear to be playing a tug-of-war game with the sacred Naga Snake. 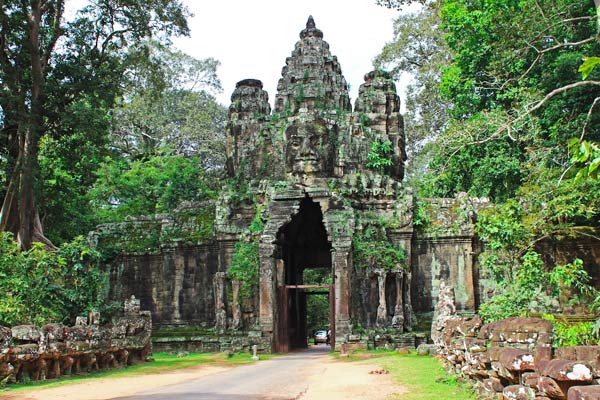 Many of the warriors’ heads are missing, stolen by looters after the war in Vietnam, some of which have been recovered and are now in museums across the U.S. The bas-reliefs here are mainly of people playing chess, cooking, and having babies, and one even depicts two monkeys performing sexual acts, known locally as the “Monkey 69”.

Ta Prohm and the Artisan’s Angkor

The temple that was used in the Tomb Raider film, this ancient place was left completely undisturbed by restoration teams, and is still full of crumbling walls intertwined with thick tree roots. It was left as it was found, to allow tourists to see the state in which many of the temples in the area were discovered. 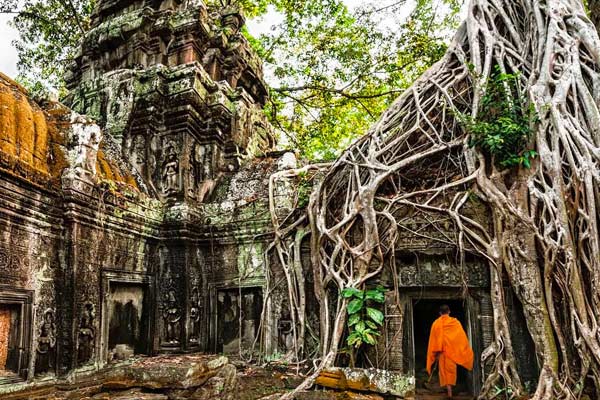 Artisan’s Angkor is a trade school for disadvantaged Cambodians in Siem Reap, where the students make all kinds of local handicrafts, which fly off the shelves of the colorful school store as fast as they can make them. The school makes everything from silver-plated ornamental boxes to vividly colored scarves made of local silk, and it is all of high quality.

This area of Downtown Siem Reap has a nighttime vibe that is comparable to that of New Orleans at Mardi Gras. There are dozens of restaurants selling all kinds of food, both local and foreign, and spas where you can relax, get a massage, or try the traditional Cambodian J’Pong heat and herbal treatment. 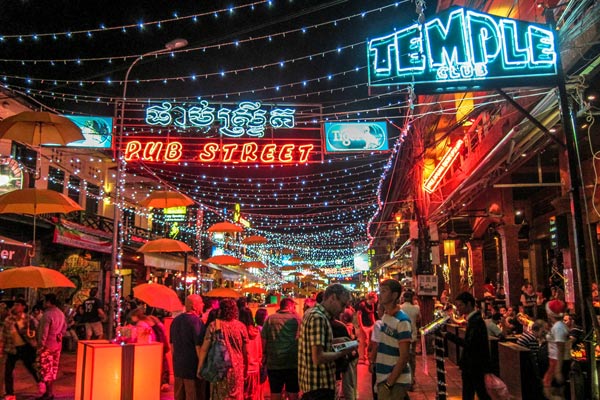 Most of the spas have pools inside where you can get a “fish pedicure”, which can be a little ticklish as the small fish eat the dead skin on your feet. The night market is full of deals on items you can find in many such markets across Asia, but a little searching can be rewarded with some excellent finds.

Tonlé Sap is the largest freshwater lake in Cambodia and South East Asia, and is of major importance to the country. The lake is subject to the changes of the seasons, and shrinks or expands depending on the monsoon rains.

Dry season in Cambodia is from November to May, and the lake drains into the Mekong River at Phnom Penh. In the monsoon season, the lake changes direction, and fills with water to make an enormous lake that is the home to numerous Vietnamese and Cham communities that live in floating villages around the lake.

Formerly the capital of the Khmer Empire from 928 to 944 AD, the site has some spectacular buildings and immense sculptures, and is dominated by the 30-meter-tall temple mountain of Prasat Thom. Rising high above the surrounding jungle, the temple is topped by a giant Garuda (a mythical half-man, half-bird creature). 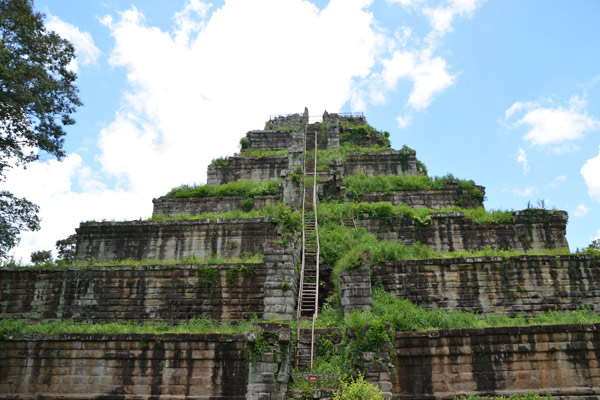 Abandoned and left to the jungle for almost a thousand years, the temple can be likened more to ancient Mayan ruins than typical Khmer architecture, and the encroachment of the jungle and its wildlife on Koh Ker only adds to the site’s sense of mystery.

The largest city in Cambodia, Phnom Penh has been the country’s capital since the French colonial era. Once called the “Pearl of Asia”, it is considered to be one of the prettiest cities in Indo-China, though it is still recovering from wars and revolutions. 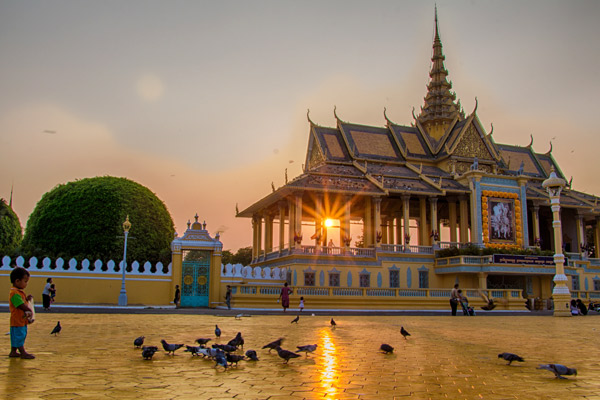 Sitting on the Mekong River, the city dates back to the 15th century, and the French influence can still be seen in the architecture of the city. From the glittering Royal Palace and crowded night markets to the sophisticated restaurants and bars, Phnom Penh’s beauty is complex, and realized slowly by visitors as they tour the city.

15 kilometers from Phnom Penh, the Killing Fields is a monument like no other in the world. The monument is filled with bones and skulls from one of the hundreds of killing fields across the country. The Cambodian government decided to leave majority of these mass graves alone and undisturbed, making this one both a monumental cemetery and a hallowed ground. Nearby is the Tuol Sleng Genocide Museum, which was once a peaceful high school and now is a memorial to those who died there. 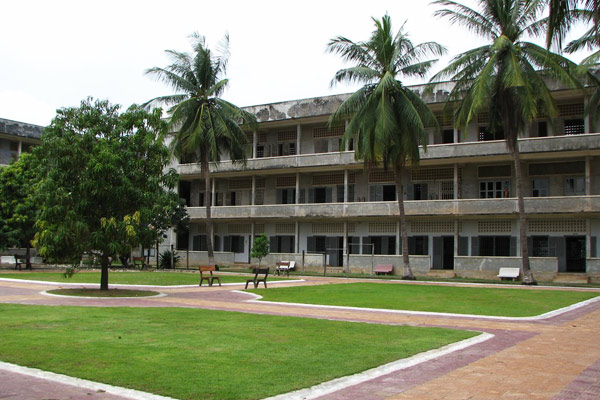 Between 1975 and 1979, the school became a torture and interrogation center for the Khmer Rouge, from which very few survived. Doctors, professors, clergymen, and other high-value professionals were rounded up and chained, electrocuted, dismembered, or beaten to death at the order of Cambodian dictator, Pol Pot. Those who survived the torture were taken out to the Killing Fields, and executed. While it is a hard place to visit, like many other Holocaust Museums, it is there to remind people of the horrors of dictatorship, and make sure it can never happen again.