If you are thinking of traveling to Myanmar next summer, then there are a few places you will not want to miss on your trip. After several decades of being off-limits to tourists following its independence from Great Britain, the former Burma has become one of the most popular destinations in Southeast Asia, with miles of untouched beaches, an abundance of Buddhist temples, and a culture that is as thrilling as it is unique.

Lying in the middle of the country, Inle Lake is the main water source for most of Central Myanmar, and is one of the most popular local attractions for both the beauty of the lake and its indigent culture. The local people that live alongside and on the lake are known as the Intha, and number just 70,000 in total, a small population of what was once the main people of central Burma. 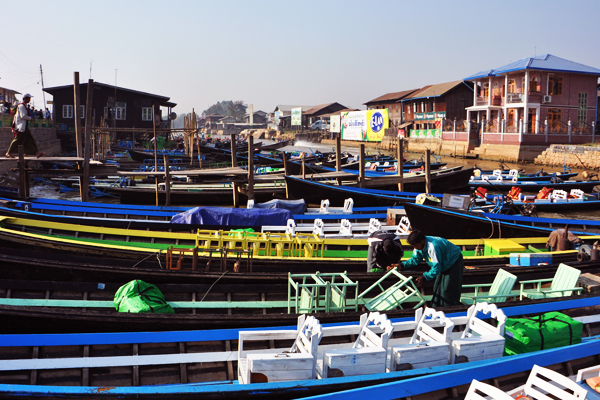 The locals on the lake are one of the most unique small cultures in Asia, and many of them live either in stilted houses on the edge of the lake or in floating villages that stay out on the lake all year round. One of the most popular activities at Inle Lake is the boat ride, which can be booked at Nyaung Shwe, at the northern end of the long lake. The boatmen are all fishermen, who take you out on a tour of the lake in their long, low fishing boats. But the most unusual thing about this trip is the method of rowing the boats that these unique fishermen employ. Instead of using their hands, the fishermen row their boats using one leg around the oar.

Located on the banks of the Irrawaddy River, the temple complex of Bagan is the equal to the Angkor temple complex in Cambodia, without the violent history that is associated with it. One of Myanmar’s main attractions, this area was once the capital of an ancient kingdom that ruled the area more than 1,100 years ago. Occupying an area of around 67 square kilometers (26 square miles), with the river running past its northern and western sides, Bagan is one of the oldest temple complexes in the world, and is in a much better state of repair than any other. 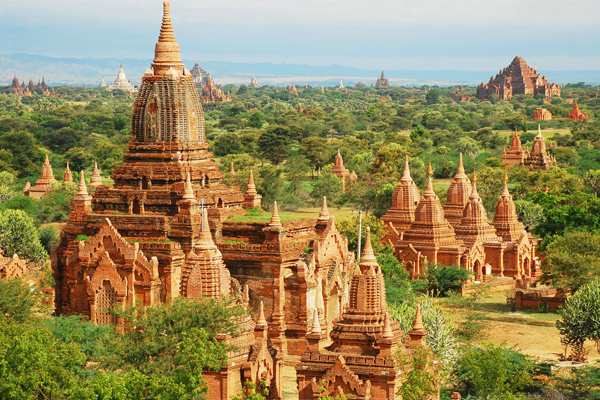 While the area around Bagan has been hit by hundreds of earthquakes over the centuries, it was only the latest, in August 2016, that did the most damage to the temples, with more than 400 temples needing serious repair work. This work is ongoing, but it has not stopped visitors coming to the site, and exploring those temples that are still standing. The biggest difference between Bagan and Angkor is the village in which it sits. While Siem Reap may be a great city for nightlife, Bagan is just an overgrown village with few things to see and no night life at all. The prefect place to come if you are looking for a more relaxing temple experience.

Cross the Goteik Viaduct by train

The highest railway bridge in Myanmar, Goteik Viaduct was constructed in 1899, to link the two British colonial towns of Lashio, the main town in the northern Shan State, and Pyin Oo Lwin, the summer capital of the British colonial administrators of the former Burma. The components for the bridge were made in the United States and shipped to Burma, designed to span one of the highest gorges in the country for a railway line. Lying around 100 kilometers to the northeast of Mandalay, a train ride across the bridge is one of the most popular attractions in the area, crossing a ravine that drops away 102 meters to the ground below. 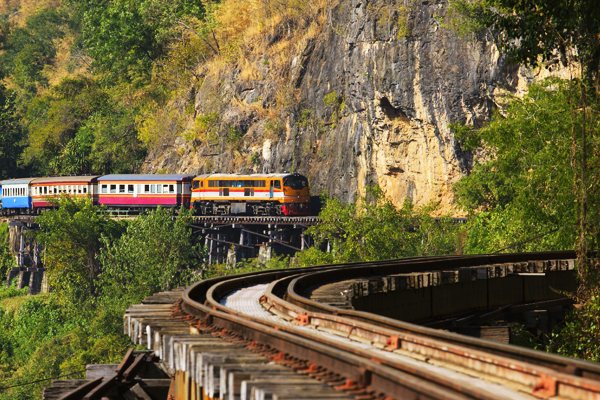 The trains run from the trekking capital of Myanmar, Hsipaw, and take three hours to get to Pyin Oo Lwin, crossing the bridge at full steam in an exciting and heart-racing ride across this old metal structure. While this is a novelty trip for international tourists, for the locals, it is an everyday ride, and the carriages of the train are filled with all kinds of goods, from garden produce and local crafts to baskets of live chickens and the odd tethered goat. Most of the locals travel in the second-class carriages, while the tourists tend to fill the first-class carriages, but if you want that authentic local experience, 2nd-Class is the place to be. Tickets cost three dollars for second-class and five dollars for first-class, and there are only two trains per day, one in each direction.

In the southwest of Myanmar, along the coast of the Andaman Sea, lie hundreds of large and small islands, many of which are perfect for island hopping by boat and scuba diving among the corals and wrecks that dot this storm-swept coast. In the south, the most popular place to visit is Kawthaung, located at the southernmost point of the country, by the border with Thailand. While it is not an island, it is one of the most popular places for tourists and backpackers to use as a base for island hopping around the many islands of the coast, including Hastings Island, Macleod Island, and Lord Loughborough Island. 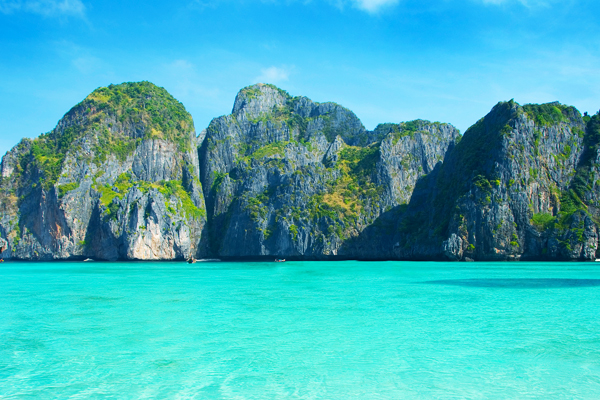 Further north, you come to the small town of Myeik, lying on the delta of the Tanintharyi River, one of the best places to travel to if you are interested in doing some diving in the waters off the coast. A fascinating port town, filled with winding cobbled colonial streets, Myeik is the perfect place to start an adventure island hopping around the vast Myeik Archipelago, where beautiful white-sand beaches adorn every cove and inlet, where tropical reefs abound with an abundance of natural marine life, and where sea gypsies still live in floating villages in the form of the indigenous Moken people of ancient Burma.

The largest city in Burma, and by far the most exciting, Yangon, formerly known as Rangoon, is one of the most exciting cities in Asia, and is an expanding hub of foreign investors, intrepid adventurers, and former political exiles, now returned to their homeland to put things right. No trip to Myanmar could be complete without a tour of the stunning city that is Yangon, with its circular railway and the rash of new restaurants and bars that have opened up to cater to the growing tourist industry that is rediscovering this former Burmese capital. While the capital may have been moved to Naypyidaw in 2005, Rangoon retains its former historical glory as one of Southeast Asia’s most amazing cities. 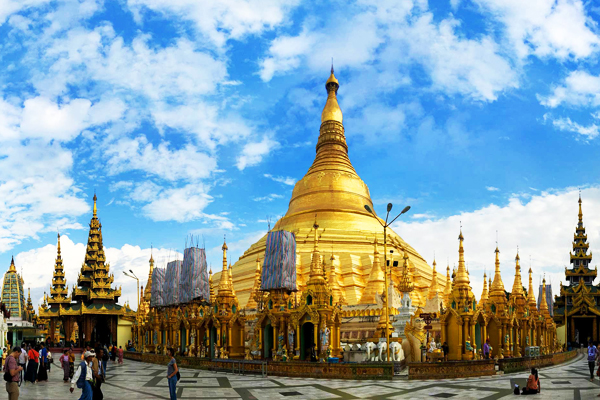 The centerpiece of this unique city, and the most popular tourist attraction within it, is the stunningly beautiful Shwedagon Pagoda, the crowning glory of Rangoon for more than 1,500 years. One of the most sacred Buddhist sites in Burma, standing 325 feet tall, this unique stupa is adorned with more than 27 tons of gold leaf, as well as thousands of diamonds, rubies, and emeralds. It is said that the pagoda was built to enshrine three strands of hair procured from Gautama Buddha, and is believed to contain relics from three other Buddhas as well. The best times to visit the temple are at dawn, when the scene is at its most tranquil, or at sunset, when the last rays of the setting sun turn the golden stupa a flaming orange and crimson.

Myanmar has a number of sacred caves, and the area of Hpa An is the most famous for these unique holy sites. Saddan Cave, in Mon State, is one of the largest sacred caves in Myanmar, and is filled with thousands of images of Buddha, small pagodas, and millions of wall paintings of Buddhist religious figures. The cave is also the home to thousands of bats, though few are seen flying in the daytime. Visit at night, however, and you can see them exiting the top of the cave in a huge black mass of spiraling bodies. 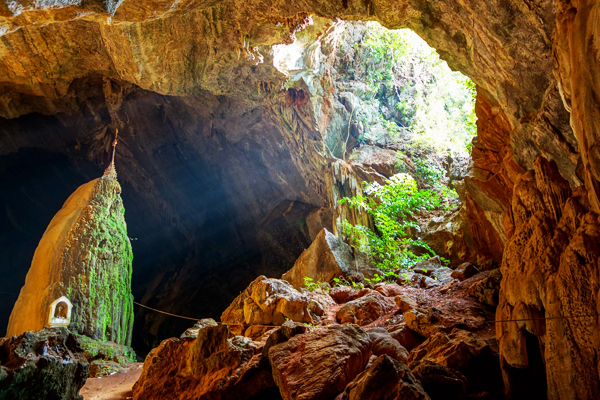 All the caves in Myanmar are considered to be sacred sites, and even tourists are required to remove their shoes before entering, in the same way devout Buddhists remove their shoes when entering a temple. The muddy ground of the cave squelches between your toes as you wander through the caves, which often flood in the rainy season. The exit can be back the way you came, or you can get a boat from the other end to exit through a waterway and back along the river to where you started for a few dollars.

Outside the cave is one of the most unusual pagodas in the world. Perched atop a precarious karst formation that looks extremely top-heavy. The site of a small monastery and temple at the base of the karst formation, the upturned pear-shaped rock towers above the gold-roofed buildings below, with the final pinnacle of the temple built on the top of this stunning natural rock formation.

Check for more information about the highlights of Myanmar tour.