Home > blog > Where Can you Have Sea-side Trip in Cambodia?

Where Can you Have Sea-side Trip in Cambodia?

Situated on the south eastern side of Asia, Cambodia is a very beautiful country. It is situated on the Indochina Peninsula, bordered by Gulf of Thailand to the southwest, Vietnam to the east, Thailand to the northwest and Laos to the Northeast. It has an area of 181,035 square kilometers and a population of 15 million, approximately. The history of the country is marked by much warfare. The Vietnam War is the most ravishing of them that swept off much of country’s beauty and tradition. Yet Cambodia has overcome much of its historical war problem but it has remained, nonetheless, in some areas. Political tensions are still prevalent in some areas. Otherwise in some cases, poverty along with political corruption and political confinement are observed almost blatantly. However, quite ironically the economic growth rate in Cambodia is much higher even though the per capita growth rate is lower. Agriculture is the most important mode of occupation here. The fertile banks of the rivers enable a widespread agricultural growth. Despite all the negative aspects that Cambodia contains, it is a place of wonders for enjoying many sea-side trips. The three major places where tourists can enjoy the sea side tour is provided in details in this article. Moreover with the passage of the famous Mekong River, the place is a sheer epitome of scenic beauty. 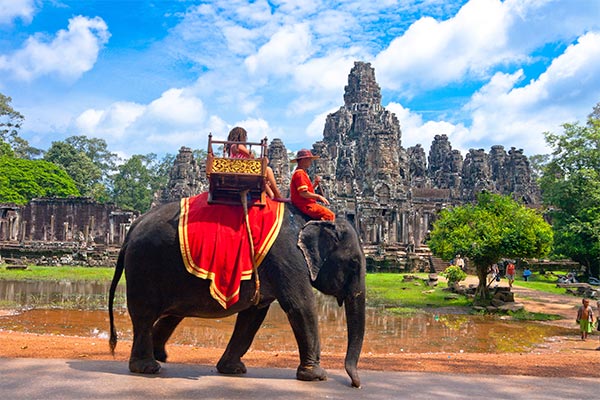 The famous Phnom Bokor or the Bokor hill stations is a place of mesmeric charm in Cambodia. It is a collection of French colonial buildings containing residential buildings, casinos, hotels and others. The Bokor Mountain was actually a hill station resort where the royal family came to relax during summer vacations. After the centuries have passed, it has upgraded itself a lot. The modern time Bokor Mountain has many sightseeing areas around it. The historical value of the place has been preserved and slightly modified rather than being restored. Many lands have also been sold to the business officials that have drawn resentment from the tourists and the local people. However, immediately new roads have been constructed that have provided an immense plus point. Now Bokor Mountain can not only be visited during the Water Festival but all the year round. The places of interest can be many; however you have to travel a great deal in order to visit them all. 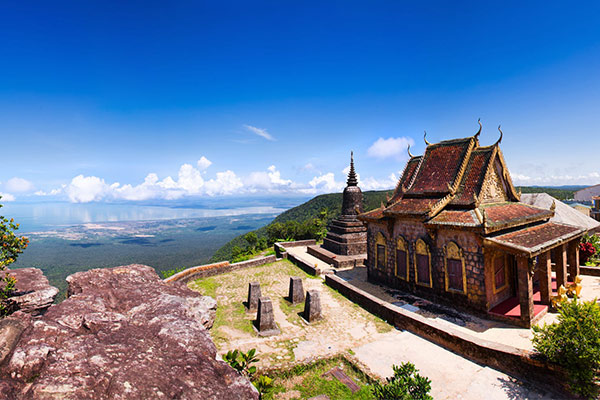 Amongst the historic heritage, there is an old temple, small in size. Other than this, there is a waterfall, known as Popokvil Waterfall, which gets dried up in summer but is filled with water in the rainy season. From the topmost part of the Bokor Mountain, one can have a mesmeric view of the Gulf of Thailand. It is a well cherished serenity that tourists usually look forward to in their journey to Bokor Mountain. There is a circular area at the topmost part of the traffic checkpoint. Towards the right, along with the Popokvil waterfall, you will also get to see a beautiful Japanese farm and the field named One Hundred Rice fields. When you turn left, from this traffic checkpoint, you will eventually come across the so-called haunted Bokor Palace Hotel, the Catholic church and Wat Sampov Pram. The famous Wat Sampov Pram is actually the name given to five rounded rocks that resemble Sampov or boat. They are seemed to be placed between the Buddha Statue and the main wat. There is a compound around this place with a small pagoda in it. The pagoda is usually covered with colourful flags which they treat as their prayer flags. In the compound full of rocks and greenery, the pagoda with the colourful flags, is indeed a spectacular sight. 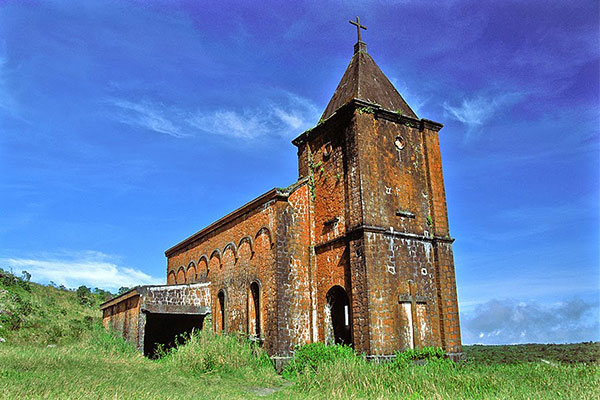 Nearby is located the Catholic Church that has nothing much to view except to enjoy the serenity. The church building however draws attraction. The centuries have had their tolls on the wall of the building because of which it has acquired certain gothic charm. Also there are old tiles that provide certain interest to the archaeologists visiting there. The Bokor Palace Hotel also has the long corridors divulging the history of the building. Except for taking a stroll through the long corridors and rooms, there is not much to do here. You can at the most enjoy the antic charm of the place. 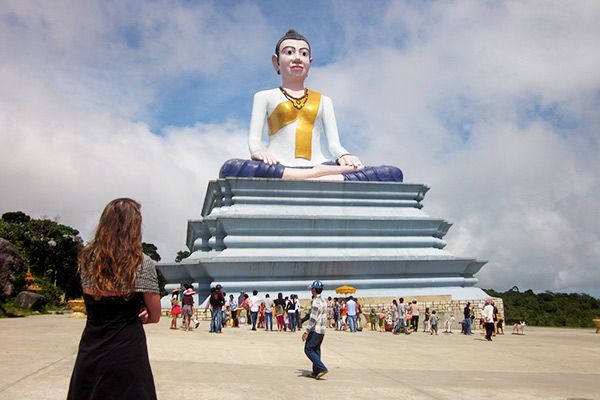 Other than these visual sites in the Bokor Mountain, the place itself is very soothing with its comfortably cool climate and silence and peace. You can hire a taxi for the journey to the Bokor Mountains, which will cost you around 40$. A minivan tour can however cost you 10$ per person. Beware of reckless driving and traitors. They sometime tend to acquire high prices from the tourists. Moreover the Bokor Mountain climate is misty and moist. It is better to carry umbrellas and raincoats for precautions.There is a famous Bokor National Park that contains about 140 hectares of natural forest. Wild animals like tiger, elephants and others are easily found in this dense jungle. This national park also has drawn a lot of attraction.

Kep province is the smallest province in the city of Cambodia with an area of just 336 square kilometers. It is a municipality in original form that has acquired the status of a province. It was the famous beach town of Cambodia, but due to the Khmer rouge, it had lost its glory. The French buildings now have acquired a ruinous state and lost their splendor. However, in some parts, the lost glory of the past is still seemed to be retained. The magnificent view provided b y this region is that of the sea. The sea has been aligned beautifully with hard rocks forming huge sidewalks. There are many large statues that are attractive. There is a royal palace which the king had built, but which has till then remained vacant and unmaintained. The beach is the main attraction of the place. There is a paved road that connects the small town with the town area of Kampot, some 15 km away. The rabbit island or Koh Thonsay is another attraction. It takes at the most one or two hours to visit the island from Kep city. Moreover there are some dark beaches that are covered with mangroves and black rocks, which indeed look beautiful. 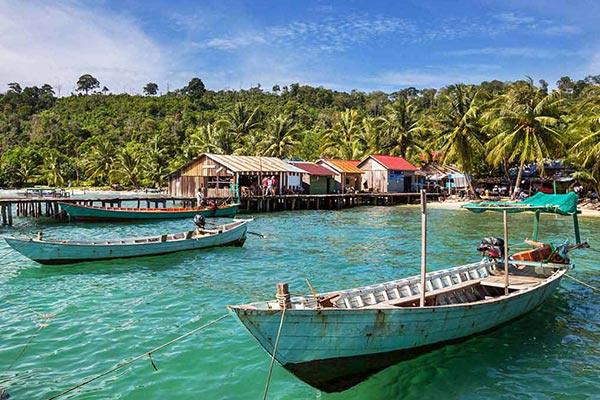 Kep has now acquired the status of a most favourite holiday destination. It was at a time considered to be the place of French renaissance and still in the construction of luxurious French style guesthouses, it proves so. From Kep city, you can visit the famous Phnom Penh and the serene waterfalls of Tuk Chhou. However, except for these little trips, it is mainly a place for total relaxation. Besides the fabulous guesthouses and hotels, you will also be able to enjoy the savoring sea food that this province offers. In a cheap price, they provide plenty. The crab dish is the most famous of them all. You will get the mesmerizing view of the sea, the super comfortable climate, the mountains and greeneries that are homes to millions of birds and animals and also the fabulous foods which are a treat to the tongue. 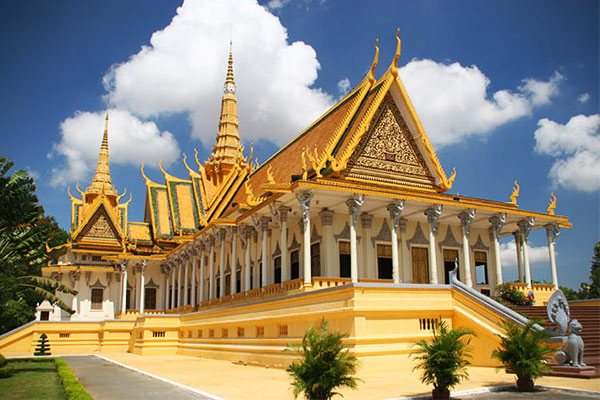 Also known as ‘Kampong som’, Sihanoukville is the coastal city which is also a capital to the Sihanoukville Province. It is located at the Gulf of Thailand, in the elevated tip of the southernmost tip of the peninsular region. The city is a mesmerizing point to spend some of your lives most beautiful days. Overlooking the Gulf of Thailand, it is surrounded by mountains and many smaller islands. The beaches are filled with hut restaurants, bars and some big super cosy resorts. There are rocky as well as sandy beaches. There are many beaches in the city which demand a visit from the tourists. They are namely the Victory beach, Independence beach, Sokha beach which is the private beach but you can gain access by paying some prices in dollars, the Ochheuteal beach and the Otres beach. The Ochheuteal beach is considered to be the most developed beach in the Sihanoukville city. 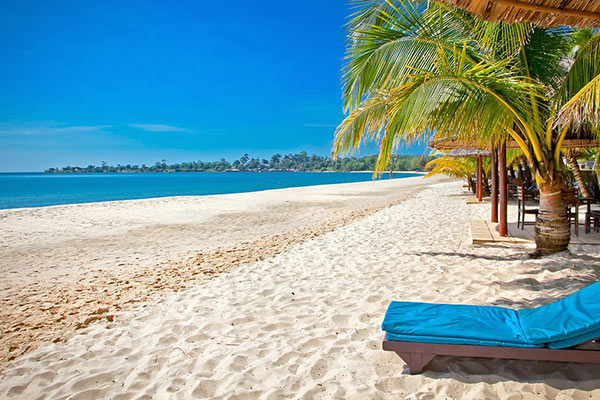 There are innumerable numbers of huts restaurants, resorts, golf courses and other types of modes of relaxations. There are bars from where while taking a drink, you can enjoy the sea. There are provisions of many water sports also. The beach can be reached by road. A taxi usually takes 20 USD. The nightlife in this beach is said to be the best. The whole atmosphere in this beach is very relaxing and leisurely. The Otres Beach is also a famous one, consisting of a 4 kilometer long stretch of sandy beach. The main attractions of this place are the mangroves, the mesmeric view of sunset against the horizon. 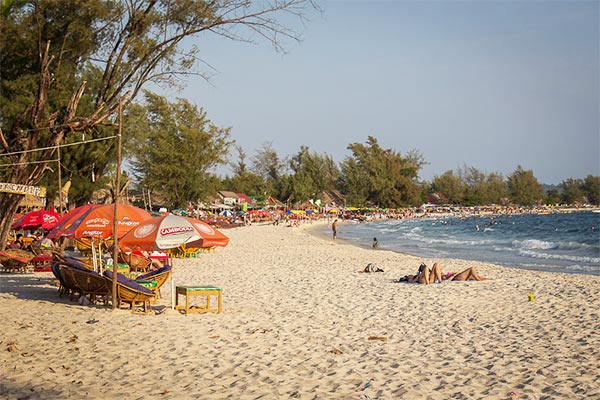 Again there is a small river known as the Ou Trojak Jet river, where people go boating amidst the mangroves. In this beach also you will find several restaurants, huts restaurants and bars for relaxations. You can visit the market that provides a great deal of amusement. Also you can do water surfing, scuba diving, snorkeling, boating and lot of other sports. There is a guesthouse known as Everythang which is a funky one for relaxing with your group. Except for these beaches in Sinoukville, you can visit the Kampong Pier Nup Lok, a famous fishing spot. The Ream National Park, and take a ride to the mini islands that are present.

Except for the beaches, the Sinoukville also provides scopes for spas and massages, golfing, Kayaking and others. Doing these activities also make the vacation a worthy one.