Famous Food in Siem Reap: Must-Eat for a Siem Reap

Siem Reap is the food capital of Cambodia, and is so much more than just the gateway to Angkor. Lying in the north of the country, just above the famous leg-rower’s lake of Tonle Sap, this unique and once idyllic little village has become one of the most popular tourist destinations in Cambodia, and across Indochina. Renowned for its stunning boutique hotels, backpacker hostels, and amazing selection of restaurants, a trip to Siem Reap is a food-lover’s delight.

Siem Reap is one of the top tropical food destinations in Asia, which has attracted a lot of attention with visitors, especially from the west. Well known for its appetizing cuisine and original dishes, many of them originating in the era of the ancient Khmer Empire, this delightful cuisine was long overlooked in favor of its Vietnamese and Thai neighbors. However, not only is the food more unique and original, it is also a lot cheaper than you can find in most places across Southeast Asia, which makes it a foodie’s dream destination.

The single signature dish of Siem Reap, Fish Amok, also known as “amok trei”, is a dish that has survived the thousand or so years since the Khmer Empire with very little adaptation. The most outstanding dish in Khmer cuisine, it is an eye-catching dish in most restaurants in Siem Reap, as it is often served in a coconut shell or wrapped in a banana leaf. This delicious, thick fish curry is traditionally made from catfish or snakehead fish, caught in the Tonle Sap Lake nearby, although some of the local restaurants have pork or chicken versions now too. The key to the unique flavor of the amok is the local blend of herbs and spices, which include garlic, salt, fish sauce, sugar, lemongrass, galangal, chili flakes, and coconut milk. 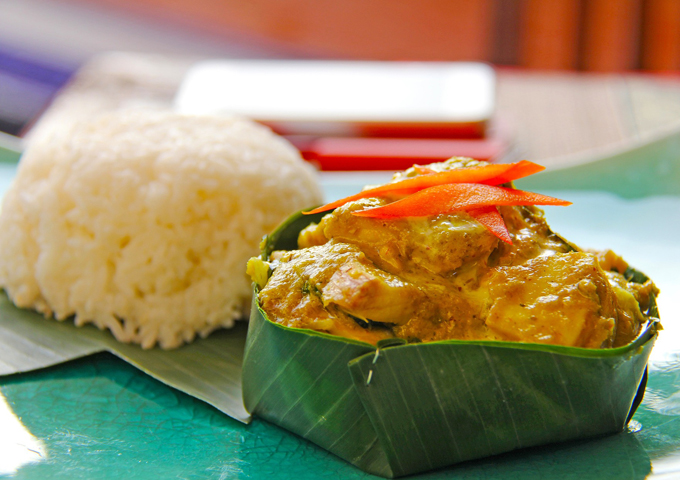 While it is not actually a dish on its own, Prahok is one of the main ingredients in most Khmer cuisine, and actually pre-dates the Khmer Empire, as a way to preserve fish for times of drought when food was scarce. However, it is also eaten by locals as it is, wrapped in banana leaves and grilled as a meal, served with green vegetables and steamed rice. Prahok is actually made from mudfish from the lakes and riverbanks, and is a crushed, salted, and fermented fish paste. The flavor is strong and salty, and a local saying goes, “no Prahok, no salt”, which refers to food without prahok being very bland and uninteresting. 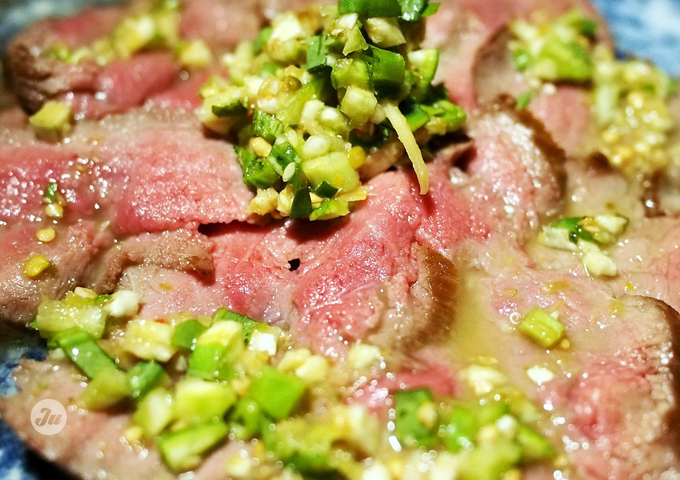 Asia is famous for its huge variety of mangoes, and for most westerners, the only mangoes they know are soft and sweet. This dish uses green mangoes, the hard variety that is found all over Asia, which few westerners have ever eaten. The green mangoes are tart in flavor, the sourness like fresh limes, and the salad consists of shredded green mango, sugar, lemon juice, minced fresh garlic, red bell peppers, hot chili peppers, and a selection of herbs depending on the cook. Seasoned with fish sauce, which is in almost every Khmer dish, and topped with mint leaves, this salad has become so popular that it has recently been found in roadside food stalls all over Siem Reap as a light snack. 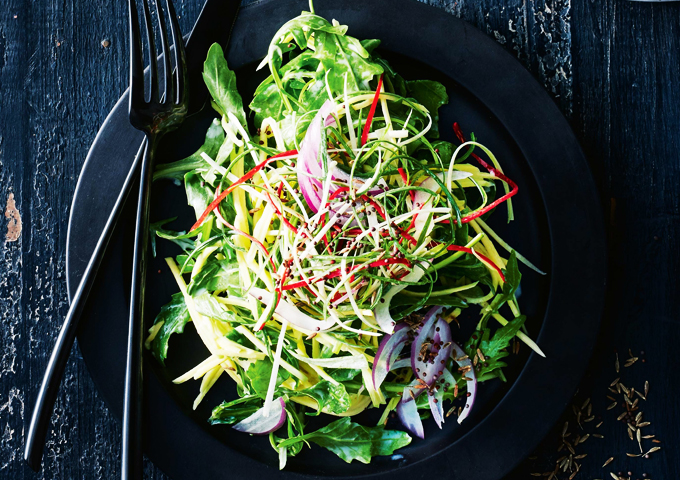 From its humble beginnings as the food of the very poor in Cambodia, fried insects have become one of the most popular street foods in Siem Reap, sold at roadside food vendors all across the city. Originally eaten for the low cost (exactly nothing to pay) and its huge nutritional value, the fried crickets, wasps, spiders, and silkworms have become a haute cuisine dish in some of Siem Reap’s high-end restaurants. There is even a specialist section of the Angkor Night Market that sells the insects these days, and for many foreign visitors to Siem Reap, it is a luxury food. The bugs are seasoned with sugar, salt, chili, and herbs, and deep fried in a large wok, making them crispy and delicious. 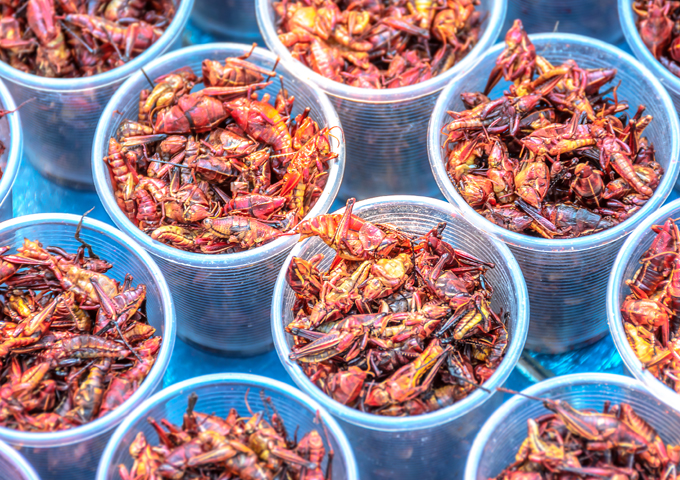 Rice is the staple diet of almost all Asians, and many people see this as a basic part of any Asian meal, often overlooked in favor of the dish it is served with. However, in Siem Reap, there is a version of a rice dish that will soon make you change your mind about rice being bland and boring. Sticky rice can be found all over Southeast Asia, and in Cambodia, the version they have is cooked in a bamboo tube. The smaller grains of rice used are mixed with black beans, sugar, and salt, and stuffed into 30-centimeter-long sections of bamboo, around 3 centimeters in diameter. Coconut milk is then poured into the bamboo tubes, and it is grilled on hot coals for around an hour. The trick to grilling it, is to turn the bamboo frequently, to prevent it from drying up as it cooks. Sweet and sticky, this is the perfect snack to have in the afternoon, for that extra boost of energy when roaming around the temples of Angkor. 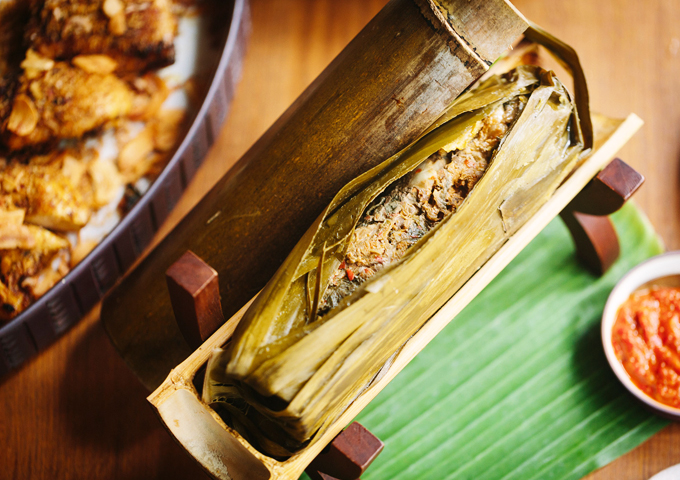 The local name for a popular noodle dish that is served for breakfast all across Cambodia, Nom Banh Chok is one of the most popular noodle dishes in Siem Reap, and is served throughout the day, as breakfast, lunch, and dinner. One of the most loved dishes in northern Cambodia, these traditional Khmer noodles can be found in high-end restaurants and street vendor stalls, and even the local bars as a snack. The main ingredient is the rice noodles, which are served in a bowl with curry sauce, fresh green vegetables, spring onions, banana blossom, and bean sprouts. The noodles are topped with sliced grilled pork, cucumber, and fresh mint leaves. The curry sauce is flavored with kaffir limes, lemongrass, and turmeric root, which gives it the distinctive flavor it is known for in Siem Reap. 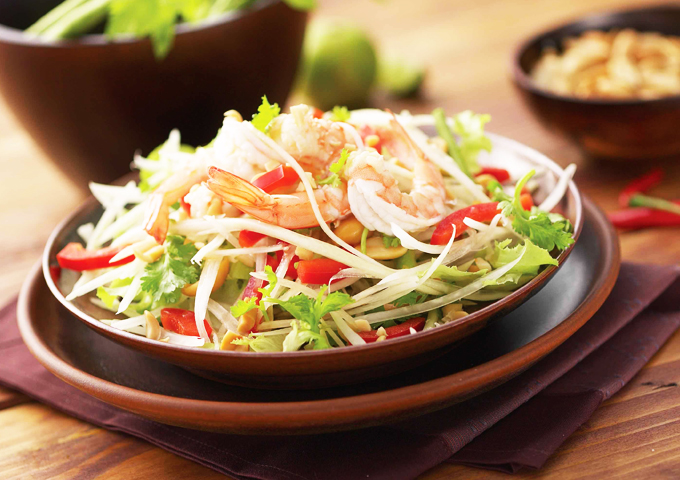 While not necessarily a food born in the Khmer Empire area of Angkor, Cambodian’s all across the country have a love for all things grilled, and barbecue is one of the most popular street foods wherever you go. The difference in Siem Reap is that they use more fish and shellfish than pork or chicken, and prefer duck and beef, or even insects. Cambodian BBQ has a very strong and distinctive flavor because of the use of the herbs and spices that are used to season the food while grilling. It is also grilled on a charcoal burner, using a domed grill plate inside a normal wok. 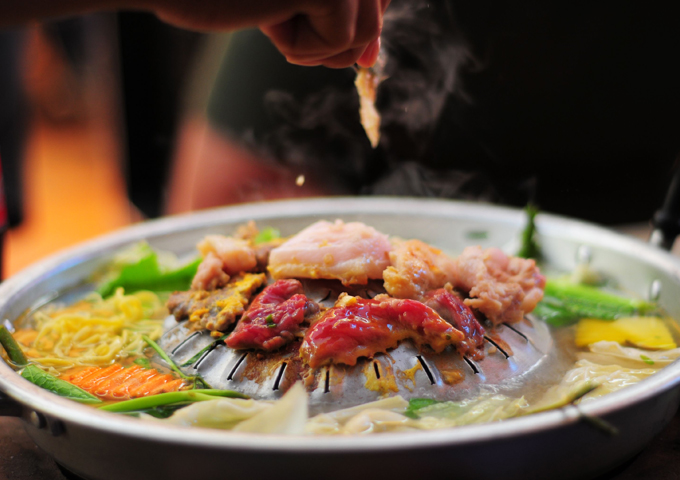 While the popular fried insects can be found throughout Siem Reap, there are very few places where you can find one of the Cambodia’s most unusual dishes. While ants can be found across Asia, in many different countries, only in Siem Reap are these small insects fried in the same dish as fresh beef. The dish is so unusual, it is often one of the must-order dishes for most international tourists that have already experienced eating ants in Asia. The ants are fried in a wok with butter, lemongrass, ginger, garlic, and thinly sliced shallots, and the beef is added once the ants and garlic start to crisp. The dish is made a little sour, thanks to the addition of the ants, and is served topped with pepper and herbs to taste. 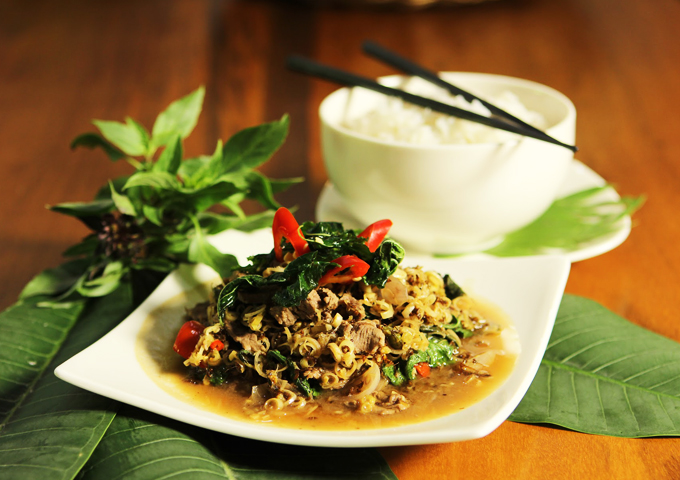 After having spent every day eating the famously spicy food of Cambodia, a sweet dish that is not a dessert is a refreshing change. A specialty of Siem Reap that was developed during the French colonial era, Jaggery Sweet Soup is the ideal balance to all the spicy dishes of the city. The soup is made from concentrated dates, cane juice, or palm sap, and the color varies from light to dark brown, depending on which is used. The concentrated mix is a good source of iron and mineral salts, which are not found in normal white or brown sugars, and has a sweet taste that is more like syrup than sugar. The soup is made using diced potatoes and green beans, which perfectly complement the sweetness of the dish, and it is a good source of energy replenishment after a long day touring the temples of Angkor. 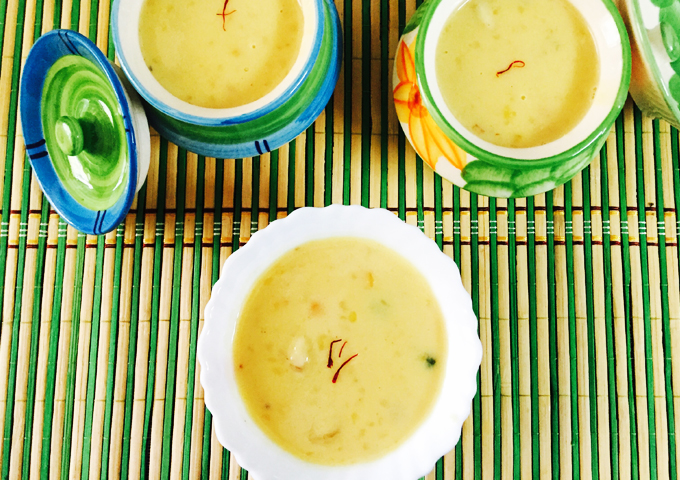 There is never enough time to try every dish you will find in Cambodia, or even just in Siem Reap, and there are thousands more to choose from, though you will have to look long and hard to find some of the local dishes in cafes and street vendor stalls. Food vendors tend to sell the most popular dishes for the foreign tourist market, and dishes such as bobor, the local version of congee, or Kuy Teav, a noodle soup with green vegetables, are often only found in local cafes and eateries that are found in the small backstreets and local eateries. There are many places that you can try that are off the beaten tourist track in Siem Reap, and if you want the best in authentic local cuisine, then these are the places you want to search out. Talk to the local tuk-tuk drivers, and they will show you where to find the best in local eateries, for a small fee and their services to take you there.

How to Get from Phnom Penh Airport to Siem Reap
Siem Reap - Sunrise at Angkor Wat Tour
Famous Food in Siem Reap: Must-Eat for a Siem Reap 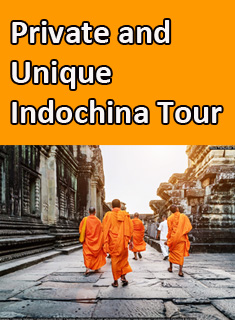 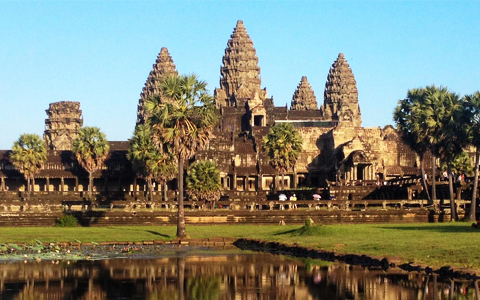 How to Get from Phnom Penh Airport to Siem Reap