Best Places to Visit in Thailand Cambodia and Vietnam 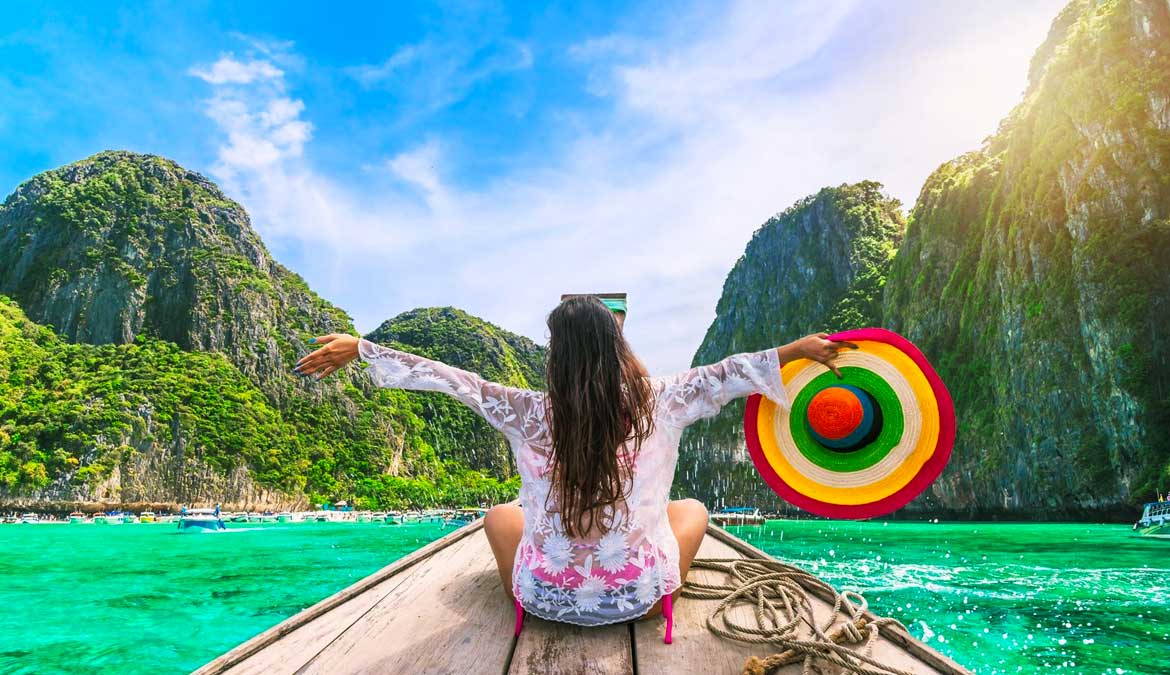 Lying in the former region known as French Indochina, Thailand, Cambodia, and Vietnam were all once a part of the ancient Khmer Empire, which stretched across most of Indochina, covering major parts of Vietnam and Thailand, as well as all of Cambodia and Laos. Popular with travelers to the region, Thailand is one of the most visited countries from the west, with millions of western travelers making the trip to Bangkok and Chiang Mai every year.

Similarly, Cambodia and Vietnam are also major tourist destinations now, becoming popular over the last decade as vacation destinations that are cheap, yet worthwhile to visit for most western tourists. Covering all three locations in one trip, of around two weeks, is possible, as long as you plan your tour itinerary carefully to give you the best options for visiting all three countries amazing attractions.

>Check for the most popular Vietnam Cambodia Thailand tour itineraries.

Best Places to Visit in Thailand

Chiang Mai, in northern Thailand, is one of the most popular destinations in the kingdom for tourists, and this flourishing city is often a base for backpackers and trekkers who want to explore the lush northern hilly landscapes on foot. Surrounded by the mountains of northern Thailand, the area is home to more than a dozen different hill tribes that live in the north, most of whom still live in the traditional ways of their ancient ancestors. The city itself is a large and culturally important place, with modern architecture sitting next to ancient Siamese buildings and temples, coexisting peacefully and seamlessly together.

No visit to Thailand  could possibly be complete without a visit to the capital city, Bangkok. The largest city in the country, this buzzing metropolis is an astonishing sight, with its high-rise buildings and ancient temples sitting side by side with sumptuous royal palaces, exotic and erotic nightclubs, and bustling night markets with vendors shouting their wares at the top of their voices. While it may appear to be a concrete jungle on the outside, delve a little deeper and you will find the ancient canals and green parks, filled with flowering tropical plants, the natural beauty of the city, hidden away behind back streets and alleys. 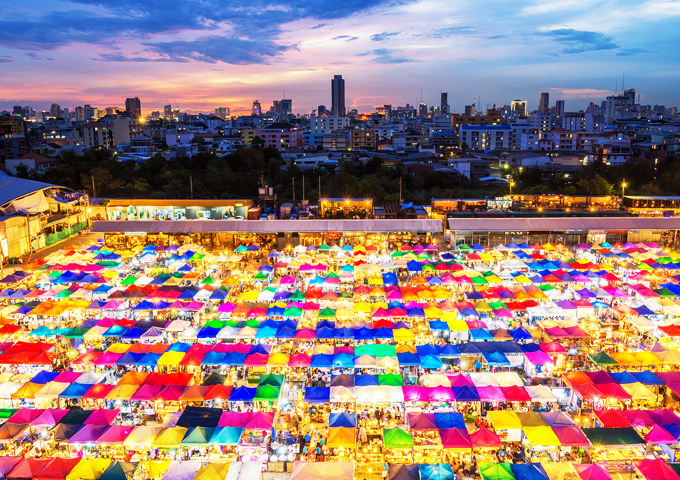 Ayuthaya, in the Chao Phraya River valley was once the capital of ancient Siam, pronounced so by the Ayuthaya King, U Thong. Founded in 1350, the city sits on an island that is surrounded by the confluence of three rivers that connected the city to the Gulf of Thailand. The city was once declared to be the most magnificent city on the planet, with three vast palaces, over 450 Buddhist temples, and a population of more than a million souls. After it was attacked and conquered in 1767 by the Burmese, the capital was moved to Bangkok, and all that is now left are ruins, which have become a popular tourist attraction in Thailand.

Best Places to Visit in Cambodia

Undoubtedly, the first place anyone visiting Cambodia is going to want to go to is the stunning Angkor Archaeological Park in northern Cambodia, a stone’s throw from the city of Siem Reap (how to plan a Siem Reap tour). Built between the ninth and fourteenth centuries by the Khmer Kings, as part of the ancient Khmer Imperial Capital, Angkor is a huge site with more than 2,000 temples, though most of them are in ruins and still buried in the northern Cambodian jungles. The most famous of all the temples is that of Angkor Wat, the main temple of the Khmer King, Suryavarman II, built in the late 12th century and the site of his burial on the occasion of his death in battle against the Champa people. Dedicated to the god Vishnu, the temple is the largest single religious monument in the world, and the iconic symbol of Cambodia today. 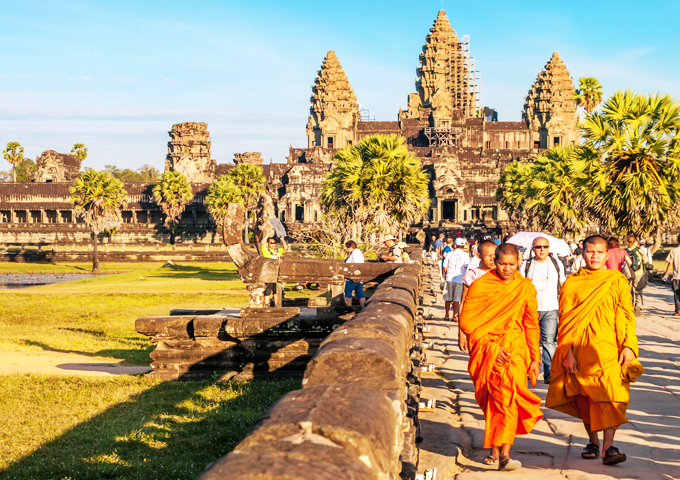 The capital of Cambodia since the days of the French colonial era, Phnom Penh was once lauded as the “Pearl of the orient”, for its stunning beauty and spectacular architecture. As one of the “prettiest” cities in Asia, majority of the older city was rebuilt by the French, and that colonial architecture remains to this day, influencing the modern architectural designs of the city. Located in the south of Cambodia, on the banks of the mighty Mekong River, the site has been a city in Cambodia since the 15th century, not long after the fall of the Khmer Empire.

Best Places to Visit in Vietnam

The first place to visit for anyone traveling to Vietnam should always be Halong Bay, and its stunning small islands and unique limestone karst formations. With its stunning aqua-green waters and the naturally sculpted rock formations rising from the sea like dragons rising from the depths, this stunning location is he most popular destination in Vietnam, and at just 130 miles southeast of Hanoi, is easy to get to. More than 2,000 small jungle-encrusted islands fill the bay, pitted with various grottoes, caves, sinkholes, and small lakes and lagoons. 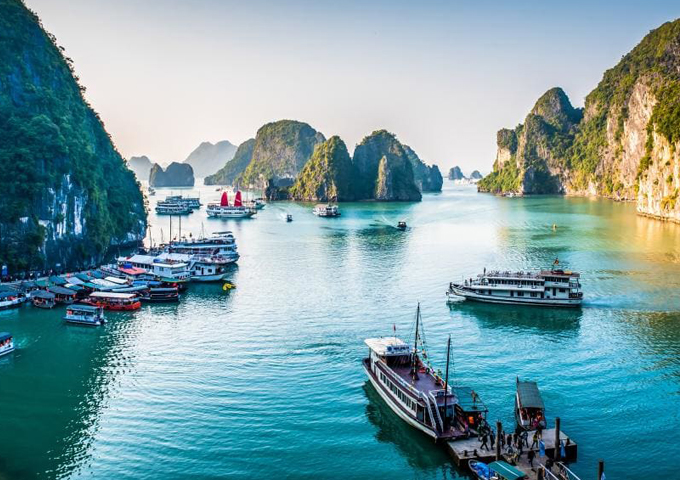 Within the past century, Hanoi has survived the Indochinese and Vietnam wars to emerge as the stunning capital of Vietnam, reunified after a long period of separation. The heart of this French colonial-inspired capital is the Old Quarter, with its unique blend of French and Asian architecture and cultures. Despite constant bombings during the Vietnam War, most of the old French buildings survived, and can still be seen in the Old Quarter, lying along tree-lined boulevards and cobbled streets. The busy markets, quaint coffee shops, and delightful cobbled streets make Hanoi a unique destination in Vietnam, and one of the most popular tourist sites in the country.

Dating back more than 2,000 years, the ancient city of Hoi An was once the capital of Vietnam during its Imperial Period and the Champa Kingdom. A city filled with historical architecture and traditional culture, Hoi An is one of the most stunning examples of the melding of old and new in Vietnam. Ancient Champa buildings and temples lie next to French colonial houses, now mostly boutique hotels to cater for the tourists. Surrounded by the modern aspects of he city, with modern buildings of steel and glass, the Old Town is small enough to easily walk around and its narrow winding lanes are filled with beautiful old houses and hundreds of small shops where you can buy authentic Vietnamese handicrafts as souvenirs.

If you are planning a two-week trip to Thailand, Cambodia, and Vietnam, then your trip should really start in Thailand, with the Thai capital of Bangkok. The city is stunning, and really requires at least three days to explore. From there, a trip to either Pattaya or Phuket will give you the chance to explore Thailand’s gorgeous coastal regions for a couple of days, before heading to Chiang Mai in the north. Chiang Mai is the cultural capital of Thailand, and deserves a two day visit at least.

With flights to Cambodia being so cheap (some around 50 dollars), traveling from Chiang Mai to Siem reap and Angkor is a short and simple trip, which would give you several days to spend exploring the temple complex and the city. From Angkor and Siem Reap, travel south to Phnom Penh, the Cambodian capital for a couple of days exploring the rising Pearl of the Orient, before taking the boat ride across the border along the Mekong River to Saigon, now known as Ho Chi Minh City, in Vietnam.

After a day exploring Saigon, take the flight to Da Nang to explore the cities of Hue and Hoi An, both ancient cities that date back to the Champa kingdoms more than two thousand years ago. Then travel north to Hanoi, the capital of the reunified Vietnam, and spend a day or two exploring the old French colonial architecture and streets, before heading to the stunning location of Halong Bay. This awesome water world deserves several days to explore, and he best way to do so is by boat. Boat cruises around the islands range from half day tours to 2-3 days on the boat, cruising between the islands and spending your time swimming in the stunning green waters and exploring the multitude of caves and grottoes that cover the islands.

Thailand, Cambodia, and Vietnam are three of the countries that are must-visit destinations in Asia, and while a shorter tour could be done, it would not cover as much of the three kingdoms as you could if you had at least two weeks to spare traveling through Indochina. None of the sites there can really be condensed much, as they all have such long and varied histories, and you should give them their due, and explore them with plenty of time to spend on your trip.

More Articles about Thailand and Vietnam and Cambodia Tour Guide

Most Popular Thailand and Vietnam and Cambodia Tour Packages