7 Facts about Elephants in Thailand 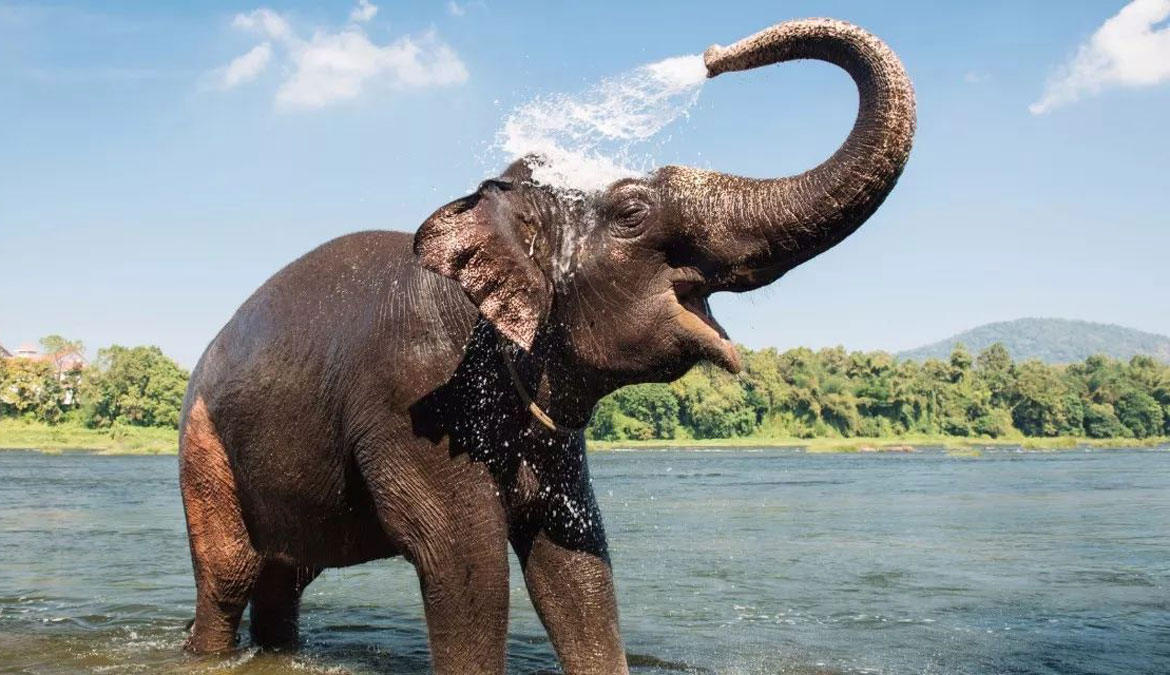 Visiting Thailand gives perhaps your first opportunity to touch, ride and play with elephants. However, you might be unaware of what treatment those elephants have received in Thailand’s tourism and other industries. There are some facts about elephants in Thailand that you should know before you have a Thailand elephant tour.

1. Elephant is the National Animal of Thailand

Officially, elephant is the national animal of Thailand. Elephants have a significant influence on Thai culture.

Thailand is a majority Buddhist country and Thai elephant is portrayed as a Buddhist symbol. When getting around Thailand, you can find plentiful drawings of elephants decorate the walls of most temples. White elephants are used in royal events of ceremony, all dressed in colorful costumes. Due to their association with the Thai royals, white elephants in Thailand is a symbol of wealth and power. 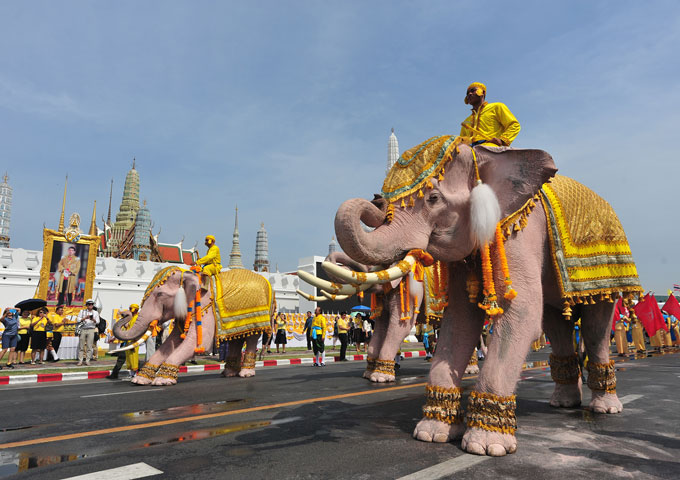 White elephants in Thailand is a symbol of wealth and power.

Elephants can also be found on many provincial seals.

2. Elephants in Thailand were once Used in Wars

The status of Thai elephants has not changed their heavy workload in some industries in Thailand. For hundreds of years, elephants in Thailand have shared a close working relationship with Thai people.

3. Elephants in Thailand once Worked in Logging Industry

The elephants in Thailand also worked in logging industry. They were captured and trained to be faithful laborers to loggers. Their big size and strength make them capable of a large amount of log transportation. 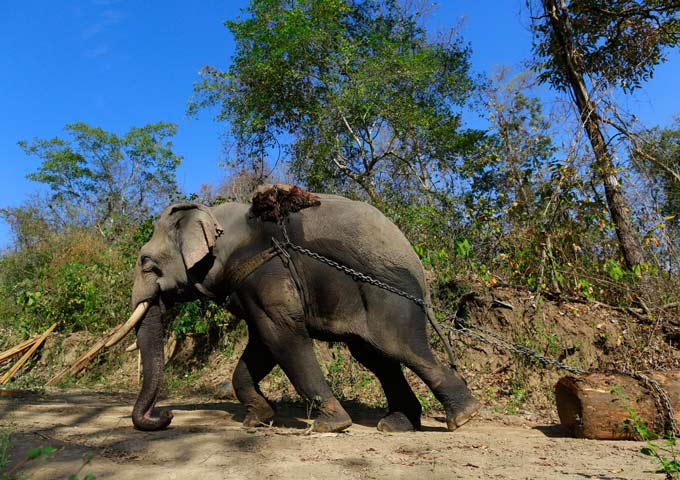 Sadly to know that these elephants would be captured to start the training at an early age of 3-5. With the help of mahouts, they would learn the skills to stop, walk, crouch, pick up, move, lift, pull and push. They would use their tusks and trunks, together with chains, to move the logs.

These elephants have done heavy work in Thailand logging industry until 1989. More and more massive landslides and mudflows led the government to ban logging in Thailand. Since then, almost 70% of captive elephants lost their jobs.

4. Most Elephants in Thailand are Mistreated in its Tourism

The bankruptcy of Thai logging industry led both elephants and their trainers to lose their jobs. They then gradually turned to tourism industry. With the surge of Thailand tourism, elephant tours became a trend. However, few people see the dark side of elephant tourism.

The elephants in Thailand tourism receive similar cruel training left from the old days. Mahouts train them to be rideable for tourists, which is actually harmful to the elephants. Their spines are not made to support the weight of humans. They also are trained to learn tricks like painting to entertain tourists. 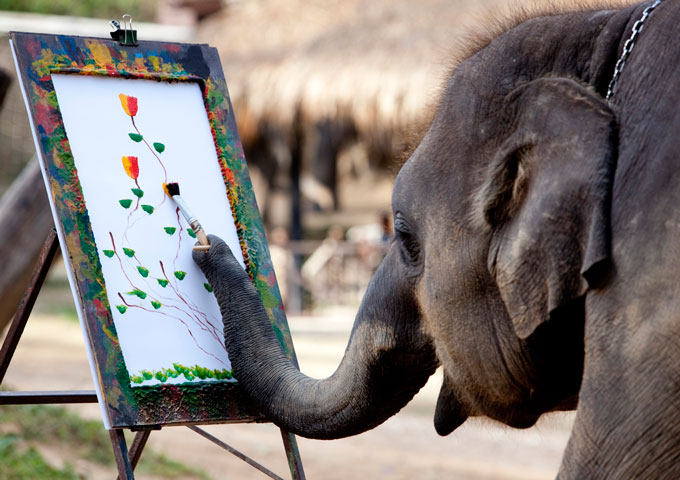 Thai elephants were trained to paint to entertain tourists.

Wild elephants won’t entertain humans or let humans ride them. Usually, in order to tame the wild elephants, mahouts usually start to train them when they are still babies. Separate the baby elephants from their mothers and force them to learn working skills.

The biggest tragedy of elephants working in the logging industry mentioned earlier is that the numbers of Thai elephants decline sharply. In the early 1900s, there are around 100,000 Asian elephants living in Thailand.

Today, the numbers of Thai elephants drop to an estimated 3,000-4,000. About half of this number is domesticated, the remainder living wild in Thailand’s National Parks Reserves. There are more threats to elephants.

The urban expansion makes elephants’ habitat loss, which is another reason that endangers elephants. Besides, elephants are in demand for work in tourism so that many people capture them from the wild. Some poachers even brutally hunt and kill elephants to get the ivories.

6. Increasing Sanctuaries are Built to Provide Havens for Elephants in Thailand

Habitat loss, poaching, and heavy work have reduced the population of elephants in Thailand. Luckily, a growing number of people come to realize the urgency of elephant protection. There are more and more sanctuaries and retirement homes for elephants built in Thailand.

Seating in the rainforest of Chiang Mai, Elephant Nature Park is one of the best places to visit elephants in Thailand, founded in 1995. You have the opportunity to work as a volunteer to help prepare food for elephants, take them to rivers and wash them. Over 75 elephants saved from tourism or logging industry live and roam here. 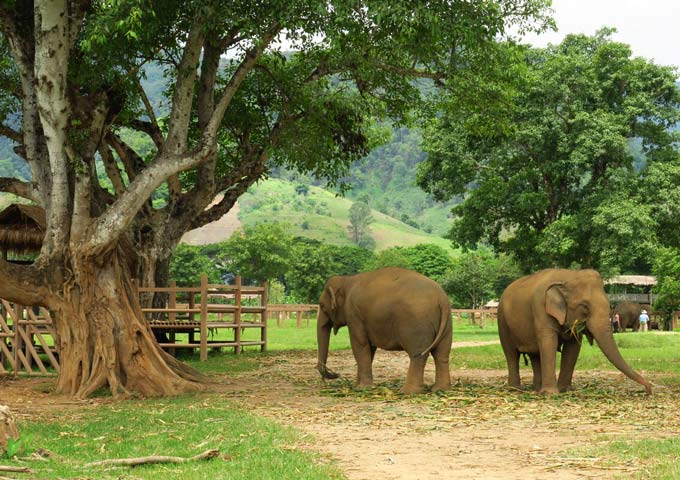 There are over 75 elephants living in Chiang Mai Nature Park.

As the name suggests, Friends of the Asian Elephant Hospital is a special hospital for elephants, located in Mae Yao National Reserve of Lampang. Visitors are welcomed to see how the animal doctors treat the injured and disabled elephants. You can volunteer to clean the living places of the animals.

Keeping so many elephants is expensive and these camp founders are trying their best to maintain the homes for elephants. For example, cat cafe, Thai cooking class, weaving club, glamping, etc., are set to attract visitors to come.

7. There is a National Elephant Day in Thailand

Over the thousands of years, elephants in Thailand have always been an important role in its battle, labor and transportation. To show elephant’s significant meaning and culture influence to Thailand, and promote people’s awareness about elephant protection, the 13th of March is declared to be the National Elephant Day in Thailand, also called Chang Thai Day.

In Chiang Mai where most elephants in Thailand are settled, many interesting activities are organized on the celebrating day, including buffet luncheons for elephants, a traditional blessing ceremony and a special elephant show. You can add them to the plan of your northern Thailand tour.

Now you've already know the facts about Thailand elephants and see their long-sufferings. Tourists' demand for riding elephants in Thailand is one of the reasons that make more baby elephants separated from their mothers, mistreated, and forced to entertain people.

During your next tours in Thailand, please choose a responsible and ethical elephant sanctuary to travel to. Stop riding, and protect them instead!