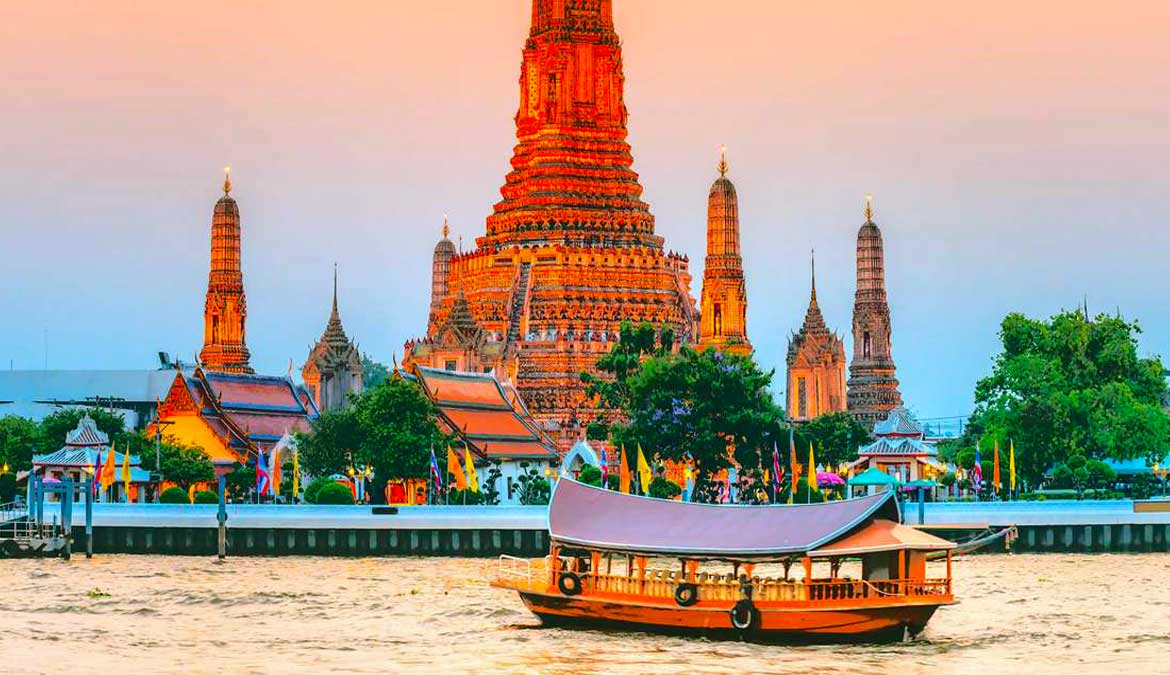 Thailand is one of the most popular destinations in Southeast Asia for tourists from around the world, and has been named as the top tourist destination for European tourists for 2017. A country of varying climates and weather systems, travel to Thailand can actually be done throughout the year, if you choose your destinations carefully. And with many wonderful cities to visit across the country, not just the stunning beaches, there are opportunities to learn more about the local Thai culture, explore narrow alleys and canals in the back-streets of several cities, and find the most remote and authentic cities in the country for your amazing Thailand tour. 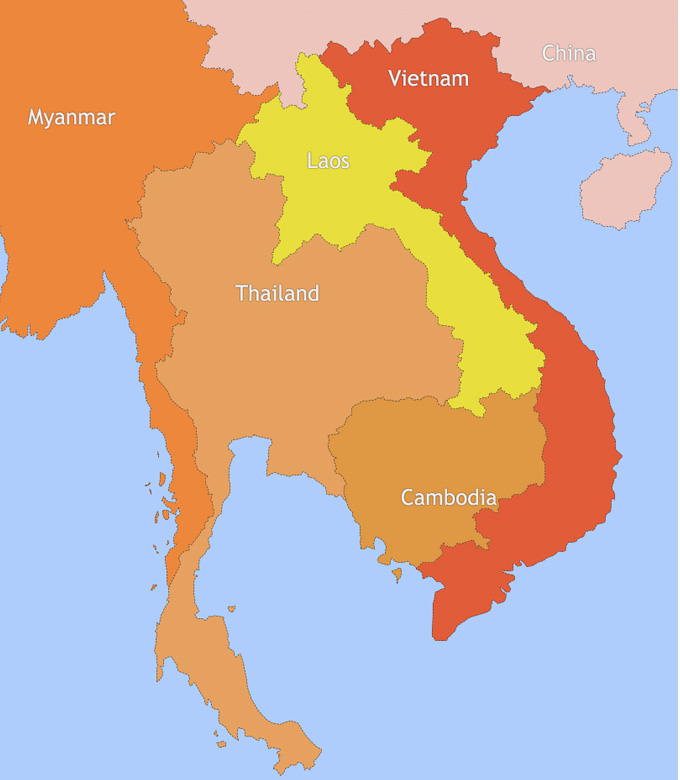 Thailand is not just a country of varying climates, it also has a variety of landscapes, from the mountainous north to the plains of central Thailand and the narrow isthmus of the south, with its small ridge of mountains. The country also has more than 1,400 small islands off its coastline, which lies in both the Gulf of Thailand and the Andaman Sea.

Extending from the 20th parallel in the north to as far down as the 5th parallel in the south, Thailand stretches from just below the Tropic of Cancer in the north to slightly above the Equator, covering around 15 degrees of latitude from north to south. With Myanmar to the west and northwest, Laos to the northeast, east, and southeast, and the Gulf of Thailand to the south, with Malaysia along the southernmost border of the isthmus, Thailand borders only three countries, and has one of the longest coastlines in Southeast Asia, with the most beaches.

One of the most popular cities to visit in Thailand, The national capital of Bangkok is one of the most remarkable cities in the world. Skyscrapers dominate the skyline and stunning local markets can be found throughout the city, while sparkling gilded Buddhist temples can be found on every street corner and the ancient buildings lie side by side with modern architecture. On top of the beauty of the city, Bangkok has the most sumptuous and buzzing nightlife in the world, and the unique Thai cuisine in Bangkok is available in thousands of restaurants.

Containing more than 300 temples, Chiang Mai, the “northern capital”, is one of the coolest places to visit in Thailand, A charming and laid back city, Chiang Mai is the perfect contrast to Bangkok, and ideal for relaxing and taking in the local northern culture. The famous Buddhist temple of Wat Phrathat Doi Suthep sits on the hilltop just outside the city, and gives a fantastic view over the whole area.

Lying just outside the capital of Bangkok, Ayutthaya is one of the most historic cities in Thailand, and was once the largest city in the world, back in the 17th century. While much of the ancient city was destroyed, enough remains to gaze in awe and wonder at the structures that hint of Ayutthaya’s rich and lucrative past. And once you have had your fill of ancient Buddhist temples, head off to the floating markets and do your shopping by boat.

Located in the far north of Thailand, Chiang Rai is most famous for the breathtakingly beautiful sight of the famous White Temple. The city is often used as a base for exploring the north of the country, especially the area of the Golden Triangle. Chiang rai has a strange past, and the Opium Museum in the city explains the role of the plant that was grown in massive quantities in the past to export around the world as one of history’s most prolific narcotics. 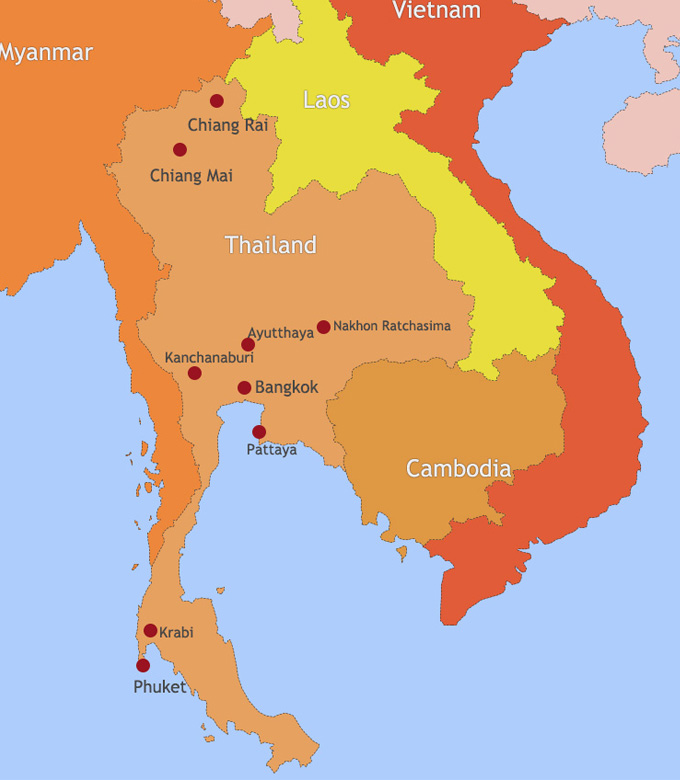 Made famous around the world by the Film “Bridge over the River Kwai”, which showed the horrors of the POWs and locals that dies constructing Japan’s Death Railway, Kanchanaburi is actually a beautiful city set in lush green surroundings. The breathtaking scenery of the area is popular with trekkers that come to hike in the hills, and the nearby Erawan Park is a stunning place to visit, with the Erawan and Sai Yok Noi waterfalls are spectacular sights to behold.

Once the most popular beach resort with American soldiers stationed in Bangkok during the Vietnam War, Pattaya is not for everyone, with go-go bars, massage parlors with added extras, and the inimitable sex trade being the main draw for most travelers. However, with some of the sex trade in the city now being cleaned up, it is once again a delightful place to spend at the beaches that lie close by the city, with a wide range of watersports and shopping centers for more normal tourists.

Locally referred to as “Korat”, this lively city is filled with expansive markets, small street stalls, and little else. However, the nearby Khao Yai National Park is a great place to visit, and is home to a variety of local species, including Asian elephants, monitor lizards, gibbons, and a lot more. Stunning scenery and expansive hiking trails also make this a great place to spend a few days, and the Phimai ruins nearby are reminiscent of Cambodia’s Angkor Wat in style and design.

Once the capital of ancient Siam, Sukhothai sits with a wealth of historical sites on its doorstep. There is little to see in the city itself, though it is a laid back and relaxing place to visit. Most of the ruins of the ancient capital lies in the Sukhothai Historical Park, where archaeological sites show ruins that date back to the 13th and 14th centuries, which has often been referred to as the golden age of Thai civilization.

Located on the southern coast, on the Gulf of Thailand, Surat Thani is the gateway to many of the beautiful islands that lie in the shining azure waters of the Gulf. From here, most tourists travel to the islands of Koh Samui, Koh Phangan and Koh Tao, which are the more popular of the local islands. However, while most people pass through on the way to the stunning island beaches, the town itself has plenty of bustling markets and an authentic traditional Thai feel that makes it an interesting place to explore.

Possibly the smallest city in Thailand, Krabi Town is one of the most authentic destinations in the country for traditional Thai culture and artifacts. The local night markets sell a huge variety of local crafts, and the small back streets are filled with massage parlors, which only give massages and spa treatments. Outside the town is the glittering Tiger Temple, set on a high hilltops with amazing views of the surrounding countryside.

Check for more about travel alone in Krabi.

How to travel among the cities in Thailand?

When it comes to stunning attractions in the cities of Thailand, there are more than can be counted, and for anyone wishing to tour the cities of this beautiful Land of Smiles, you will be overwhelmed by the awesome variety that lies before you.

In Bangkok, you have some of the most amazing sights in Thailand, from the renowned Grand Palace of the Thai king to the giant Reclining Buddha that lies on the hilltop overlooking the city. Chiang Mai may be far in the north, but as tourist attractions go, the famous Wat Phrathat Doi Suthep is among the most spectacular temples in Asia, and dates back to the time of the Siamese Empire.

Ayutthaya has more sites of interest than most of the rest of Thailand put together, but the most famous and popular are the temples of Wat Phra Si Sanphet and Wat Phu Khao Thong, which are mesmerizing in their beauty and ornate architecture, much of which has been lost to time.

The Golden Triangle in the north of Thailand, near Chiang Rai, is a popular attraction for international tourists, who wonder at the fact that you are standing at the join of three major Asian countries, Laos, Myanmar, and Thailand. Truth be told, the Golden Triangle itself is something of an anticlimax, and the boat trips on the river are much more exciting.

There is nowhere more inspiring in Thailand than the museums in Kanchanaburi, dedicated to the hundreds of thousands of soldiers and civilians that lost their lives building the most horrific railway line in history. The museums tell the story of the people that gave their lives, and the many temples that lie nearby are constantly in prayer to bless the souls of those fallen heroes.

Many more exciting attractions lie in the wondrous cities of Thailand, and for you to experience them all would indeed take an entire lifetime of exploration and discovery. A tour of the main cities alone can be a long and exciting time, and for those with a love of Thailand’s long and varied history, these major cities tell the story in their own way, in terms of ancient architecture, long-lost civilizations, exciting cuisines, and traditional cultures. While you can explore all the beaches in Thailand, you will not find the excitement that comes with exploring the back alleys of Bangkok, or the museums of Kanchanaburi, or trekking in the hills above Chiang Mai and Chiang Rai, for that ultimate feeling of awesome adventure that few places in the world bring to you as well as Thailand, the Land of Smiles.