All about Vietnam Traditional Costumes 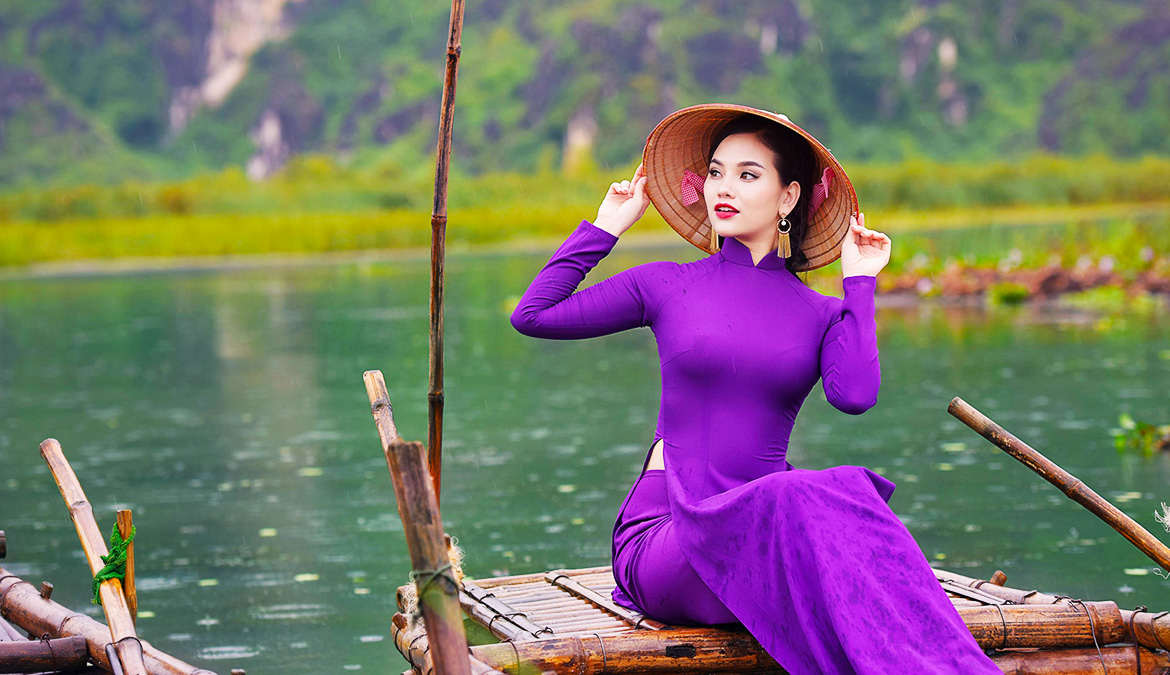 Lying in the Indochinese peninsula, Vietnam has had a long and varied history, dating back more than 4,800 years to the time of the ancient Hong Bang Dynasties. However, a traditional form of clothing in Vietnam was not favored until around the 18th century. But with 54 ethnic cultures in Vietnam, even the recognized modern National Costume is not the traditional dress of many Vietnamese ethnic people. Clothing is an important part of any culture, and travel in Vietnam, you can find several different styles of traditional costumes within the many ethnic cultures, though all have one thing in common – bright contradictory colors and very vibrant patterns.

The modern traditional costume known as the Ao Dai has not always been the typical form of dress in Vietnam. Previously, clothing was simple for the peasant folk of Vietnam, while the nobility wore versions of Chinese historical clothing known as Ao Giao Linh. This changed in the 18th century, with the advent of a more traditional type of dress that was more suited to both men and women alike. The form of clothing now known as the Ao Dai was developed from the Han Chinese form of dress, due to the requirement of the Nguyen Dynasty for men at court in Hue in 1744 to wear trousers and a gown that buttoned down the front. The garment was described as simply a “Long garment”, and the name Ao Dai was coined. 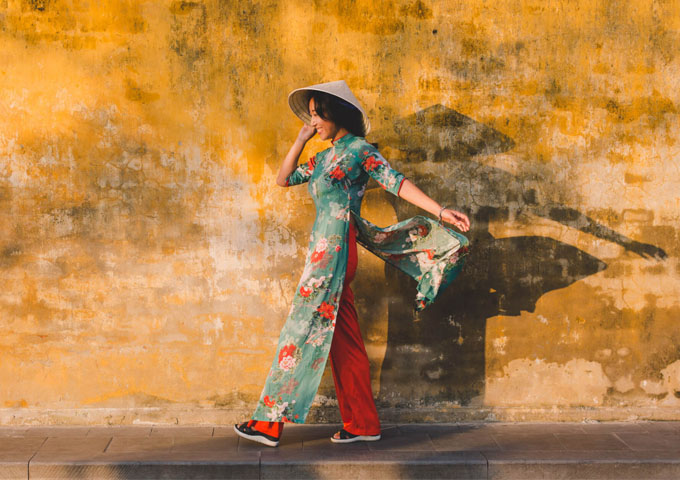 However, it was not until the 1920s that the costume of today was developed. The traditional clothing was made from several pieces of cloth, sewn together in flaps to make the front and back of the lower part of the long garment, which appeared to make the garment split down the sides, a feature that has been preserved in the modern version of the Ao Dai. The original Ao Dai also had broader flaps and a looser fit, and was much shorter, with a high collar that was buttoned at the neck. The older version of the dress was developed by the Dong Khanh Girl’s High School in Hue in 1917 as their uniform, and in 1921, a modernized version first appeared in public at the Paris Fashion Show. The style was further modernized in the 1930s, and in the 1950s, it was given its close-fitting look by designers in Saigon, to finish with the style we know today as the modern Ao Dai. 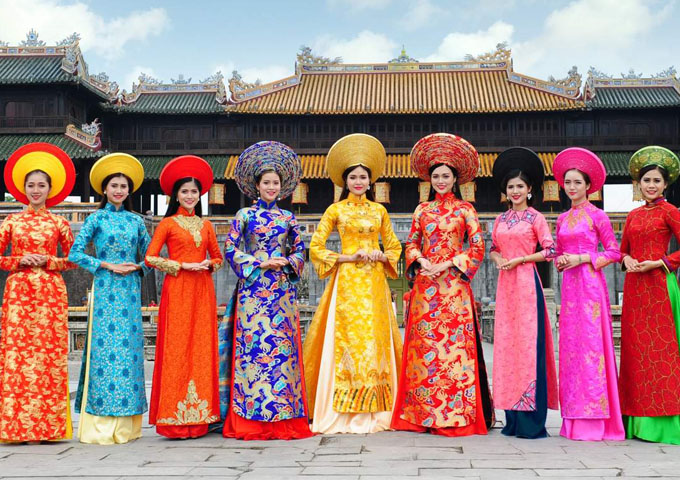 The Ao Dai was praised as being the National Costume in the early 1970s, when Vietcong negotiator, Nguyen Thi Binh, wore one to the Paris Peace Conference, but the idea died out during the war with Cambodia in the 1980s. It was not until the late 1980s that the Ao Dai saw its full revival, when the national costume was once again adopted by state schools and enterprises as the recognized uniform for school and work. This came to its biggest peak in 1995, when the Vietnamese contestant for the Miss International pageant in Tokyo won Best National Costume for her Ao Dai, and it was proclaimed in Vietnamese media that the country’s “national soul” was once again being honored.

Now a standard dress for weddings, the celebration of Tet, the Vietnamese New Year, and other formal occasions, the Ao Dai has lost its political controversy of the 1960s and 1970s, and is often referred to as the “ao dai Viet Nam”, to link it fully to the patriotic feelings of the people.

How many types of Vietnam costumes

With 54 ethnic cultures across the entire country, there are several types of traditional costumes, and they are different for the major ethnic cultures, such as the costumes of the Hmong and Cham peoples.

Among most Vietnamese, the Ao Dai, for both man and women, is still the most popular and common form of traditional costume. For men, the Ao Dai is a long tunic made from silk, with a traditional tight collar at the neck, and buttons down the left side to fasten the garment. Generally split at the sides to the waist, the male tunic falls to just below the knees, and is worn with loose pants underneath. 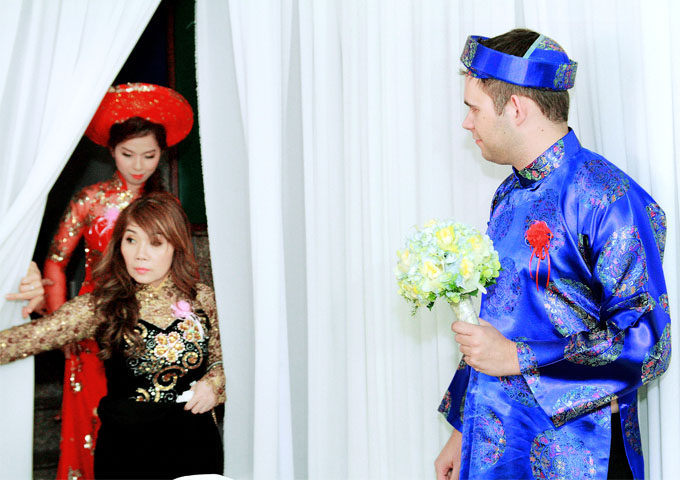 For women, the Ao Dai is a little different, being more of a dress than a tunic. While there are several similarities to the male version, the female Ao Dai is very tight fitting from neck to hips, and flows down to the ankles. The Ao Dai comes in two main types: one made from four flaps that buttons in the front, and one with an added flap to secure it at the right side. In the north of Vietnam, the Ao Dai is traditionally worn over a long skirt, often with a hat made of leaves or a head scarf. In the south, the Ao Dai goes over colorful loose-fitting pants. The Southern Ao Dai is split from the waist in two panels at the front and back, while the northern version sometimes has no slits in the sides.

Contrary to all other regions, the women of the Mekong Delta area wear a different form of traditional dress, known as the Ao Ba Ba. The costume consists of a long shirt that has a single piece for the back and two pieces for the front, with straps that run from the neck to the waist. This elaborate garment is normally worn with loose-fitting long black or white pants, stopping just above the ankles. 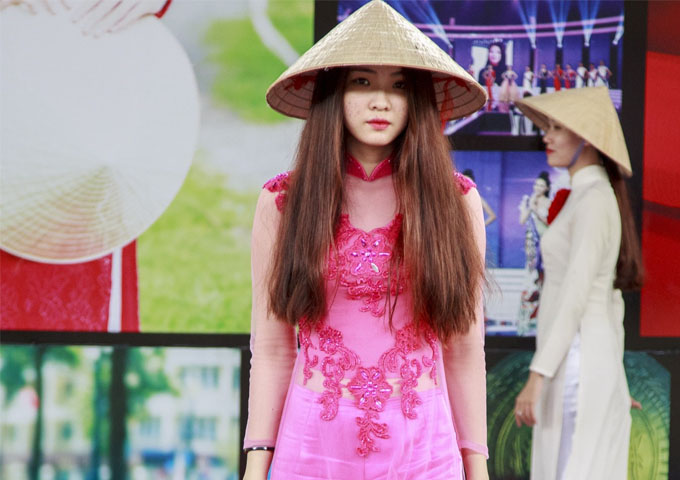 Vietnam has its own community of Thai ethnic minorities, who have their own traditional costume that is a part of Vietnam’s heritage. The dress, which is normally worn by women, consists of a plain blouse over a long dark skirt, and is accompanied by wide sash belts and adorned with embroidery and motifs.

The traditional dress of the Hmong ethnic people of Vietnam is very different to any others. Preferring a more sophisticated, vibrant, and colorful style, with a little bohemian flair, the Hmong traditional costume is made from linen and consists of a black or blue shirt, colorful long skirt in multiple layers, bright leggings, and colorful headgear. The costume is often decorated with beads and jewels, to add some individuality to the costume. 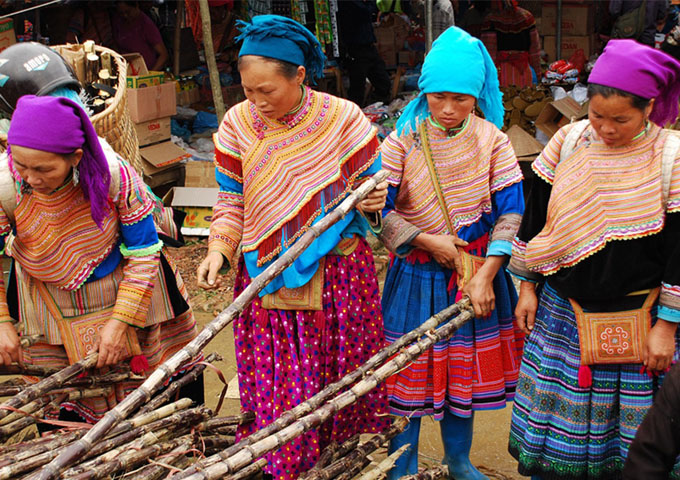 The Cham traditional costume is not as bright and colorful as the rest, but has a sophisticated charm. A tight-fitting tunic is worn with a skirt of the same color, often with a loose-fitted headscarf. A decorated band of cloth is wrapped around the chest and waist, and the costume is finished with long beaded necklaces. 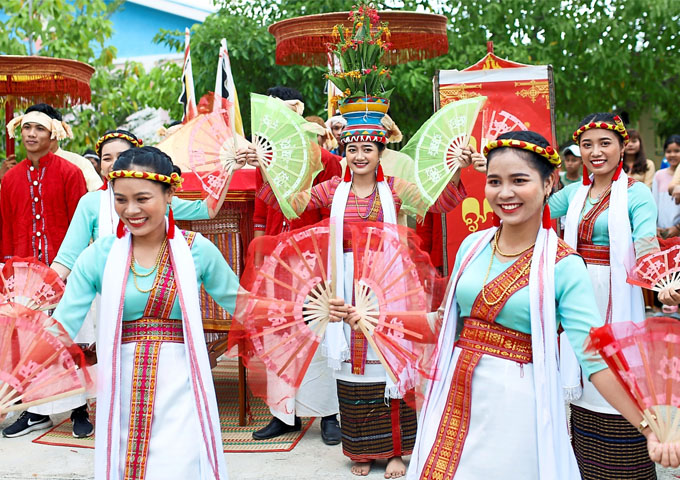 In the mountains of the far north, the various ethnic tribes commonly wear costumes that are made up of long skirts and pants with indigo-colored vests, often embroidered with animals and flowers. Designed to make it easier to navigate the steep mountain slopes, the style of costume makes farming easier to manage, and are simpler than most other traditional costumes in Vietnam.

Where to rent costumes during Vietnam tour?

If you are traveling to Vietnam and are looking to rent or buy one of the traditional costumes, then you have a lot of options for places to get them. A popular pastime for tourists to Vietnam is to rent the costume for your own photoshoot, so that you can have vivid memories of the trip. Hang Gai Street, in the old quarter of Hanoi is known locally as Silk Street, and has a wealth of tailors that will gladly make you your own custom Ao Dai for very little cost.

In Hanoi, there are several places to rent Ai Dai and other costumes, such as the Ao dai Minh Duc, a shop that specializes in making and renting out Ao Dai. Located on Dang Tien Dong in Dong Da District of Hanoi, the store is open from 9:00am to 6:00pm seven days a week. 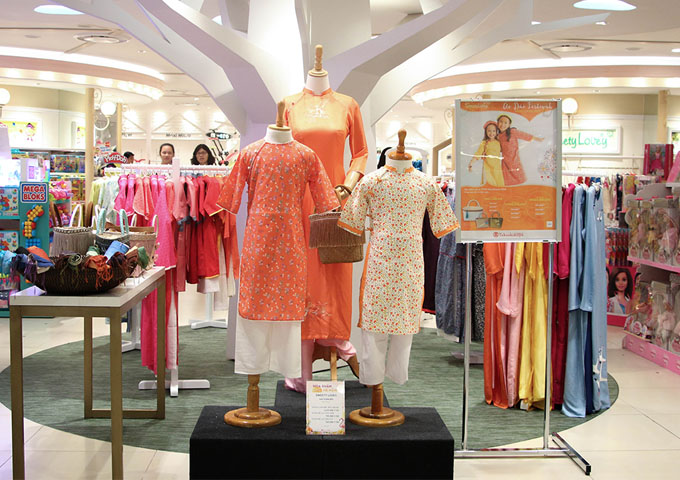 Ao Dai Thanh Mai, on Bach Mai, Truong Dinh, in Hai Ba Trung district, has been offering Ao Dai for rent for more than ten years, and has a reputation as one of the premiere Ao Dai tailors in the city. Open every day, the shop offers several types of costumes for rent, and they can make your own if you want.

Ao Dai Oi, on Dinh Cong Trang in Quan 1 of Ho Chi Minh City is one of the best rental shops for Ai Dai in the city, with several types of traditional costumes available. The store is open from 8:00am to 5:30pm daily. Close by, on Cach Mang Thang Tam, you also have the Cho Thue Ai Dai store, which is open from 9:00am to 9:00pm daily. With a wide selection of classic and modern Ao Dai and other costumes, the store has three other branches at P.Ben Thanh, Tran Huy Lieu, and Nguyen Van Luong.

Ao Dai may be a more recent style of traditional costume than many national costumes in Asia, but they are well designed and strikingly beautiful, and have become popular around the world over the last 30 years. If you are planning on visiting Vietnam, then you should check out the rental places for costume rental for some of the best photoshoots in Vietnam. There is nothing like a great photo set in local costume when you get home to remind you of the amazing experience that is Vietnam. Alternatively, you can buy the Ao Dai or other costumes for a small amount, or have them made to fit for a little more. of the proud people of the north.