Is December a Good Time to Travel to Vietnam? 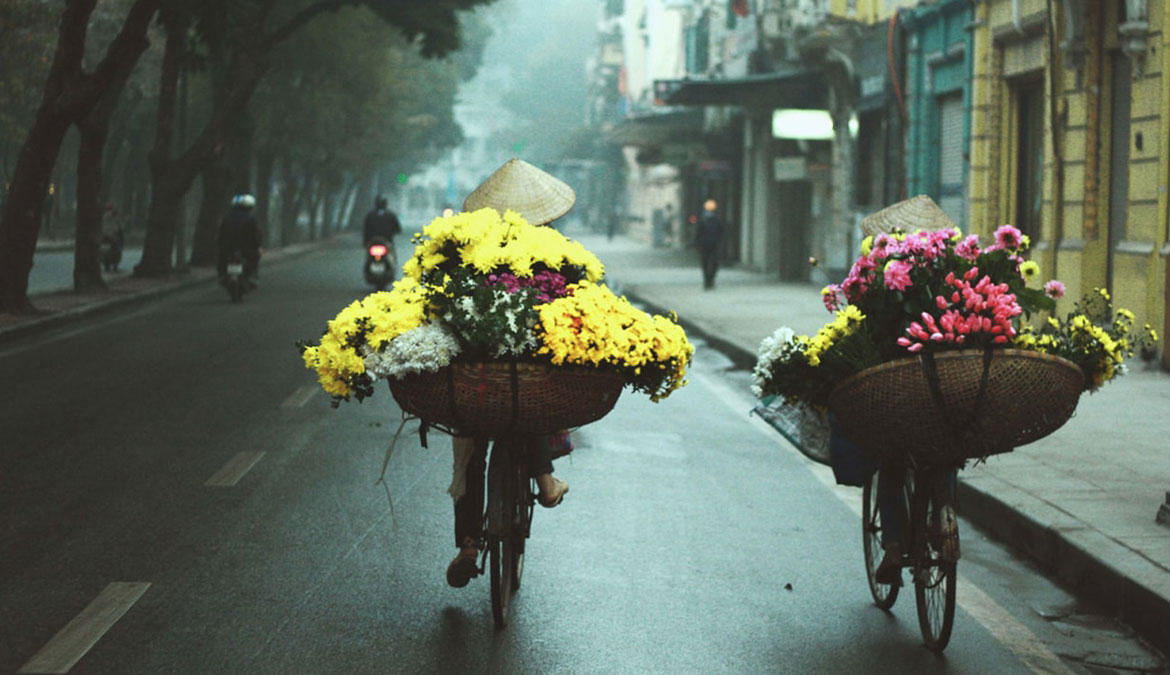 December is an excellent time to travel to Vietnam, Southeast Asia. Air temperatures are way above 0°C/32°F, with average lows dropping below 10°C/50°F only in the far north (Sa Pa). The fact is, the more south you get, the less cloth you will need. In Ho Chi Minh City, for example, you won't have trouble warming, but cooling yourself.

You are also likely to avoid heavy rainfall when traveling Vietnam in December if you are careful. In general, areas in the north and south feature low precipitation this time of year. Rain is more abundant in central areas of the republic.

To learn everything you need to know about traveling to Vietnam in December, continue reading.

What is the weather like in Vietnam in December?

Now that you know the basics about Vietnam weather in December, let's dig into juicy details. The fact is that weather conditions tend to be complicated since this Southeast Asian country stretches from north to south. Its geography and location, with the South China Sea to the east and the Gulf of Thailand to the southwest, also influence weather conditions to a large extent.

The area around Hanoi, the Vietnamese capital, and regions approaching the Chinese border are part of North Vietnam. If you wish to avoid scorching in the sun during your trip, come to the northern areas of the socialist republic. But, is December cold in the hilly mountains and flat Red River delta in northern Vietnam? No way.

Northeast monsoon can bring light rains during this period but is unlikely to disrupt your travel plans. In December, Hanoi features several wet days, with liquids barely amounting 25mm/1in on average.

If you visit Halong Bay near Hanoi, you may wish to bring a swimsuit. The average sea temperature is around 23°C/73°F this time of year.

The nation's central parts extend roughly from Dong Hoi in the north to Nha Trang and Dalat in the south. Once you arrive there in December, you are likely to ask yourself what season it is in Central Vietnam. And rightfully so since summer temperatures and abundant rainfall will welcome you.

Da Nang, Hoi An, and Hue feature pleasant daily temperatures, with averages varying between around 18°C/64°F and 25°C/77°F. In Qui Nhon further south, it is slightly warmer.

Nha Trang, another city by the South China Sea, is the warmest. During December, temperatures range from the lower to upper 20s on the Celsius scale (lower 70s to lower 80s on the Fahrenheit) there. 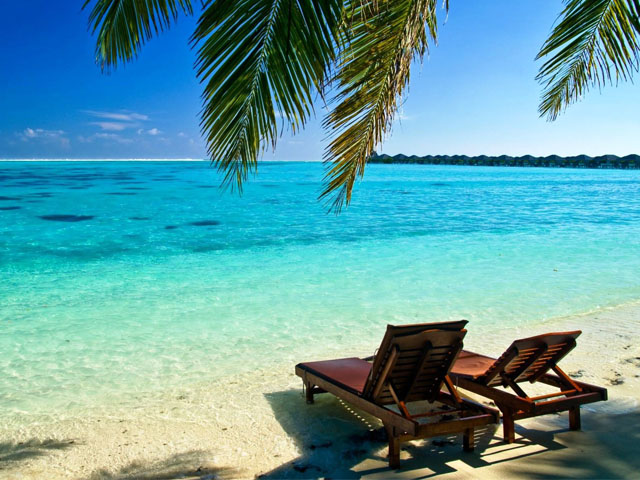 The northeast monsoon brings higher precipitation to destinations along the coastline of the South China Sea. In Da Nang, the last annual month features around 20 wet days, while Nha Trang has 10. However, the amount of rainfall is barely different, around 200mm/8in in each destination. For a lower chance of a rainy day at the beach, go to Qui Nhon, located between these holiday destinations. For still a lower chance of cloudy and rainy weather, travel inland to Pleiku or Dalat.

Areas around Ho Chi Minh, the largest city of the Socialist Republic of Vietnam, and the Mekong Delta form Southern Vietnam. This part of the easternmost Southeast Asian nation has summer temperatures even in winter. Daily low temperatures barely drop to 20°C/68°F while highs tend to rise over 30°C/86°F.

In December, the sea is warm, even hot by some travelers' standards - around 28°C/82°F. As for the precipitation, there is barely any in southern regions of Vietnam this time of year. Ho Chi Minh City has seven wet days, which produce around 50mm/2in of liquids, in the first month of winter.

What are the best places to travel to Vietnam in December?

From the temperate north to the hot south, there are many destinations you would like to visit in Vietnam in December. You are highly unlikely to cover more than 100km/62mi without having something noteworthy to see. But, if you don't have all the time in the world for traveling the republic, better prioritize some of the following top Vietnamese tourist destinations.

Hanoi, the nation's capital, is a sprawling city featuring centuries' old and modern buildings. Traces of French rule are present in both architecture and gastronomy, while museums and memorials evoke the Vietnamese past. Expansive lakes offer various leisure activities, while markets grant great shopping. Taking a week-long round tour of Hanoi will be a great option. 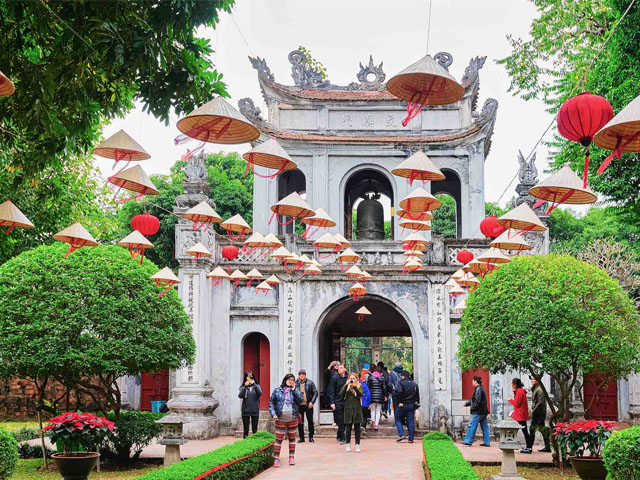 Visit Hanoi to trace the old days of Vietnam.

Noted for its limestone formations rising from the sea, Halong Bay is a paradise for sightseeing and vacationing. The islands range in size and shape, sculpted by persistent artists of nature - winds. You can join public cruises, with varying prices and quality, or organize a private tour. 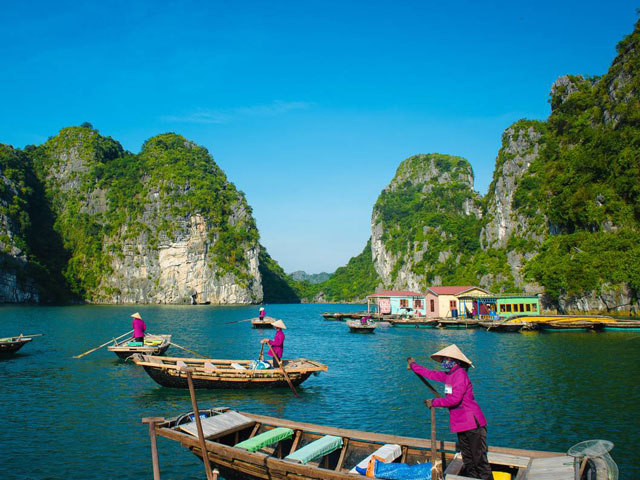 Halong Bay in December is a paradise for sightseeing.

Located in the northwestern corner of Vietnam, Sa Pa is a paradise for nature enthusiasts and trekkers. Its paddy fields are among the most photogenic landscapes in Southeast Asia. Also, travelers can acquaint themselves with the traditions of various hill tribes, including Black Hmong, Flower Hmong, Red Dao, and others.

Former Saigon is the country's most populous city, boasting excellent shopping, delicious food, and premium beer. You can find various museums and landmarks reminding of HCMC’s turbulent past and foreign influences, such as multi-styled Notre Dame Cathedral and War Remnants Museum. The Mekong Delta, offering insightful and entertaining cruises, is a short distance from Ho Chi Minh City.

West of Hanoi, you will find scenic Moc Chau, in the province of San La. The plateau teems with beauties of nature, such as waterfalls, caves, and verdant hills and mountains. Tea plantations add a nice touch to a diverse environment.

Da Nang in Central Vietnam is one of the main seaside holiday resorts. Besides relaxing at the beach, visit the Marble Mountains, and acquaint yourself with the Cham culture.

Hoi An is the Venice of Southeast Asia, successfully blending architectural styles of the East and the West. Take a bike to explore the nearby countryside and discover rice fields. Of course, don't forget to relax at the beach and take a cruise to the Cham Islands.

Hue is the former imperial city whose relics testify about its remarkable past. In this tourist destination, you will find a fortified imperial citadel, pagodas (religious structures), and the tombs of emperors. Taking a Perfume River cruise is a must for first-time visitors, especially at sundown. 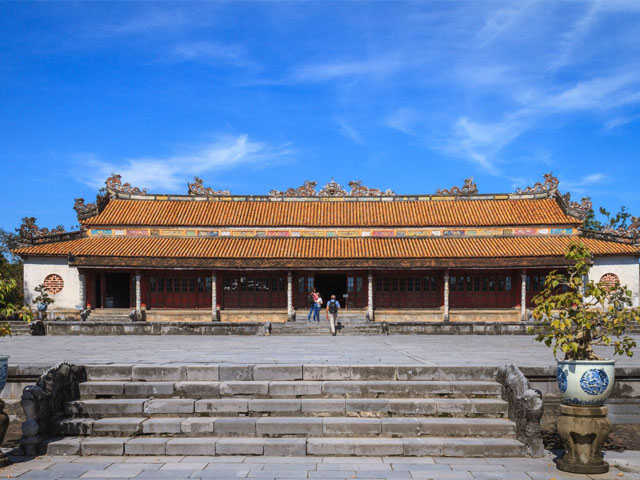 Cultural Sightseeing in Hue is ideal in December.

Dubbed as "the City of Eternal Spring" and "the Paris of Vietnam," Dalat offers various alternatives to fans of nature and sightseers. Access vantage points of Lang Biang Mountains, walk among sunflowers flowering in December, and discover waterfalls. Take photos of Crazy House, whose architecture is hardly anything you would expect to see in Southeast Asia.

Phu Quoc Island, located off the mainland in the Gulf of Thailand, is an excellent holiday destination for active people. There, you can swim in pure waters, relax at the white-sand beaches, hike through jungles, and climb mountains. The northern part of Phu Quoc enjoys a UNESCO National Park status. 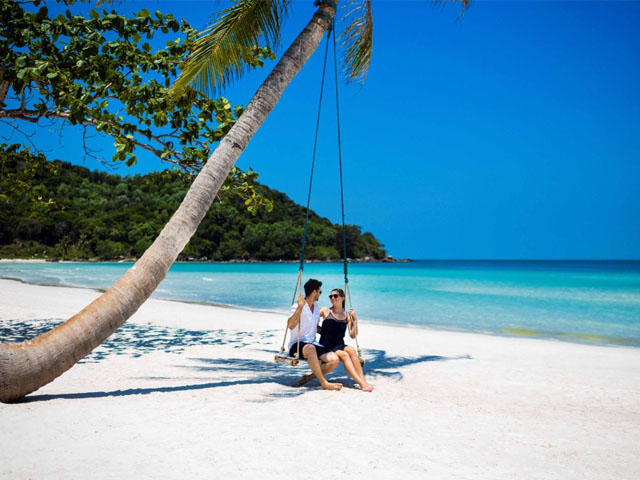 Relax at the white-sand beaches of Phu Quoc Island in December.

In Cao Bang Province next to the border with China, you will find falls forming Ban Gioc Waterfall. Surrounded by lush greenery, the waterfall is about 70 meters/230 feet high. Regular buses run from Cao Bang, the capital of the province, to Ban Gioc. 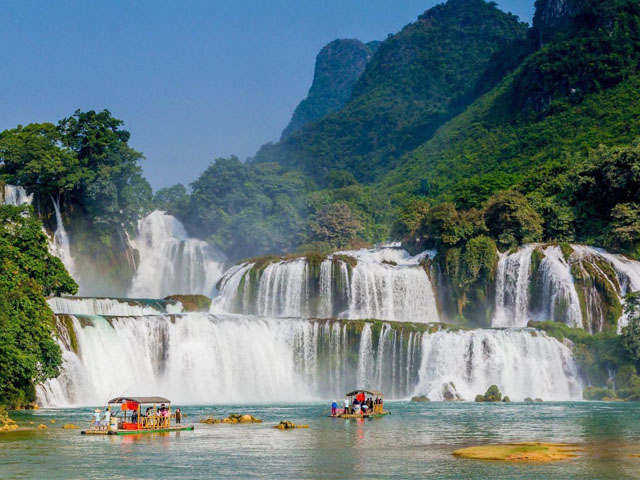 It is OK to visit Ban Gioc Waterfall in December.

Christmas is Celebrated in Vietnam in December

Albeit Xmas isn't an official holiday in Vietnam, the Christian celebration takes place in various Vietnamese destinations. Hanoi, Ho Chi Minh City, Nha Trang, and Hoi An are just a few of them. During Christmastime, streets and buildings, such as hotels, feature opulent Christmas decorations. This may be another reason that attract you to visit Vietnam in December.

Celebrations start on the Xmas eve and proceed until the next day. As you stroll around, you can observe nativity scenes in churches and streets, listen to musical performances, and shop until you drop.

What to pack for traveling to Vietnam in December?

If you plan to travel from far north to far south of the socialist republic, you will need everything from warm to minimalist outfit. For touring Central (Da Nang, Nha Trang) and South Vietnam (Ho Chi Minh), all you need is a light cloth and, occasionally, a jacket and trousers. For visiting northern (Hanoi, Sa Pa, Halong Bay) and central regions, bring a raincoat.

So, T-shirts, shorts, short-sleeved shirts, and sandals are probably all you will need when traveling to South Vietnam. Add jackets, light trousers, and pullovers to your luggage when going north, up to the Vietnamese capital. In the far north of the country, you should have down coats, gloves, and warm hats at hand.

Check whether you need a visa to visit Vietnam since some foreign nationals need this travel document, while others don't. Also, confirm the validity of your passport, whose expiration date shouldn't be less than six months from the date you end the trip. For short stays, up to 30 days, you can obtain a Vietnam visa online. For longer visits, you may need to contact the embassy.