Home > blog > Most Complete Guide for an Angork Wat Tour

Most Complete Guide for an Angork Wat Tour

In the northern region of Cambodia, buried amidst the jungle in Siem Reap Province, lies one of the world’s most famous temple complexes. On a site that covers over 400 square kilometers, it is the largest temple complex in the world, and the most famous. For many people, Angkor Wat is the highlight of any tour to Cambodia. 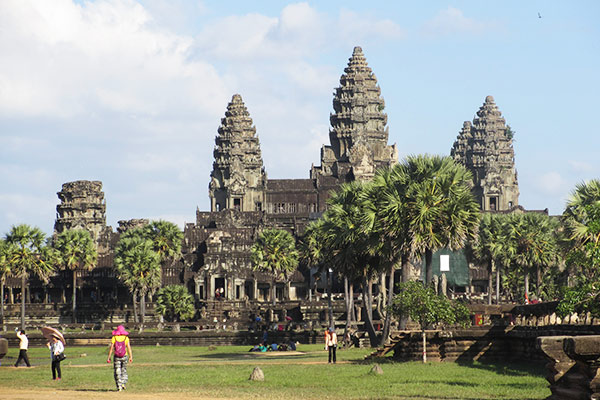 Built in the era of the Khmer Empire, the temples were constructed to honor the Hindu god, Vishnu, by the Khmer king, Suryavarman III in the early 12th century. Angkor, formerly known as Yasodharapura, was the ancient capital of the Khmer Empire, and the temple was built to be the state temple, although it later turned out to be the King’s mausoleum. Traditional Khmer religion had the temples dedicated to Shaiva, but Suryavarman III broke from tradition to dedicate it to Vishnu, one of the principal deities of Hinduism.

Angkor Wat is the southernmost of the temples on the site at Angkor, and is the most popular with tourists. The original name of the temple is unknown, as there are no foundation stela or contemporary inscription at the site. Archaeologists believe that it may have been known then as “Varah Vishnu-lok”, after the deity it was built for. Many of the bas-relief work remains unfinished, and history tells that is ended abruptly after the King’s death. 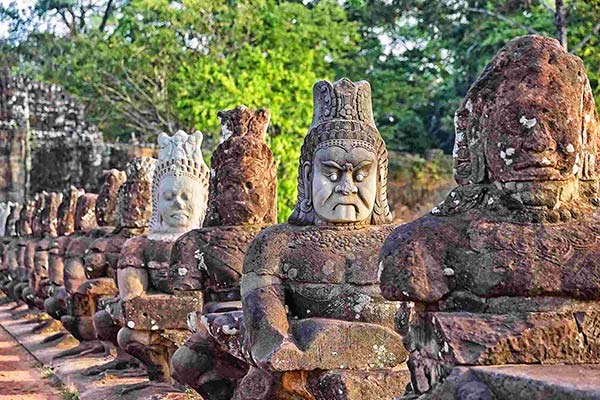 Years later, the temples were sacked by the Cham tribes from eastern Cambodia and Vietnam, who were the traditional enemies of the Khmer people. As the new king, Jayavarman II, rose to the throne, the capital was moved to Angkor Thom, while the Bayon temple became the state temple for the Khmer Empire. Towards the end of the 12th century, the temples were re-dedicated to Buddhism after the fall of the Khmer Empire, a religion that has lasted over the centuries since.

By the 17th century, the temple had become a fully-functioning Buddhist temple, and fourteen inscription dated from that time tell of Japanese Buddhist pilgrims who had established small settlements nearby, alongside the Khmer locals. The temple was thought to be the famous Jetavana Garden of Buddha by the Japanese pilgrims, and inscriptions tell of one Ukondafu Kazufusa who spent the period of the Khmer New Year at the temple in 1632. 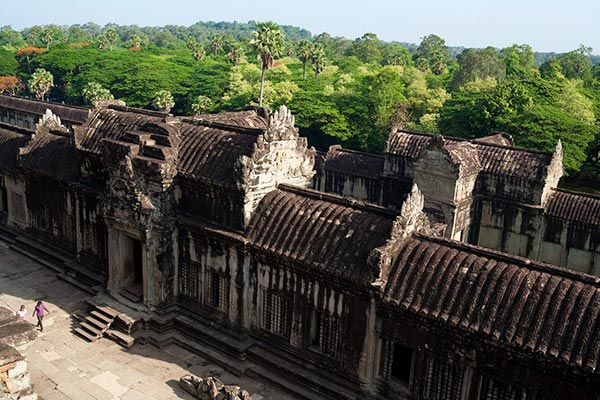 By the middle of the 19th century, the temple had been visited by famous explorers from around the knonw world, including French naturalist Henri Mouhot, whose travel journals popularized the site throughout Europe. He wrote that the temple was a rival to that of King Solomon, and grander than any of the temples of ancient Rome or Greece. He initially believed that the temple was of Roman origin, since there was little evidence at the time of the Khmer Empire being able to erect such a huge site.

In the 20th century, Angkor Wat underwent considerable restoration, which mainly consisted of removing the vegetation and earth that had accumulated over its lower terraces. Fortunately, the temple suffered little damage in the civil war and the Khmer Rouge regime, although more damage was done by thieves in the years immediately after the war ended.

The site at the Angkor Archaeological Park contains more than 45 temples, of which Angkor Wat is just one. Angkor Thom, Bayon Temple, Elephant Terrace, and Preah Khan are just a few of the more famous of the temples on the site. Angkor Wat is the heart of the immense site, and has become the symbol of Cambodia, even being portrayed on its flag. The best preserved of all the temples on the site, Angkor Wat was never abandoned as many others were, though it was neglected somewhat after the 16th century. 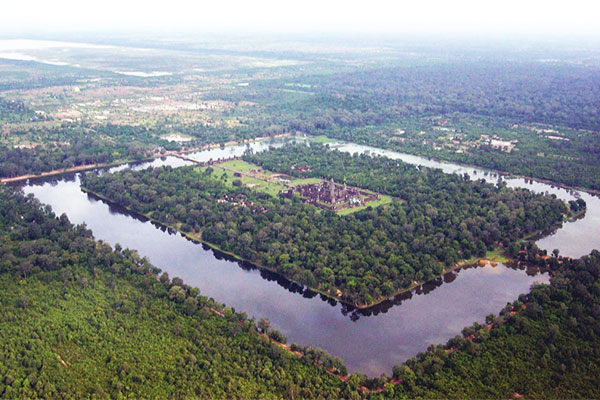 While the place is always packed with tourists, it is a breathtaking sight to see, and there are many small alleys and side rooms where you can get a little peace and quiet to contemplate the beauty and majesty of your surroundings. With over two million visitors a year, Angkor Wat is a place where you can do it the wrong way, or the right way, and many people do it the wrong way.

For most people, the Angkor temple complex consists of just three main temples, Angkor Wat, BAyon Temple, and Ta Prohm. Angkor Wat is the first temple you will come to, and often the most important for many tourists. The sunrise over the complex is the subject of every visitors lens, and thousands crowd the west gate just before sunrise to get in for the best spots to capture this beautiful moment forever. Once inside, nothing can prepare you for the immense beauty of the temple, with its five, perfectly aligned towers standing proud above the complex. 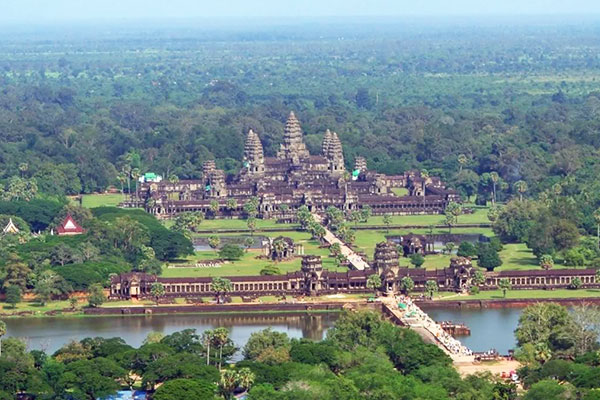 One of the best ways to get into Angkor without having to jostle through the crowds is to use the east gate, as there are a lot fewer people there. Then it is just a short walk to the back side of Angkor Wat itself, through back alleys and empty stone corridors. From here, you can watch the sunrise with less of a crush, and the sunlight lights up the stones from the east in such a way that makes the series of shots more worthwhile than the actual sunrise. After the sun has peaked over the temple, many of the crowds will have departed, and you will be able to spend some time exploring the temple in peace, before the world descends on it once more.

The temple of Angkor Wat is constructed on the traditional design for the Khmer Empire’s state temples, consisting of a temple mountain combined with a series of concentric galleries. The temple mountain is designed to represent Mount Meru, the home of the gods, and the five towers of the temple represent the five peaks of the mountain, with the walls and moat following the landscape of the surrounding mountains and the seas. 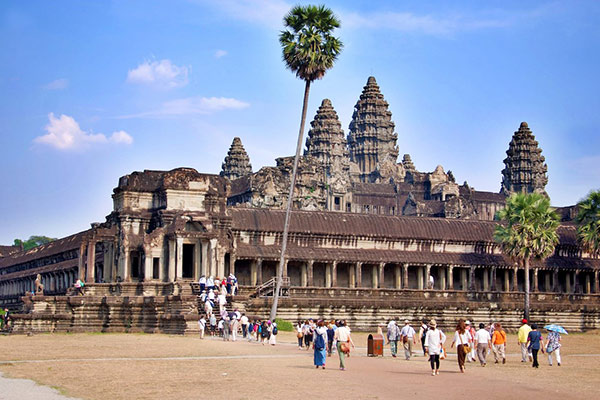 The temple, unusually, is oriented to face the west, instead of traditionally facing east, and it is thought that this was done for the distinct purpose of it eventually becoming the king’s funerary temple. The bas-reliefs of the temple are also reversed, proceeding counter-clockwise, much like the reverse order of the rituals of the Brahminic funerals.

The temple, like many others of its period, is mostly made from sandstone blocks, instead of the previous brick structures of the early part of the Khmer Empire. The temple features a 190 meter-wide moat, followed by the outer wall around the inner perimeter of the moat. Inside this enclosure, surrounding the main body of the temple mountain, are a series of structures that were once the libraries, the city and the royal palace. None of the city buildings, which would have been made of wood, have lasted through the centuries, only the outlines of the ancient roads. The central structure of the temple is also enclosed in a walled compound, entered from the west, after passing through the cruciform terrace.

One of the things that Angkor Wat is most famous for is its extensive decoration. Majority of the decorations take the form of bas-relief friezes, and the inner walls of the outer galleries are covered with scenes that depict episodes from the ancient Hindu epics, the Ramayana and the Mahabharata. Noted for being the largest known linear arrangement of stone carvings in the world, the carvings run around the galleries counter-clockwise from the north-west corner. The western gallery depicts the Battle of Lanka and the Battle of Kurukshetra, while the southern gallery portrays the historical scenes of Suryavarman II, followed by the 32 hells and 37 heavens of Hinduism. 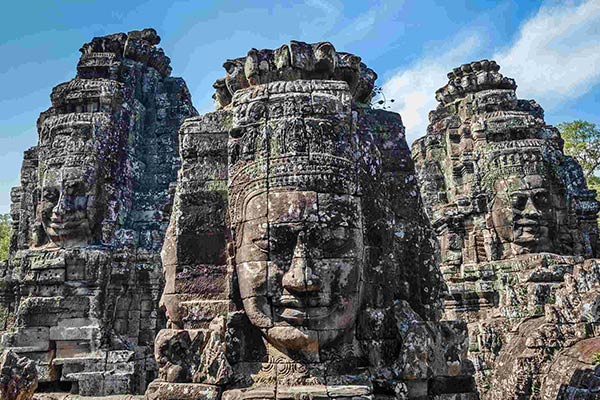 The eastern gallery is one of the most famous scenes, the “Churning of the Sea of Milk”, which depicted the 92 asuras (superhuman demons) and 88 devas (benevolent demi-gods) who used the serpent Vasuki to churn the sea under Vishnu. It is followed by the story of Vishnu’s defeat of the asuras, which is believed to have been added in the 16th century. The northern gallery shows the victory of Krishna over Bana, the thousand-armed asura king who was the son of Bali, and the final battle between the Hindu gods and the asuras.

Angkor Wat is a powerful symbol of Cambodia, and inspires great national pride in its people. The temple has been the source of diplomatic relations with neighboring Thailand, as well as France and the United States since the country became a democracy. The temple has drawn praise from around the globe for the delightful harmony of its design.

Angkor Wat is located in the northern province of Siem Reap, around 5 kilometers from the city of Siem Reap. Visitors can travel to the region by plane, direct to Siem reap International Airport from Bangkok, Ho Chi Minh City, Guangzhou, and Seoul, or fly in to Phnom Penh, and get a local flight to Siem Reap.

Buses travel to the region daily from Phnom Penh as well, which is a five-hour trip, or you can rent a car in Phnom Penh to drive yourself.

From Siem Reap it is a 5km walk to Angkor Wat, but if you are not up for a hike in the tropical heat, there are air-conditioned buses that take tourists on group tours to all the temples in the Park, or you can hire cars, motorbikes, and bicycles to travel there under your own steam.