Vietnam New Year and Its Date in 2019

Vietnam New Year, also known as Tet Nguyen Dan or Tet holiday, is considered as the most important and biggest festival of all the festivals in Vietnam. The word “Tet” is Sino-Vietnamese which means “Feast of the First Morning of the First Day”. The same as Chinese New Year, Vietnamese people celebrate the arrival of the spring based on the lunar calendar (Chinese lunar calendar), so you could find that the New Year’s dates are fluctuant in solar calendar. The Vietnam New Year takes place on the first day of the first lunar month which has the date falling in January or February. For 2019, the New Year will come on February 5th. 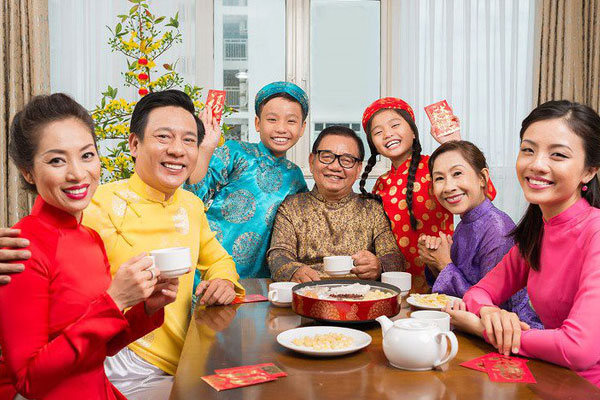 As the most important celebration in Vietnam culture, the Vietnamese people consider the New Year day as a pretty special day to farewell to the old and usher in the new. It is originally celebrate by Vietnamese to thank the gods for the arrival of spring thousands years ago. It is a best time for Vietnamese people paying respects to their ancestors and welcoming the new year with family members. On account of that Vietnam is a country with a majority of farmers, the pleasant gathering with family members could be very precious after a year of hard work. They can totally enjoy the happiness of harvest and expect good weather and good crops in the coming year.

There are also many special celebrations and customs of the Vietnam New Year, and we will introduce all the details about it for your reference if you are going to visit Vietnam during the festival.

Influenced by other Asian countries, Vietnamese people value their families a lot. They usually return to their hometowns and visit the graves of their ancestors as a sign of respect. However, with the development of Vietnam’s reform and the improvement of Vietnamese people’s living standard, the meaning of the New Year has been enriched. So there are several traditional celebrations related to Vietnam New Year.

It could be divided into 3 periods though people generally have only 3 days off: the preparation before New Year’ Eve, the New Year’s Eve and the following New Year.

Before the New Year’s Eve

Before the New Year’s Eve, the preparation begins one or two weeks before the actual celebration. As early as the middle of the 12th lunar month, Vietnam people begin to get busy. The first thing to do is clean up the house, in order to sweep the misfortune of the last year. Similar with Chinese custom, Vietnamese families usually have a family alter. Traditionally, the three kitchen guardians for each house return to heaven on the 23rd day of the last lunar month, so people will burn intense before the pictures of the kitchen guardians and place offerings such as cakes or candy. They will also release a carp back to river to pray the guardians’ smooth return. 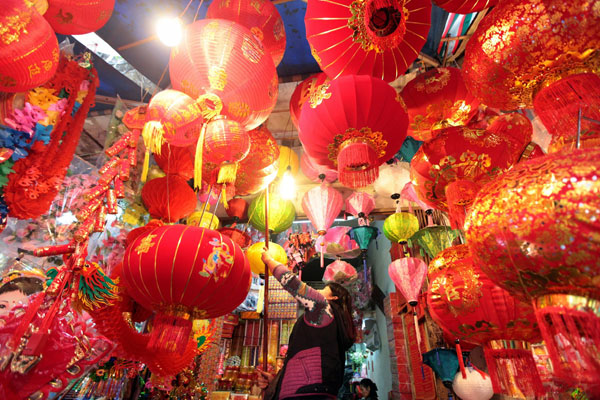 The general atmosphere leading up to the New Year is also in the bustle of shopping, decorating the house and cooking the traditional festival food. Each family will cook special foods and prepare other snacks for the guests visiting home. Besides, people will also try to pay off their debts in advance so that they could be debt-free during the New Year. Parents will buy new clothes for their children so that they can wear them to welcome the new coming year.

On the New Year’s Eve

On the New Year’s Eve, it is reserved for the nuclear family. Like other Asian countries, especially China, Vietnam believe that the color of red and yellow will bring good fortune. Children will receive a red envelope containing money from the elders. This tradition is called “Mung Tuoi” in the north and “Li Xi” in the south. Usually, children wear their new clothes and give their elders the traditional Vietnamese greetings before receive the money. 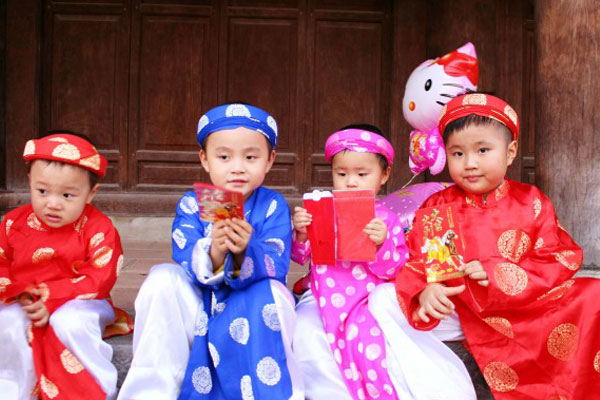 Since the Vietnamese believe that the first visitor a family receives determines their fortune for the entire year, people will never enter any house on the New Year day without being invited. According to the Vietnamese tradition, if good things come to the family on the first day of the lunar New Year, the entire following year will also be full of blessings.

And a person of good temper, morality and success will be the lucky sign for the host family and be welcomed first into the house. This special activity is called “Xong Dat” which is one of the most important rituals during the New Year. However, just in case, the owner of the house will leave the house a few minutes before midnight and come back to prevent anyone else entering the house first who might bring unfortunate events in the New Year to the household.

During the lunar new year in Vietnam, the temperature is around 10℃, therefore on the New Year’s eve, people will wear the traditional clothes, bring the firecrackers and gather to the downtown. When the stroke of the midnight struck, all the firecrackers were set off at the same time. According to the Vietnamese traditional, the firecrackers are fired to ward off the evil spirits. People can throw away all the bad and unpleasant things from past of the year, then welcome an auspicious and hopeful New Year. 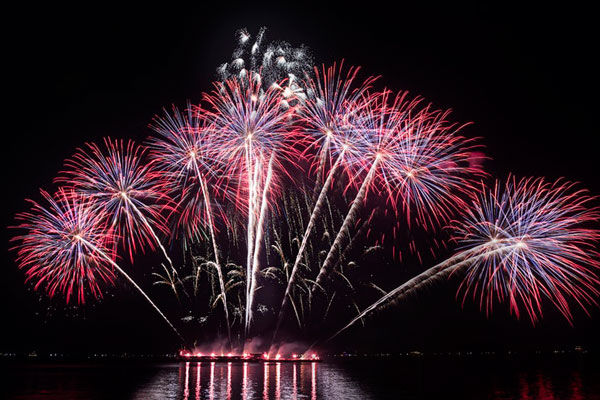 During the subsequent days of holiday, people visit relatives and friends. Children are free to append their new money on toys or on games. And there are also several events such as flower tour, lantern festival, opera performance, folk duet and temple visit during the whole month. Local Buddhist temples are popular spots as people like to give donations. Prosperous families can pay dragon dancers to perform at their houses for entertaining.

During the lunar New Year, every Vietnamese family will buy flowers such as peach blossom and kumquat bonsai to decorate their houses. They buy the fresh flowers at flower market, and peach blossom and kumquat bonsai are so popular because of their lucky moral and also decorative effect. Besides, they will display Cay Neu, an artificial New Year tree consisting of a bamboo pole. The top of it is always decorated with many objects including good luck charms, origami fish or cactus branches depending on the locality. 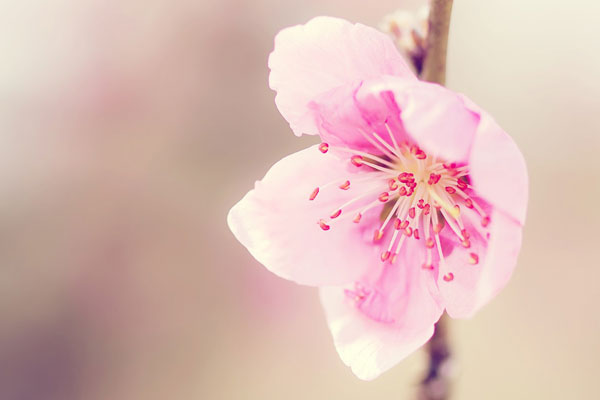 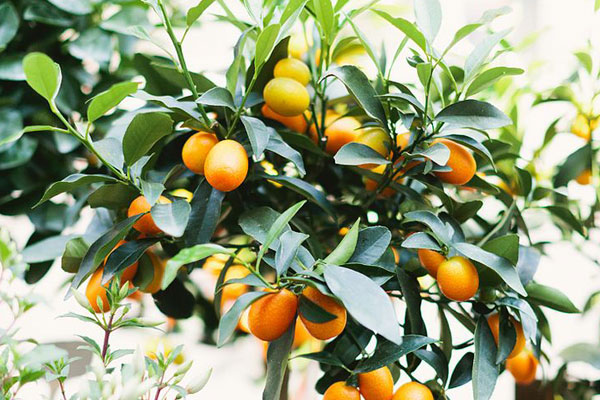 In addition, there is a popular bonsai (fruit basket) called “The Five Bowls” which consists of sweetsop, coconut, mango, fig and papaya. All the fruits in the “bowls” could be pronounced similar with some lucky words in order to pray every year having enough things to spend. And the fruits also symbolize the fertility and fruitfulness that the family hopes for the coming year. 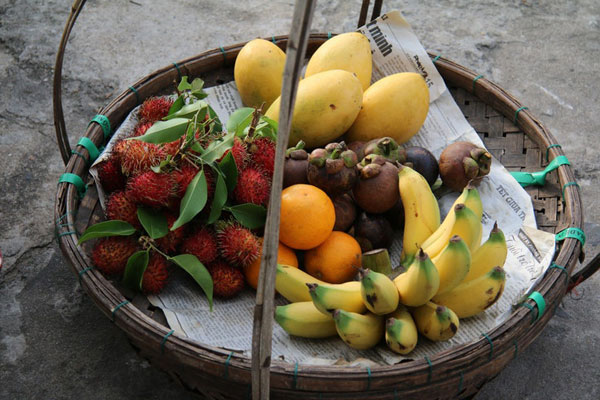 During the lunar New Year, the preparation of traditional dishes is very important. Among all the traditional dishes, the most important is Banh Chung (rice dumpling) which is the spirit of the Vietnamese New Year. Banh Chung is square which expressing the essence of the heave and the earth through the skillful hands of humans. The stuffing of the Banh Chung usually contains sticky rice, pork, masticated green beans, dried onion and pepper and should be wrapped in a kind of special leaves. It always takes over 8 hours to boil because of its big size. People always give homemade Banh Chung to others as present. 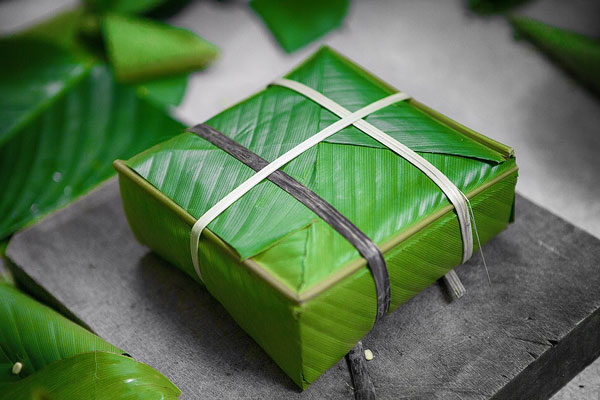 Besides, there is also a kind of sticky rice cake called Banh Tet which is popular in northern Vietnam. There are 2 kinds of Banh Tet———sweet ones and salty ones. The sweet Banh Tet are stuffed with banana and green bean while the salty ones are stuffed with pork and green bean. During the New Year days, Banh Tet acts as a main dish in the whole meal to welcome New Year, usually served with dried shrimps and pickled scallion heads. 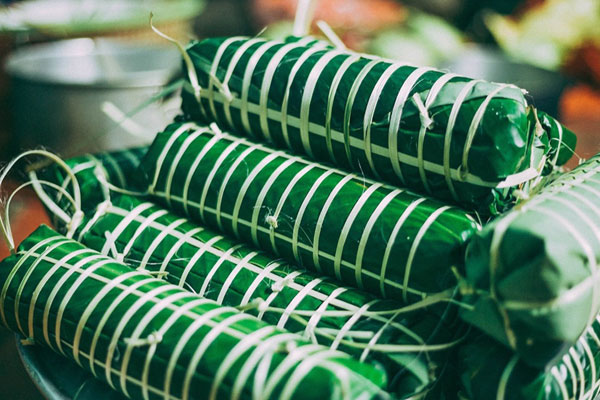 There is also a popular dish among all the New Year dishes called Thit Bo Kho Que which actually is beef braised with cinnamon. They put sliced beef, garlic juice, salt, roasted cinnamon and bamboo strings into a pot and braise until the beef becomes tender. The Thit Bo Kho Que can be served with rice or Banh Chung on the New Year day. 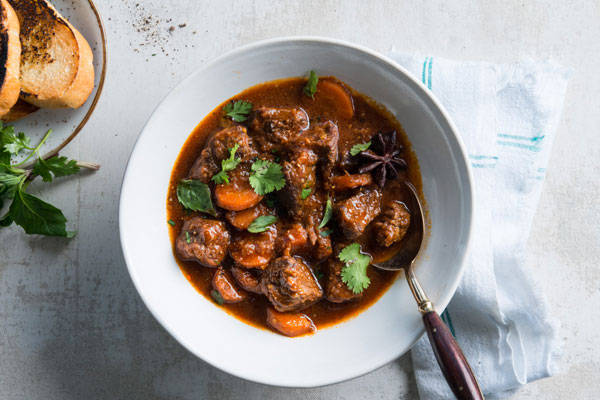 After understanding all the details about Vietnam New Year, do you want to visit Vietnam during the lunar New Year and enjoy the local culture and exotic charm of the country?