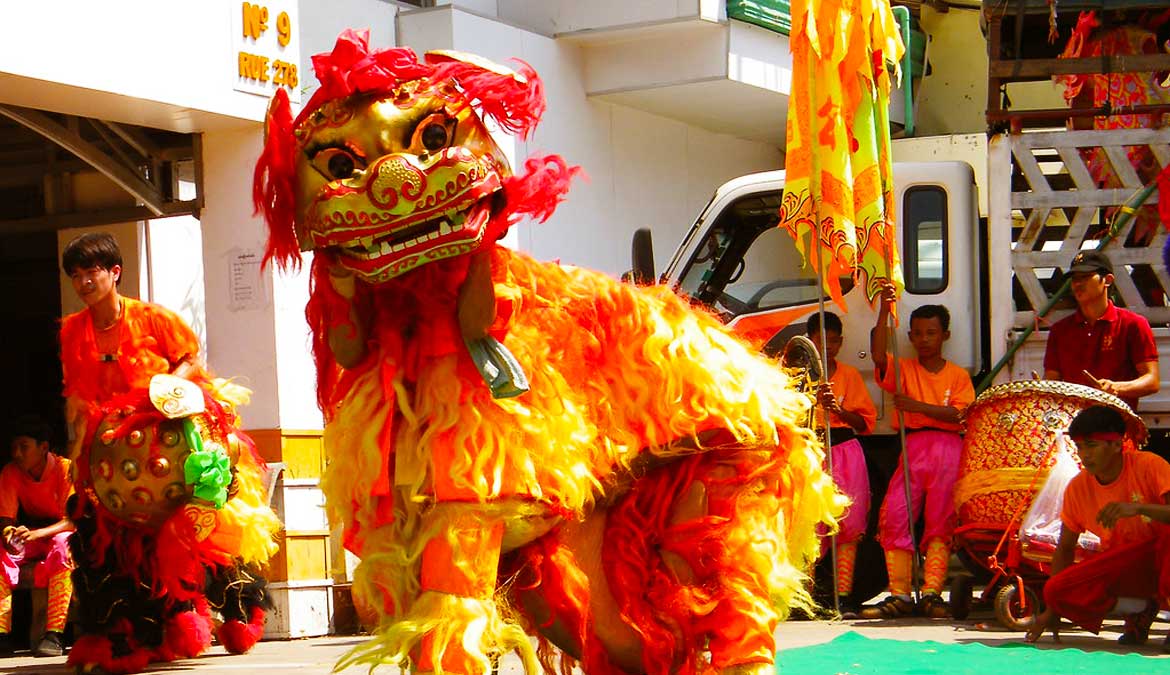 Known as Chol Chnam Thmey in Khmer, the Khmer New Year is the most important event in the Cambodian calendar, and happens in April every year. The name, Chol Chnam Thmey, literally means “Enter New Year”, and is a time for celebration and rejoicing that another year is about to begin. The New Year for 2023 was from Jan. 15 to Jan. 17, which is the traditional three-day celebration of this monumental event. In Cambodia, the New Year holiday lasts for three whole days, and all work is stopped for the event, as people return to their home towns and communities to celebrate with their families.

The Khmer New Year is based on the standard Buddhist calendar, and for the 2023 new year, it will be the year 2562 in the Lunisolar calendar of Cambodia. Traditionally, the New Year celebrations do not follow the lunisolar calendar that the rest of Cambodia uses, but are actually on a set date in the Gregorian calendar, to ensure that the celebrations happen every year at the same time.

Why do Khmer Celebrate the New Year?

The Khmer New Year is held at the end of the harvest season, which is a time of rest for the farmers across the country, having spent the year toiling hard to grow the rice that is the nation’s staple diet. Summer is at its peak in April, and the intense heat of the summer makes it almost impossible to work for long periods in the fields. This rare chance to take a break from the hard work they do all year round is welcomed by the population.

Historically, the Khmer New Year was held in November or early December, and it was this way right up until the 13th century, when the Khmer King moved the celebrations to coincide with the end of the harvest season in the Khmer Empire. While it is not strictly a religious festival, many Cambodian Buddhists visit the temples around the country to pray during the celebrations of New Year, asking the gods for a prosperous year ahead.

How do the Khmer celebrate their New Year?

Celebration of the New Year in Cambodia is marked with visits to the traditional temples to pray, purification ceremonies in their homes, and with numerous traditional games and sports. Cambodian’s spend the run up to the New Year cleaning house, to purify their homes of evil spirits before the start of the New Year. Altars are set up to make offerings to the deities, who it is believed all head for the legendary Mount Meru. 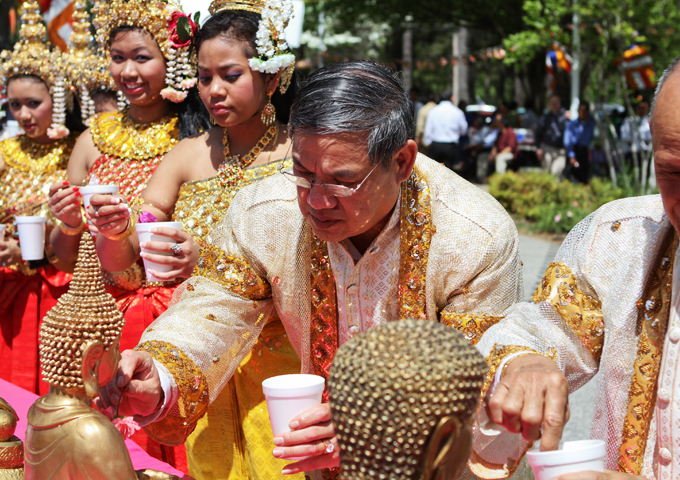 Temple entrances are strung with flower garlands and coconut palm leaves, and incense and candles burn throughout the three days inside the temples. Many Khmer Buddhists still believe that they must visit the pagodas of the dead to pay homage to their ancestors during the New Year, or they may be visited by the ghosts of their dead relatives. Visitors to the pagodas leave offerings on the tombs of their ancestors, or donate food and everyday items to the monks of the temples, which are believed to be passed on to the “grateful”, as the dead ancestors are known, and the more they donate the stronger the wishes of the dead ancestors for them become.

The temples also become a playground for the local people, and many traditional Khmer games are played there during the three days of festivities. Many of the games date back to the time of the Khmer Empire, and while there are no monetary rewards for winning, the players enjoy some small sadistic delight in rapping the knuckles of the losing teams with hard and inedible nuts known as angkunh.

How long does the Khmer New Year festival last?

Traditionally, the Chol Chnam Thmey festivities begin on April 13/14 and last for three days, and each day has its own significance and certain ritual ceremonies. While the celebrations are no religiously denoted, the rituals do have certain religious meaning to them.

The first day is known as Maha Songkran, and is the celebration to welcome the New Angels to their first year. This is the time when Cambodians clean their homes and prepare offerings of food for blessings by the monks in their local temples and pagodas. It is also an important time for those looking for a spouse or life partner, as this is the only day that is traditionally allowed for men and women to mingle. The traditional games of Maha Sangkran are based around the pairing of men and women, and can often end with at least a few new couples. 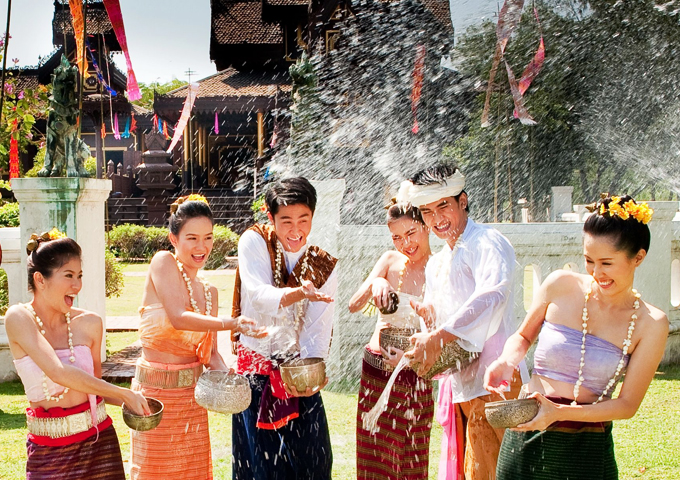 The second day is known as Virak Vanabat, and is the day of remembrance for the elders of the people, both alive and deceased. People sometimes give donations to those that are poorer than themselves as a way of earning merit for their journey towards enlightenment. The people also honor their ancestors in the temples and pagodas with a ritual ceremony known as Bang Scole. Also on the second day, people will build stupas made of wet sand, as a way of remembering their dead ancestors. The stupas are built in the form of the ancient temple of Culamuni Cetiya, the stupa at Tavatimsa which was believed to be the burial ground of the Buddha’s hair and diadem.

The third day, known as Vearak Loeung Sak, is the official first day of the New Year in the Khmer calendar, and the temple priests and monks traditionally bless the small sand stupas that were built the previous day by the people. The statues of the Buddha and the deities in the temples are bathed by the monks and the devotees in the Pithi Srang Preah ceremony. They also wash the elders and revered lamas in the temples, asking them for their forgiveness for any mistakes they may have made in the previous year. This has translated in more recent years to mirror the festivities of the Thai New Year, and water is often splashed over everyone in fun and games, and plaster powders are thrown, covering everyone in a sticky chalky mess.

In Phnom Penh, a royal procession marks the first day of the New Year, and effectively caps off the celebrations with a huge variety of sporting events, including boxing matches, horseracing, and elephant races.

Where can I celebrate Khmer New Year?

Many of the larger cities in Cambodia are less populated during the Chol Chnam Thmey festivities, as the people travel to their home towns to be with families and loved ones. Much of the local services shut down for the three-day celebrations, and if you want to see the true festivities of the New Year, then the temples and pagodas are the best place to be.

In the north of the country, in Siem Reap, the traditional New Year celebrations coincide with another local event, the Angkor Sankranta. With its location so close to the temple complex of Angkor Archaeological Park, Siem Reap takes advantage of the festivities, making it one of the top places to be at New Year in Cambodia. The Angkor Sankranta is a new year festival organized by the youth of the region, which attracts around 1.8 million visitors to the region during the three days of New Year. 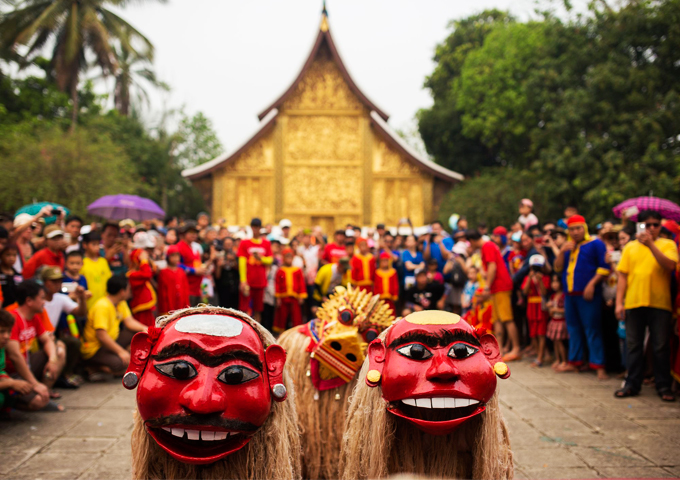 The festivities at the Angkor Sankranta cover four days, instead of three, and include parades, exhibitions, and concerts inside the Angkor Archaeological Park that turn the temple complex into a colorful and vibrant hub of festival activities. The events are open to everyone, and the aim of the festival is to preserve the ancient traditions, culture, and arts of the Khmer people.

Other festivities occur throughout the three days in Siem Reap, including several areas of the city which host traditional Khmer cultural arts such as games, dancing, and martial arts exhibitions. You can also find the biggest parties of the nation in the famed Pub Street district of Siem Reap, where the street parties go on day and night for the entire three days.

In Phnom Penh, the best site to visit at New Year is the Wat Phnom, the main temple of the Cambodian capital, and thousands of local people gather there to pray, offer their donations, and take part in the many games and activities that cover the celebrations. The games also include the throwing of water and chalk powder at each other, and the games can sometimes become a mess of colored powders and wet people.

Much of Phnom Penh and the larger cities in Cambodia treat the New Year celebrations like a western New Year, with parties and festivities in many of the bars, restaurants, and hotels within the city, and include a typical countdown to the New Year. More like a western New Year than a traditional Khmer celebration, the fun goes on for three days, but if you like the more traditional idea, then getting out of the cities to the smaller towns and villages is a much better option.

>> Check the details of Indochina tour with Cambodia