What Currency is Used for Touring Cambodia? 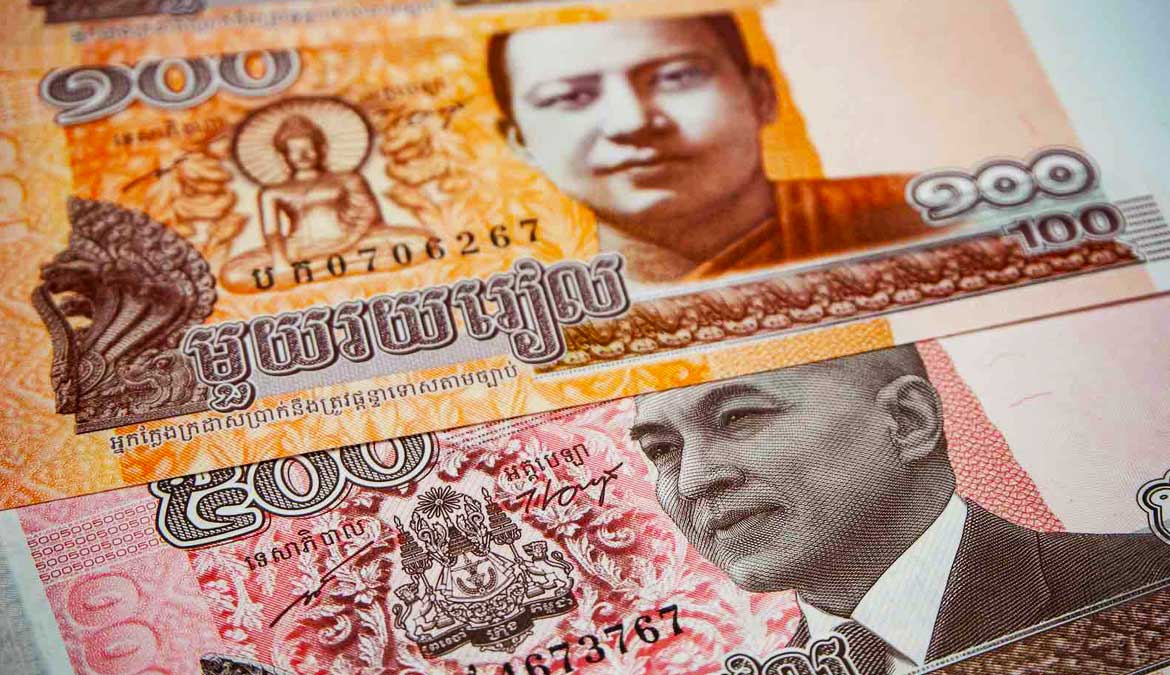 Traveling around the world, there is often a need to exchange your own currency for the local currency in order to pay for things. While this is often the norm in many countries, there are several countries around the globe where the exchange of currency is not always needed. As one of the main currencies used globally, the U.S. dollar is widely accepted in many countries in place of their own currency, and in some instances is even preferred.

The currency in Cambodia has changed many times since the days of the ancient Khmer Empire, and today it is very different from the original currency of the country. Currency has also been used from the surrounding countries, such as China and Siam, and has influenced the currency in later years, until the introduction of paper money by the French.

The main currency of Cambodia is the Riel. However, this has not always been so. The original currency of Cambodia was first introduced during the Khmer Empire, although some coins had been used in the previous Nokor Phnom era of Cambodia, which lasted until the 6th century. The first round coins were made of bronze, silver and gold. 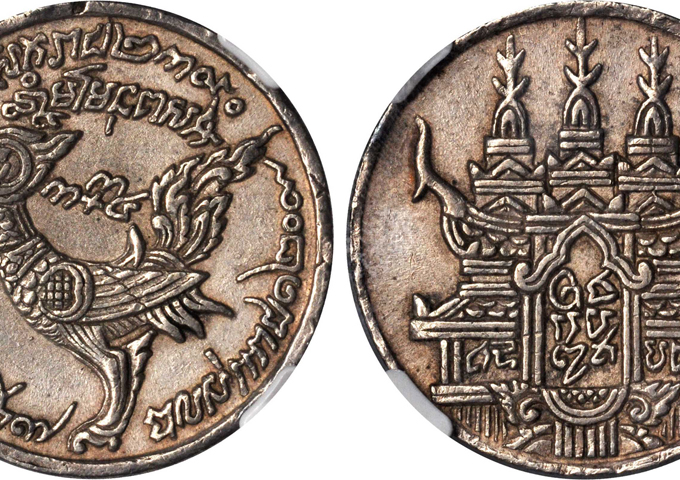 In the Khmer Empire, small cash coins similar to those that were used in China, including a version of the Dragon Dollar that was based on the Spanish Dollar, were used. Siamese coinage was also widely used in Cambodia, and the nation had its own local varieties of the original Siamese Tical, now known as the Thai Baht.

During the French influence on Indochina, France expanded its empire to include Cambodia, which had previously been a vassal state of Siam, and in 1875 introduced the Cambodian Franc to the country. Minted in belguim, these coins were all dated 1860. 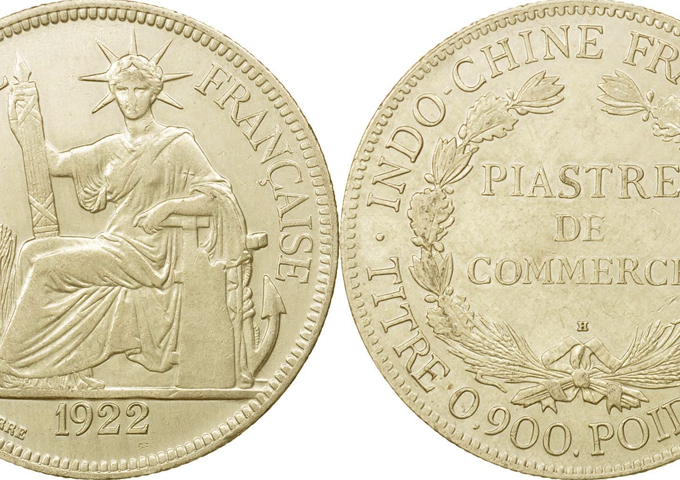 With the further expansion of the French across Indochina, in 1885 they introduced a new currency that would become the currency of the entire region. It was known as the Piastre de Commerce, or just “piastre”. The name came from the old Spanish currency that was known as “Piece of Eight”, or peso de ocho. This new currency was introduced to stabilize the monetary system within their Indochinese colonies and was equivalent to the Mexican Peso.

With the end of World War II came a new birth of currencies throughout Indochina, and in 1953, after seceding from French governance, Cambodia introduced the first version of its own new currency, the Cambodian Riel. Initially, the paper currency bore both denominations, riel and piastre, while coins were riel only. However, in 1955, these dual-denomination notes were taken out of circulation, and the riel became the sole currency of the country. 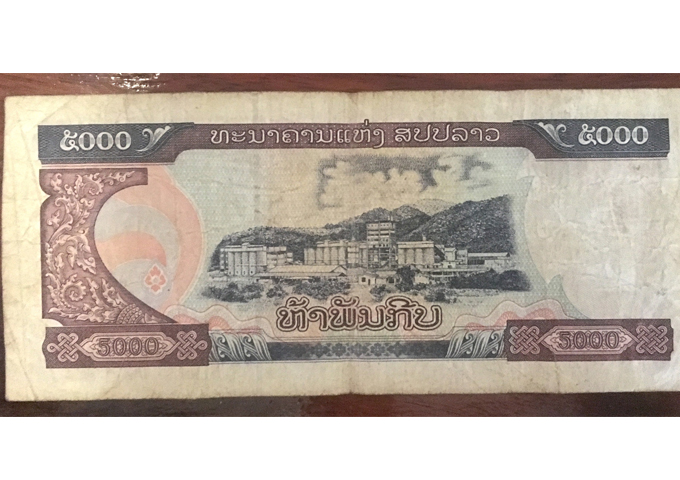 The riel was first denominated in subdivisions of 100 centimes, which was often shortened to cents, but in 1959 this changed to be “sens”. This was the era of the first ever independent currency for Cambodia, and lasted until 1975, when the Khmer Rouge took control. Although the Khmer Rouge did print banknotes, they were never circulated, and money was soon abolished across the country. 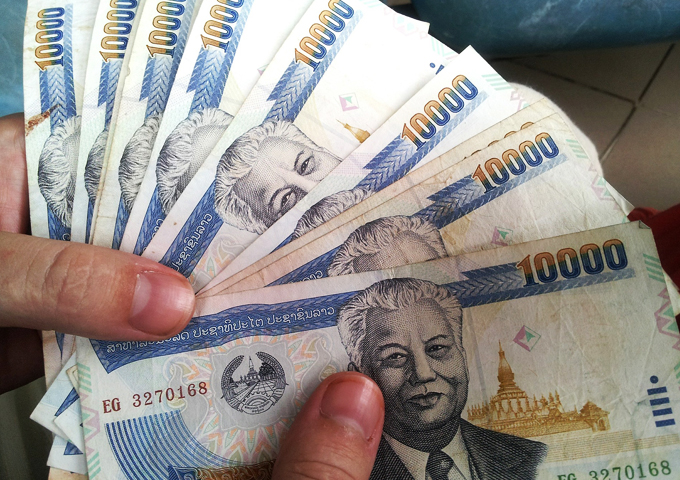 In many rural areas of Cambodia, the riel is used for all purchases, both small and large. However, the U.S. Dollar is widely used in the country, and its use in purchases of larger items or hotel bills is encouraged by the government. The use of the dollar started in the early 1980s, and continued through the 1990s as the United Nations sent dollars as humanitarian aid to the Cambodian government and UN personnel stationed in Cambodia spent their money in US dollars. Currently, payment for a tourist visa in most places is required in US dollars.

As well as Dollars and riel, the Thai Baht is also commonly used in areas along the border with Thailand, and it is common for foreign travelers entering Cambodia across this border to pay for their visas in Thai baht. Excess baht brought across the border by foreign travelers and merchants is able to be used in many areas such as Battambang and Pailin.

The currency exchange for dollars to riel is normally around 4,000 KHR to 1 dollar, a dramatic devaluation since its first introduction in 1953. This does vary from place to place, and some money changers will give as much as 4,100 riel to the dollar. Currency can be changed in almost every bank in Cambodia, and many shops, travel agents, and hotels will also change money for you. However, this is not really necessary in most tourist places as the dollar is accepted almost everywhere and it is hard to get the riels changed back into dollars, and impossible once you leave the country.

It should also be noted that ripped or damaged US dollar bills will usually not be accepted by many shops and banks, and you should reject any damaged or torn bills you get given as change or in money changing. Travelers checks can be exchanged in most banks, although there is usually a 2-4 percent charge. If you are not traveling from the US or do not have dollars as currency, you can change your own currency bills for dollars once you arrive. Banks will charge a fee, and do not always give the best rates. It is advisable to shop around, and the best option is to change larger amounts for small bills in US dollars, as you get a better rate the more you change.

There are ATMs in all the major cities across Cambodia, and they all dispense either dollar bills or Cambodian riel. ATMs are the easiest way to withdraw money from a foreign bank account while in Cambodia, and there is normally a fee of two to four dollars per transaction, so it is best to use them for larger withdrawals only.

There are very few places in Cambodia that accept credit cards. They are usually only used in big hotels and the larger restaurants in Phnom Penh and Siem Reap. Outside these places, they are generally not accepted.

Using dollars for spending is normal in Cambodia, and every shop will normally accept them. However, they do have a habit of giving the change in Cambodian riel for anything less than one dollar in change, as they do not use US coins, only bills. For example, if you pay US$7.50 for an item, you will get two dollar bills and a 2,000 riel bill as change.

Cambodia is a very cheap place to visit, and spending in the country will not require many large bills. Carry small denomination bills, and lots of one dollar bills, as many things only cost a dollar or two. For example, a large bottle of water in a supermarket will only cost around 50 cents, and even a nice dinner can be as little as 10 dollars. Carrying lots of high denomination bills such as 50s and 100s, is not advisable.

All of the tourist-based businesses will accept dollars, and most grocery stores and shops in the cities do the same. Most prices are also quoted in dollars, although some small shops will show the price in riel. these will still accept dollars, though you may get riel as change, especially for smaller bills.

Cambodia is not yet aligned with the use of cryptocurrencies or mobile banking and mobile payments, so if you regularly use your mobile wallet for purchases at home, you can forget about using it in Cambodia. While more of Asia adopts mobile payment options every year, the economy in Cambodia is cash-based, and majority of people do not have mobile phones yet, let alone smartphones and mobile wallets. Some of the more expensive international hotels in Phnom Penh that accept credit cards do have the option for payment using mobile wallets. However, your currency must still be in dollars in your mobile wallet, and only accept them for larger payments such as your hotel bill.

Tipping in Cambodia is not normally expected, but as with any third-world country, tips can go a long way for people on very low incomes. Some of the more up market hotels and restaurants have a ten percent service charge added to the bill, so tipping is not required. Outside those, a dollar is normally regarded as a good tip for cleaners, moto drivers (only on long trips or full-day rentals), and temple donations.